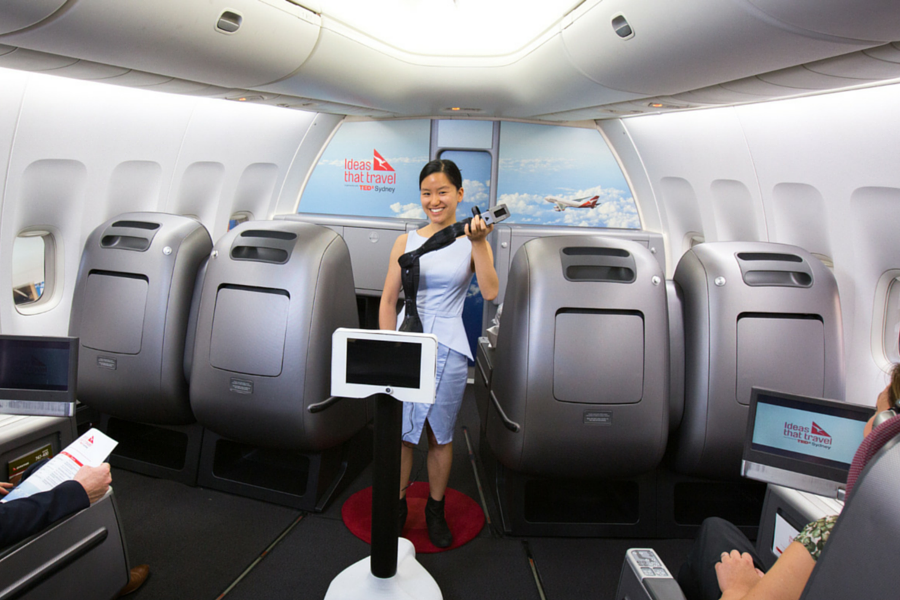 As governments around the country and the startup ecosystem itself look to sell innovation to Australians, brands too are getting on board. Qantas yesterday launched ‘Ideas that Travel’, a partnership with TEDxSydney that saw speakers deliver tech talks from 30,000 feet on a flight from Sydney to San Francisco.

Cheng’s talk focused on how robotics is transforming the way we live and communicate, with a demonstration of her teleportation robot Teleport, while Burston spoke on the gender bias holding women back when they look to expand offshore.

Biercuk’s talk looked at how quantum physics can be used to transform technology, and Howard focused on recent innovations in deep learning and how this may revolutionise the way medicine is practised.

The talks were live-streamed to passengers via the in-flight entertainment system, and are set to be screened during the TEDxSydney event in May. They will also be made available online.

The group of entrepreneurs will be touring the offices of tech companies including Twitter, Facebook, and Google, and taking part in workshops at the Singularity University to help them explore new business opportunities in the US.

Of course, Qantas has something to sell through this TEDxSydney event.

She said, “This is the perfect route for a world-first. We all know about the impact of the California tech boom, but what’s really exciting is the growing number of Australians doing business with Silicon Valley on the one hand, and building a home-grown Australian culture of entrepreneurialism on the other.”

Of course, this isn’t the airline’s first foray into the tech and startup worlds. Qantas partnered with the University of NSW last year to host an innovation challenge, asking students to come up with ideas to make air travel better, and hosted a hackathon at its Sydney Centre of Service Excellence last June.