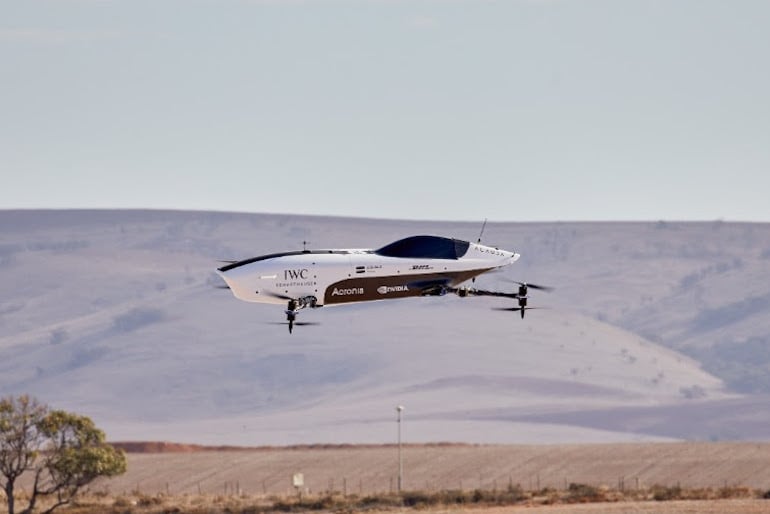 The Airspeeder Alauda Mk3 in flight during testing in South Australia. Photo: Airspeeder

Telstra is getting behind plans for a F1-style racing competition using flying electric cars currently being developed in South Australian by Airspeeder and sister venture Alauda Aeronautics.

The concept of aerial F1 racing is the brainchild of entrepreneur Matt Pearson, founder of both ventures.

Pearson has already collaborated with a a team of experts from F1 and aviation, including Brabham, Boeing, McLaren, Jaguar and Rolls-Royce to build a 130kg, four-metre-long octocopter, the Airspeeder Alauda Mk3 . It will initially operate remotely, with racing kicking off next year, and has the capacity to carry a pilot.

Preliminary testing of the high-speed electric vertical take-off and landing (eVTOL) vehicles has been underway in South Australia this year.

The initial stage of the new partnership will see Telstra, through its technology services business, Telstra Purple, develop flight and ground control systems for vehicle testing and development in a collaboration with Alauda Aeronautics.

Telstra is also working with Airspeeder to leverage 5G to realise the vision for a global race series and deliver new and immersive AR/VR entertainment experiences for fans.

Connecting terabytes of data for vehicle to vehicle (V2V) and vehicle to infrastructure (V2I) communications, Telstra Purple will deliver the near real-time virtual race-control system required for the high-speed, close format, multi-vehicle circuit racing in the Airspeeder EXA series.

The state-of-the-art system feeds essential technical information to ground crews during test flights and races, reflecting the same approach leading aviation companies use to augment and monitor the systems essential for aircraft safety. 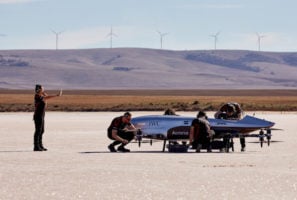 Matt Pearson said the new technical partnership would bring key benefits to racing and the future development of an advanced air-mobility future.

“In delivering on our vision to create the world’s first racing series for electric flying cars we have been drawn to South Australia for some of the very best technical minds from motorsport, aviation and performance automotive,” he said.

“We are delighted to add to this incredible talent pool the capabilities of Telstra Purple. Together, we will hasten the arrival of a new mobility technology that has been promised for generations whilst bringing a new form of motorsport to millions of fans across the globe from some of the world’s most remote and beautiful locations.”

“Key components of Airspeeder’s race control system include private network communications, data visualisation, edge compute power and bespoke app development. Our communications expertise is critical for a sport that is driven by data from the ground up; the high speeds, low latency and high-capacity connectivity of Telstra 5G will change the way car racing is experienced,” he said.

“Just as Formula One has driven innovation for the cars we use today, Airspeeder’s vision for the world’s first electric flying car racing series has the potential to transform the way we move around cities.

Previous article LinkedIn reveals who users think are the best Australian startups to work for, and tech ventures don’t rank highly
Next article Xceptional teams up with Generation Australia to develop neurodivergent tech talent for cloud computing
Via Other tech
Tags 5gAirspeedernewsTelstra