Throwing a Gronade at the fear of AI 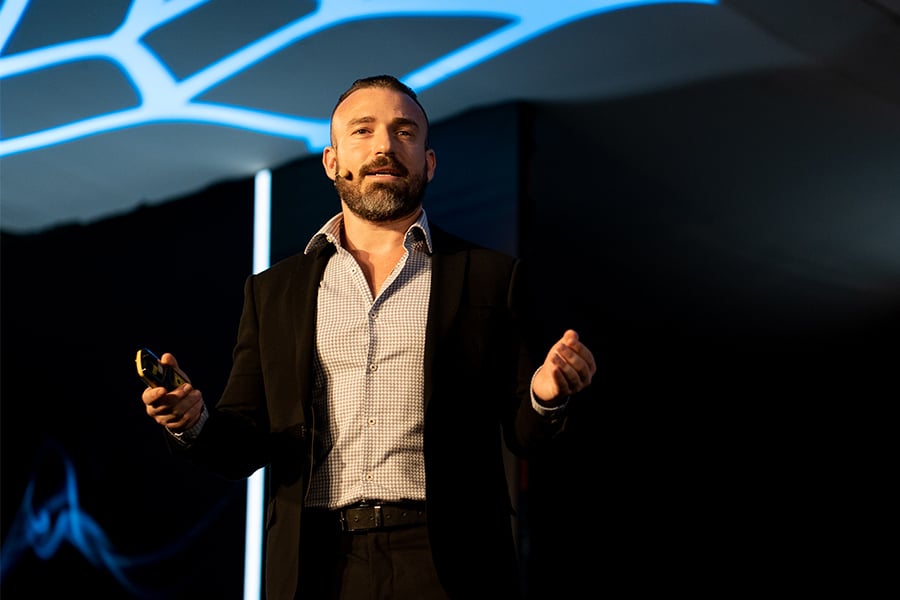 While millions of people the world over are fearing the disruption of the fourth industrial revolution, one Harbour City Labs’ startup, Gronade, is touting its benefits for all to hear.

According to Gronade founder Tomer Garzberg, the emergence of AI and machine learning across all sectors of business will bring with it a brave new world where the five-day work week is a thing of the past and humans are freed from robotic tasks thanks to the power of automation.

Garzberg is so passionate about the benefits of AI he’s even given a TED Talk about it.

“I think what we have to really understand is that the way we think about work is actually not normal, it’s quite broken. We’ve normalised accepting work as this kind of five-day cycle,” says Garzberg.

“When we think about our jobs and what we do, the most rewarding part, the part we celebrate the most, is actually the parts we often do least. It’s the parts where we are at the most human. When we’re being creative, when we’re being innovative, when we’re conceptualising. Yet the majority of our work lives is admin, it’s robotic tasks. Those tasks, they can be automated and they will be automated, because at the end of the day our work life is designed to help our organisations capitalise on the market.”

Garzberg suggests if you’re able to look at your work life and go, ‘okay, the most rewarding parts of my work day is actually the parts where I am the most human’, you will soon understand technology is liberating us from the mundane.

Indeed he suggests the way technology is disrupting how we do business is simply a case of history repeating itself.

“Artificial intelligence is just a new piece of technology that’s actually increasing the efficiency of our workforce. It used to be physical machines, now it’s a digital machine,” he says.

Although Grazberg insists labelling AI as ‘intelligent’ is a misnomer

“Artificial intelligence is literally just a marketing term. It’s basically allowing machines to process work where a machine is better at doing it than a human. The idea is that operationally we just can’t afford to have people do unfulfilling, robotic tasks anymore, that’s just not how you progress a population.”

Garzberg believes it is less ‘the rise of robots’ that people find worrying so much as the uncertainty of how technology will impact their jobs and job prospects. Nonetheless he says the adoption of AI and machine learning is inevitable.

“That inevitability creates change and change always creates opportunity. Statistically they are saying 70 million jobs are going to go to the future of work by, I think, 2025. But what a lot of people don’t see is that it’s going to create 150 million new jobs, but we just don’t know what they are yet. It’s that uncertainty that people are uncomfortable with. It’s not the technology,” he explains. “Comfort’s really our biggest killer. It’s the thing that stops not only organisations progressing but also everyday people.”

Challenging this status quo is something Garzberg and Gronade do best. Garzberg tells Startup Daily he first came up with the idea for Gronade after spending an extended period in the tech scene in Israel.

“The most incredible thing that I saw while there was how much data formed the heart and soul of these organisations and ventures. Without that data, it would be nothing. You look at machine intelligence, artificial intelligence, without data there is no machine intelligence. The importance of data and what you can do with it really stuck in my head and then I realised it’s also reciprocal. You can have all the data in the world but if you don’t know how to analyse it ,you don’t have that machine learning to help you find the insight.”

He says it was this realisation that spurred him to launch Gronade. The startup specialises in assisting businesses to realise their potential by utilising the power of machine learning, data analysis, AI, language processing and robotic solutions to optimise processes and achieve revenue growth.

“Bringing that type of, almost blunt, aggressive execution focus to an organisation which has endless amounts of data is I think a match made in heaven. And that’s kind of where Gronade came about. It’s the vibe we’re going for: growth and grenade equals explosive growth, it’s a gronade. It’s like when you’re done talking about it, come speak to us and we’ll do something about it.”

Gronade has experience its own explosive growth in the three and a half years since Garzberg first launched the startup. Today Gronade’s services are harnessed by some of the nation’s biggest corporates including Westpac and PwC. Garzberg tells Startup Daily moving to the Harbour City Labs scaleup space at Barangaroo has proved immensely beneficial for the startups’ image.

“We had one customer we brought here stop and say, ‘wait, hold on a second, how much is this going to cost again?’” Garzberg laughs.

“It’s a really nice space. I think sometimes, when you’re dealing with corporates in particular, they derive confidence in you and your services from a variety of different things. Oftentimes it’s not really what you say, it’s all this peripheral stuff.

“So they go, ‘okay, well these guys, they work in a nice space, and they’ve got all these other large clients, and they feel the risk is significantly reduced. It’s not just some guy in his underwear at home. Being at Harbour City Labs at Barangaroo does add clout to what you’re selling.”

Garzberg says the relationships he’s developed with other startups at Harbour City Labs has provided opportunities for collaboration too.

“We’re partners with a couple of startups here. We’ve built a pretty interesting reputation. We’re still relatively underground, like I said, we’re not a front-end organisation. When people want pedal to hit the metal, where they actually want to execute; that’s when we’re top of mind. So that works really well regardless of whether we’re working with organisations that are similar to us in this space, or in the corporate sector.”

Find out more about Gronade here.