Steve Baxter reveals why he invested in Clipchamp, which is now being snapped up by Microsoft 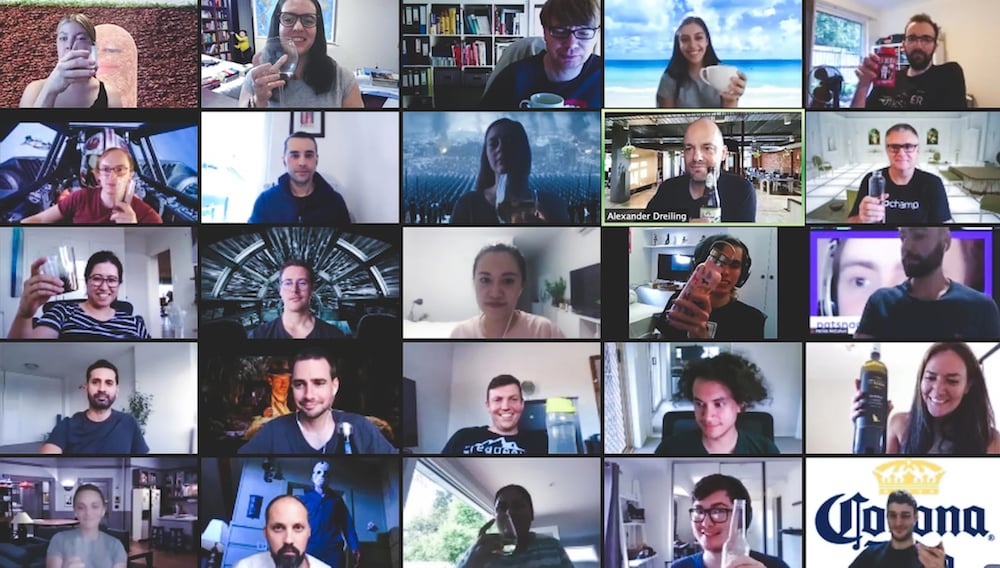 The Clipchamp team living their best Zoom life in 2020.

The following is part of a lovely note sent out to all shareholders by one of the founders, Alex Dreiling, when trying to use my own words as an intro – I failed to find better words, so I am using his:

“What an amazing outcome! And what an exciting journey ahead! I would like to sincerely thank all of you. Regardless of the stage you joined as a shareholder, you supported us when no one else would and I’m very happy we were able to drive this result for you. Please keep investing in the startup ecosystem, there are many more of us out there!”

Walk into an early-stage investor’s office and pitch the world’s biggest distributed supercomputer. The idea was that logic could be embedded into a website that would make a browser do computing tasks for others –  in their first use case to distribute the task of transcoding videos on behalf of content owners – sort of a large distributed ‘SETI at Home’ for the masses.

The team was great, the tech was awesome, but the application was ordinary, bordering on malware (given that the system did not explicitly ask the user whose computer and browser was being used for permission), and as such the team departed from my office without an investment.

See the deck here from their first engagement with us:

But they kept in touch.

Fast forward 3 years and their great tech had been transformed into Clipchamp Utilities, a set of easy-to-use web tools to compress, rotate, and do other things to videos and do it easily. They started gathering users, millions of them, beginning with 1 million in a very short period of time.

As with many success stories, the path was not straight – they had done a nice pivot, were onto something useful and users were responding.

We decided to join the journey in an investment round at this point in 2017, taking out the last portion of available allocation via my family office, Transition Level Investments. This was where we started to work closely with the Clipchamp founding team.

Supercuts, later rebranded to Clipchamp Create became their hero product – a lightweight, browser-based video-editing tool for the masses – the Swiss-army knife of video editors that could be used by anyone to start creating quality video content.

Now this was the deck that we invested on:

It did help that Clipchamp had taken a tenancy in The Precinct in Fortitude Valley, the startup space in Brisbane, Australia, which so happened to be right across from River City Labs, which I owned at the time.

One of their awesome hacks was their floor-to-ceiling projection onto the wall which showed a global map and logged their user count and location for users signing up in real-time.

The big graph of growing user count, going up and up:

This was a great tactic – it really kept me and others engaged and proved they were a company proud to show their progress to all who wandered past.

Other investors were braver than us though – we did not invest in the first 2 rounds, Alex, Dave, Soren, Tobi, and team were supported by local angel investors early on and the fantastic group who backed this team deserves congratulations for the longer journey they have been on.

From the early days, we could see they were onto something. Their original video platform continued to drive organic traffic and they were acquiring users. They had millions of users from hundreds of countries around the world, finding them organically and loving the product. When it came time for their next round, we helped the team prep and they did the rounds to raise a $5m Series A from the Australian VC ecosystem.

Clipchamp Create was early on in the journey, they had launched their full creator platform but were still proving usage and monetisation. Given the stage, most investors passed awaiting more traction, thus it came back to us to make a decision on whether to lead their post-Seed round – we dived in putting in one of my largest family office cheques to keep the business ramping.

I joined the board at this stage alongside the founders and we got to work helping them build their rocketship.

Anyone that heard about Clipchamp in passing would often remark how the software reminded them of a similar business popularised by a certain category defining TV Show.

The team started to level-up as you always want with founders that you support and their traction did not go unnoticed. They were adding awesome team members such as Anna Ji (ex-Tyro) to lead growth (and then product).

They gathered the interest of Seattle-based Series A fund Tola Capital. Tola inbounded them after one of their team (who loves video) used their Create product online. Within weeks they had a lead term sheet on the table for their Series A, and the guys jumped at the opportunity to work with a reputable US lead fund and launch their international playbook.

Closing their AU$13m Series A, Clipchamp was off and running.

Tola who led the Series A were an amazing crew. Working with Sheila, Stacey, Aaron, Akshay and the team made the experience all the richer. The level of questioning, analysis, and contacts they brought as well as their awesome introductions to great hires in the US, at a time we could not travel was very material to Clipchamp.

Every startup has some great highs and some lows to help balance it all. What sticks with me the most is the ups and downs of living at the hands of search engine traffic. Clipchamp has an amazing organic engine of lead flow given their high search ranking in relation to video-related search terms.

At one stage, the traffic generation and corresponding sign-up rate from Google search was instantly flat-lined by one of the more notorious ‘algorithm changes’. This happened more than once, but the team became exceptional at picking it up early and working on remediation to ensure its effects were short-lived, but fair to say I can still recall that ‘blood run cold’ sensation when on calls or getting messages where search engines were mentioned!

That speaks to one of the things we really liked about the team and systems that Alex and his co-founders built – they watched what drove the business like hawks. We knew that from their public display of growth that we saw each time we walked past their office but the level of visibility as to what was driving traffic, where users were going to and coming from, deep cohort analysis, and more gave us re-assurances that this team was across the detail and were all about optimisation.

The Clipchamp exit is also an important event for our TEN13 syndicate platform, it was only the 3rd deal we did, we also launched it 9 days before Christmas in 2019! (clever right?). It was a sporty time of year but the deal could not wait.

My first two investments in Clipchamp were before TEN13 existed, and as such, it was only the 3rd round (Series A) that we shared with our platform investors on TEN13. TEN13 comes with lots of commitments to investors, I underwrite deals (the startup always gets their capital), I back the deal with a material, if not the largest, cheque and all deals I do in tech startups go on our platform.

Clipchamp was a great deal to offer up to TEN13 and as our first exit, it makes it all the more special. To the 22 (of 36 total investors in TEN13 at the time) other investors who backed Clipchamp via TEN13, I say thanks for trusting us with your capital, it has been awesome to provide you with a return in less than 2 years.

The Clipchamp story is not over, the amazing tech and vision of this product will live on and be exposed to tens of millions more. Through the amazing reach of Microsoft, its installed base will see this awesome tool in hands of creators to help tell stories in video as was the guiding ethos of Clipchamp. We hope to see the Clipchamp become the Microsoft ‘C’ next to the well-known ‘E’, ‘P’, and ‘W’!

To the now 300 investors in TEN13 we hope to provide you more of these events in the future. If you’re a sophisticated investor or wholesale investor and want to join us on the next Clipchamp journey sign up here.

Well done to Alex, Soeren, Dave, Tobi, and the whole Clipchamp team, it was a pleasure to be on the flight with you. We can’t wait to see what you do next.

If you want to hear the story told first hand and ask myself or Alex about the journey we are hosting a AMA next Thursday from 12 pm AEST. You can sign up here.

Previous article Startup Daily TV: The threat to startups from ‘debanking’ – fintech’s cancel culture
Next article Why home quarantine Covid apps are a bad idea – and critics are right to call it ‘Orwellian’
Via Advice
Tags Clipchampcontributor postinvestingmicrosoftSteve BaxterTEN13