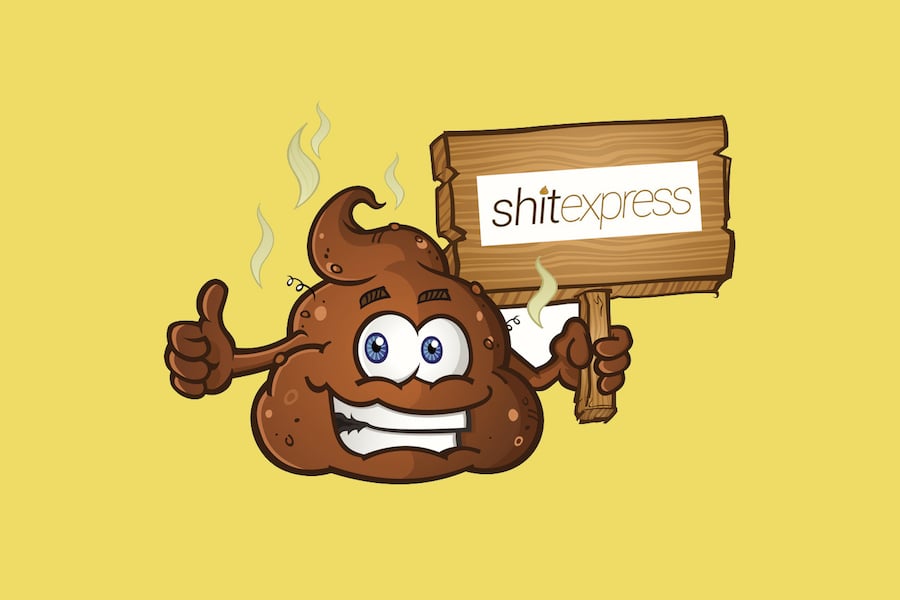 A life coach, or somebody of a similar non-profession, once said ‘never hold a grudge’. But, in case you do hate someone, shit delivery startup Shit Express is here to accommodate. At first glance, what’s impressive about Shit Express is its succinct tagline: “Send a piece of shit in a box to someone”. In a short sentence, the startup has summed up its entire business.

Currently, Shit Express is only delivering horse shit, but plans on diversifying its offering to include the waste of other animals. Given competitors like PoopSenders go to the effort of collecting and delivering gorilla and elephant shit, product diversity will surely be a smart business move. For now, though, horse shit still garners the same “oh shit, it’s shit” reaction.

At the moment, customers can request a personalised message to be included in the package, and even choose between smiley or angry face stickers. The packaging can be plain and none-telling to enhance the recipient’s level of surprise.

According to ShitExpress.com, packages are delivered worldwide using traditional postal services – and this is where things get legally problematic. According to Australia Post, the “transmission by mail of offensive material is an offence punishable by law”, meaning that Shit Express could be seen as facilitating illegal activity. However, what is considered ‘offensive material’? Normal bodily waste? A box of shit can very well be a stool sample used for scientific or diagnostic purposes.

Then again, animal shit is classified as hazardous material and therefore subject to strict packaging and labelling requirements. It needs to be packed in specific types of containers usually available at pathology collection centres, be completely sealed, and have a warning label. The sender must also provide advance notification to facilities which will be handling the item.

It doesn’t appear that Shit Express follows all these guidelines. But given the number of people who have successfully delivered shit to their enemies or joke victims, it wouldn’t be difficult to assume that both Australia Post and United States Postal Service don’t examine items that closely – perhaps for privacy or efficiency reasons. Even Sharon Osbourne sent shit in a Tiffany box successfully on numerous occasions, not that she’s a shining example of a conservative law-abiding citizen.

The reality is, there are a number of players in the market that package and deliver shit. According to Vice’s sub-publication Motherboard, MailPoop pioneered shit delivery in the early 2000s but was outshone by its successors including ShitSenders, PoopSenders, SmellyPoop, I Poop You, and others with more discrete names.

So why then has Shit Express entered, what appears to be, a crowded market? Well, what makes the startup unique is its payment system. Customers are required to pay with bitcoin – precisely 0.05 bitcoin, which is about US$16.50 to not only guarantee the sender’s anonymity but also the founders of the company.

Given the legalities around sending boxes of shit is blurred (if not illegal) and the fact that we leave a digital footprint everywhere we go, Shit Express is safer than other services that require a credit card.

This was noted by Motherboard journalist Jason Koebler, who wrote: “What points Poopsenders.com wins for variety of species (cow, elephant, gorilla), it loses for requiring a credit card, casting doubt on whether the company can truly guarantee anonymity (in a post-Snowden world, no less). Ipoopyou suffers from that same conundrum, while also having an extremely long legal disclaimer that turns me off from the endeavor entirely.”

Koebler bravely purchased and sent a box of shit to himself in his first ever bitcoin purchase. Two weeks following the order, Koebler received horse shit in an air-tight plastic container, accompanied with a note on the side of the package saying “I hate your guts”.

On top of the package, there was a standardised note which poignantly read:

“I received a horse shit, what now?

At first, think about yourself. Someone sent it to you probably because you hurt or insulted a person, consciously or unconsciously.

Take a deep breath, nothing bad happened. You should just try to be a better person.”

Upon further reflection, there appear to be opportunities for farmers to capitalise on this supposed demand to send shit anonymously. They have to deal with shit day-in and day-out, usually disposing of it. Although they’re able to make some money from selling cow manure to environmentally-conscious gardeners, what about chicken poop? Surely it could be packaged neatly and sent off as a gift. Politicians could indeed become the most popular recipients of boxes of shit.

When you consider it closely, the shit delivery industry shows how progressive our society is. We may say shit every now and again, but at least we don’t throw shit at each other’s heads. We’re civilised human beings who use the internet and cryptocurrencies to anonymously purchase and send animal faeces in neatly-wrapped, professional-looking packages. We’re so level-headed, we’d rather send shit than confront our enemies. Aren’t we a sophisticated bunch?