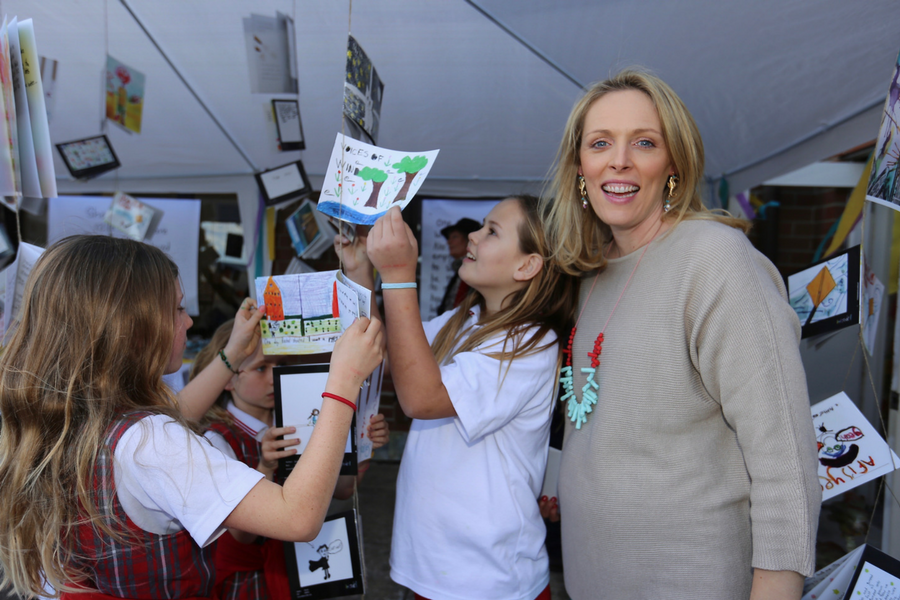 Many an adult would be able to recall a time where depicting a hand meant attaching three to five extra lines to the arm of a stick figure, and for most of us, our drawing skills haven’t improved all that much since. Beside these imaginative artworks would often be a story – a snapshot of how you thought many (or many-many, depending on your age) years ago.

Nearly of all of these stories, however, were likely soon lost to the recycling bin, meaning they never saw the light of day beyond a handful of readings.

Looking to encourage kids to create, share, and hold onto the stories they create is Sydney-based startup Littlescribe.

By taking a few photos of their work, Littlescribe’s app allows kids or their parents to digitise the stories they create, with the platform meshing each page together to create a book.

Kids can form “book clubs” to share the stories they create with either their family, friends or classmates, as well as order a printed version so they can keep and read a physical copy of their own book.

Members of a book club can, either from the app or an the Littlescribe website, leave comments on each other’s books, order a printed version of another member’s story, and add in new club members to expand their community.

For the startup’s founder, Jenny Atkinson, Littlescribe serves as a way to break down the barriers kids face in accessing books to read and building literacy skills.

“What this is doing is not only allowing kids to develop the writing, illustration, and literacy outcomes that we’re looking for, but they can also read other kids’ books, meaning we’re really playing with the concept of repetition – reading, writing, sharing, regrouping then creating another book and beginning that process all over again,” she said.

By sharpening literacy and reading skills early on, Atkinson said the startup will be able to bolster these skills for later on in each user’s life.

Development of literacy and reading skills within schools, according to the latest PISA report released late last year, have been slipping during recent years. Atkinson said the startup wants to turn this around.

After seeing both her daughter and her friend were writing stories together, Atkinson was asked by her daughter to help her publish the stories – one of which was perfectly titled ‘The Oboe-Playing Bum’ – for others to read. Seeing no solution available to publish the story, the entrepreneur conceived Littlescribe, an app allowing kids to digitise their work.

After discussing the business concept with her daughter’s school teacher, the two decided to partner together. Working on the startup side-by-side, the concept for Littlescribe evolved, with development supported by a grant from Jobs for NSW.

Key to informing how the app works, and working beneath the surface of Littlescribe, was the idea of overcoming the “bad barriers” that society has placed against writing, reading, and sharing, explained by Atkinson.

“There’s some really deep educational stuff here surrounding purpose. Kids play and practice sport and music, then go and play or perform these activities in real life. We don’t say to them that if there’s a mistake, you can’t perform til later until you’ve perfected it. But when it comes to being an author, we’ve created all these rules about who can be an author,” she explained.

“One of the big rules is that if I’ve spelled something wrong, it can’t be published and I can’t be an author. We treat these kids exactly like an author, so if there book goes large, then we want to honour it and share it with the world.”

Aside from book club members, books can also be printed by schools, both singularly and in bulk. To encourage schools to order printed copies of stories they love for their students, the startup offers a discount for bulk purchases, starting at $7, nearly a half the cost of the starting $12.50 for a single copy print.

Costs for a printed book increases in increments based on the size and page numbers, supporting books up to 60 pages long using A4 page size.

Teachers or schools are able to purchase a paid version of the app, which grants them access to a suite of tools including a spelling challenge, where students are tasked to read their own or another student’s book before fixing any spelling errors. Teachers can then see which words are missed, and deliver feedback to students based on the outcome.

The premium version also holds a dictionary and ‘scrolls’ feature, a word challenge as well as a number of other tools. All other functions on the platform are free, as part of the startup’s aim of reducing the access barrier surrounding books and literacy skills.

To expand upon this goal of what Atkinson calls “megabonkeramus”, or creating a culture of writing and creativity, Littlescribe is working beside NGOs including Mission Australia, the Sydney Children’s Hospital, and Welfare West, to encourage kids to write and share their work with others.

Having only launched earlier this month, Atkinson said that she now wants to talk to corporates, politicians or “bigscribes” about collaboration opportunities to expand the network of Littlescribe writers.

By working with influencers, the startup is aiming to have every child in Australia writing their own story by the end of 2018.