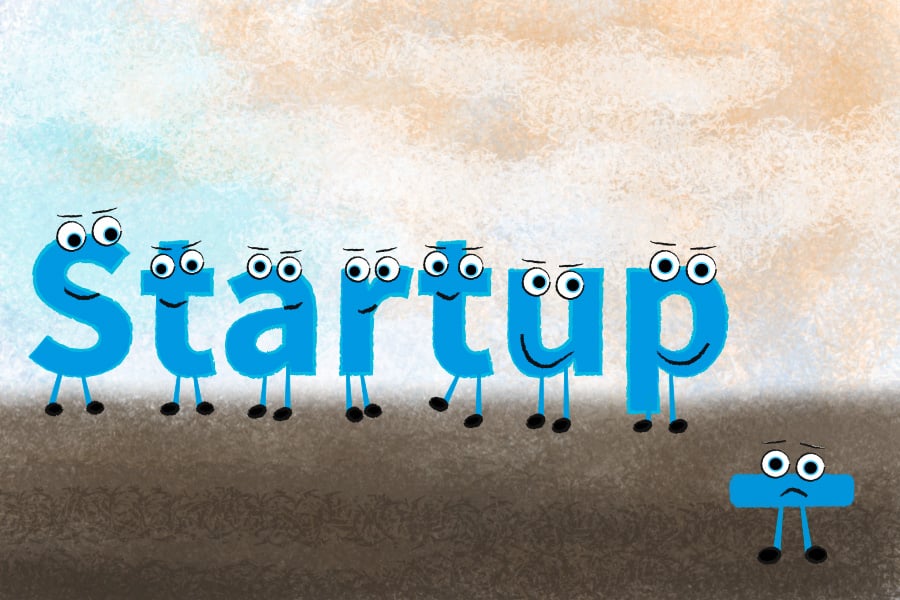 Despite objections from the startup community, many established and reputable media outlets and public relations representatives in Australia are still spelling startup as ‘Start-Up’ or ‘Start Up’. It may not seem like a big deal, but it’s 2015 and it’s no longer okay to insert a hyphen or a space in between ‘start’ and ‘up’.

Judging from a brief Google search, the humble beginnings of the ‘Keep the hyphen vs. Drop the hyphen’ startup debate dates back to at least 2010. One of the first advocates of ‘startup’ was Brad Feld, investor and Managing Director at Foundry Group in Boulder, Colorado. In a 2012 blog post, he wrote:

When I created Startup Revolution and began writing Startup Communities, I insisted with Wiley (my publisher) that the word be “startup” and not “start-up” or “start up” or even “StartUp”. It took a while to (a) get everyone to agree to that and (b) expunge the efforts of the copy-editor to reintroduce some gross variant of “startup” but I finally got it done.

The United States is ahead of Australia when it comes to the spelling of startup, which in retrospect, is unsurprising given they also have more advanced startup ecosystems.

In Australia, it seems journalists and press release writers are playing it safe by adhering to old dictionary rules. Both Oxford and Cambridge dictionaries spell startup with a hyphen. But ‘selfie’ was added to the Oxford Dictionary in 2013 and we’ve moved on from spelling email as ‘e-mail’, so it’s not too far-fetched to say change is overdue.

First, let’s quickly recap what a ‘startup’ is. The term startup is almost synonymous with high growth and innovation. StartupAUS, the non-for-profit body formed in 2012, defines startup as an emerging high-growth company that is using technology and innovation to tackle a large and often global market. The two defining characteristics of startups, according to StartupAUS, is: 1) they have great potential to grow (or in other words, are highly scalable); and 2) they create disruptive innovations that often reshape the way entire industries work.

To start up a business, which requires no explanation, is different to being a startup or founding a startup.

When spelt with a hyphen, ‘Start-Up’ appears to be a compound noun. A compound noun is made up of two or more words; and hyphens are generally used to clear up ambiguities. Take water-bottle, for instance. Water bottle (with a space between the two words) implies that the bottle is made up of water. If you put a hyphen between the words – water-bottle – then it indicates that the item (‘bottle’) is not made up of the substance (‘water’). Same goes for ‘changing-room’, which usually does not refer to a room that is changing, but a room in which you change.

‘Start Up’ (with a space) assumes someone is starting up a business. As established earlier, startups are not necessarily businesses that are being started up. They could be three years old, five years old, or even 10 years old. As long as they’re highly scalable but haven’t reached scale or tipped over the edge, they’re a startup – an example is Sam Chandler’s Nitro. When they’ve reached scale, the way Google and Facebook has, they’re no longer startups; they’re large companies. But they once were startups.

As such, ‘Start Up’ creates ambiguity. Are we talking about a business that’s just launched yesterday or a highly scalable innovative tech-powered startup? Although the hyphen is typically used to clarify ambiguities, in the case of ‘Start-Up’, it doesn’t. Because startup is no longer considered, or perhaps never was, a compound noun. Its spelling just so happens to contain ‘start’ and ‘up’, which are standalone words. These two words are irrelevant to the definition of startup; and having those two words separated by a hyphen suggests those standalone words have relevance.

It’s a matter of decency. If startups want to be called startups, then call them startups.

Let’s think of people with names like Mary Jane or Emily Rose. Unless they use hyphens themselves, don’t just put them there. It’s rude to misspell somebody’s name.

It might be an inappropriate example, but let’s just use my name. It’s Tasnuva, not Tas-Nuva … or Tasmania or Tasmanoeuvre or anything else that I, the owner of the name, don’t want it to be. Obviously, startup is different in that it refers to a particular type of business, rather than an individual, but with a little bit of stretching of the imagination, the same logic could apply.

Let’s get really imaginative and place the problem in the context of race. Many South Asians don’t like being referred to ‘curries’ or ‘curry-eaters’. I personally have no problem with it – my background is Bangladeshi – but if a community does not like a certain term, it’s quite reasonable for the rest of the world to not use that term out of decency and respect to the community.

Caitlin Fitzsimmons, Editor of BRW and winner in the category of Best Technology Industry Journalist at the recent Optus IT Journalism Awards, said on Twitter yesterday that the reason why ‘start-up’ is still used in Australian publications like BRW is because it has “more Google results … so adopting ‘startup’ would’ve incurred SEO penalty”. She also said that “there are protocols” that journalists need to follow. In her defence, Fairfax Media’s (formerly John Fairfax and Sons, then John Fairfax Holdings) origin dates back to 1841 when John Fairfax bought The Sydney Morning Herald. Over time, the media giant has surely established rules and systems that internal staff cannot ignore.

I’ve experienced the same when writing for online publications in the past. It was never sufficient to just write a good story, it had to be SEO-friendly. Admittedly, I’m a self-proclaimed disliker (possibly even hater) of all things SEO. I go by the philosophy: ‘Tell the story. Fuck the SEO’. I have no understanding of the intricacies of Google’s always-changing algorithm, and my ignorance is largely why I don’t like SEO.

I mean no offence to journalists and editors that optimise their articles. There are good reasons for that – namely, directing traffic from search engines to your content. This is important because website traffic has an impact on the financial prosperity of the publication. Among other things, online publications rely on advertising revenue. Advertisers want to know that their message is being seen by as many people as possible.

When Fitzsimmons explained her reasons for using ‘start-up’ in her articles, others came into the conversation, and in my opinion, it took a wrong turn. All of a sudden, it was all about whether ‘startup’ or ‘start-up’ has better SEO results.

A number of participants in discussion provided screenshots of trending patterns across the variants ‘startup’, ‘start up’ and ‘start-up’. Although everyone used the Google Trends tool, the results were different. Our search shows that ‘start-up’ (red line) is barely on the map: 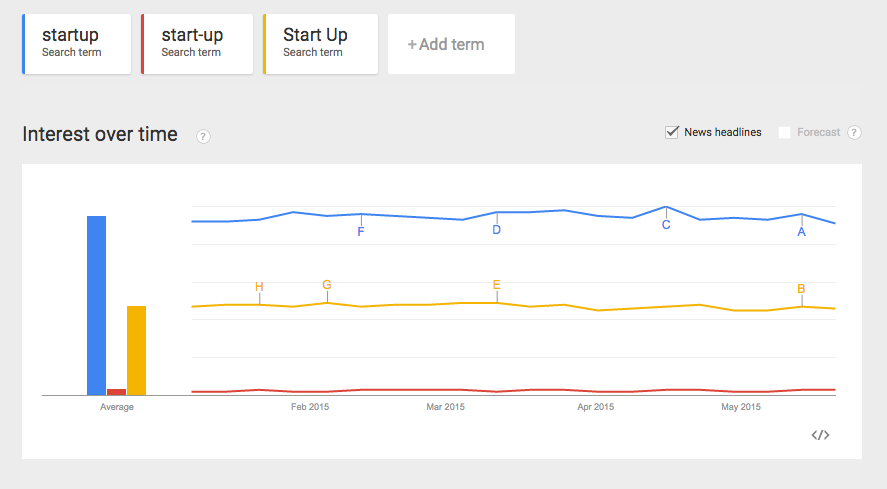 Google Trends results for startup, start-up and Start Up.

It’s worth noting that SEO and Google Trends are not the same, though probably have some kind of mysterious relationship.

Andrew Hyde, Startup Week Founder at UP Global, referred to ‘start-up’ as “the hyphenated bastardization of an industry [he loves]”. There are many more founders who find the hyphen offensive to some degree or another.

By using the hyphen, we are disrespecting them. If the ‘public’ or ‘audience’, including startups, want their name or title to be portrayed a certain way, it’s only fair that journalists, who represent the interests of startups, respect that.

When will the battle to drop the hyphen in the word ‘startup’ come to a close? Betabeat (now Observer) made the transition in August 2011. Washington Post last used ‘start-up’ in December 2012. TechCrunch moved on at some point in 2013. Both Startup Daily and fellow Australian niche publication StartupSmart have also moved on from the hyphen.

If startups are changing industries for the better and strengthening economies, the least we can do as a tiny token of appreciation is drop the hyphen.