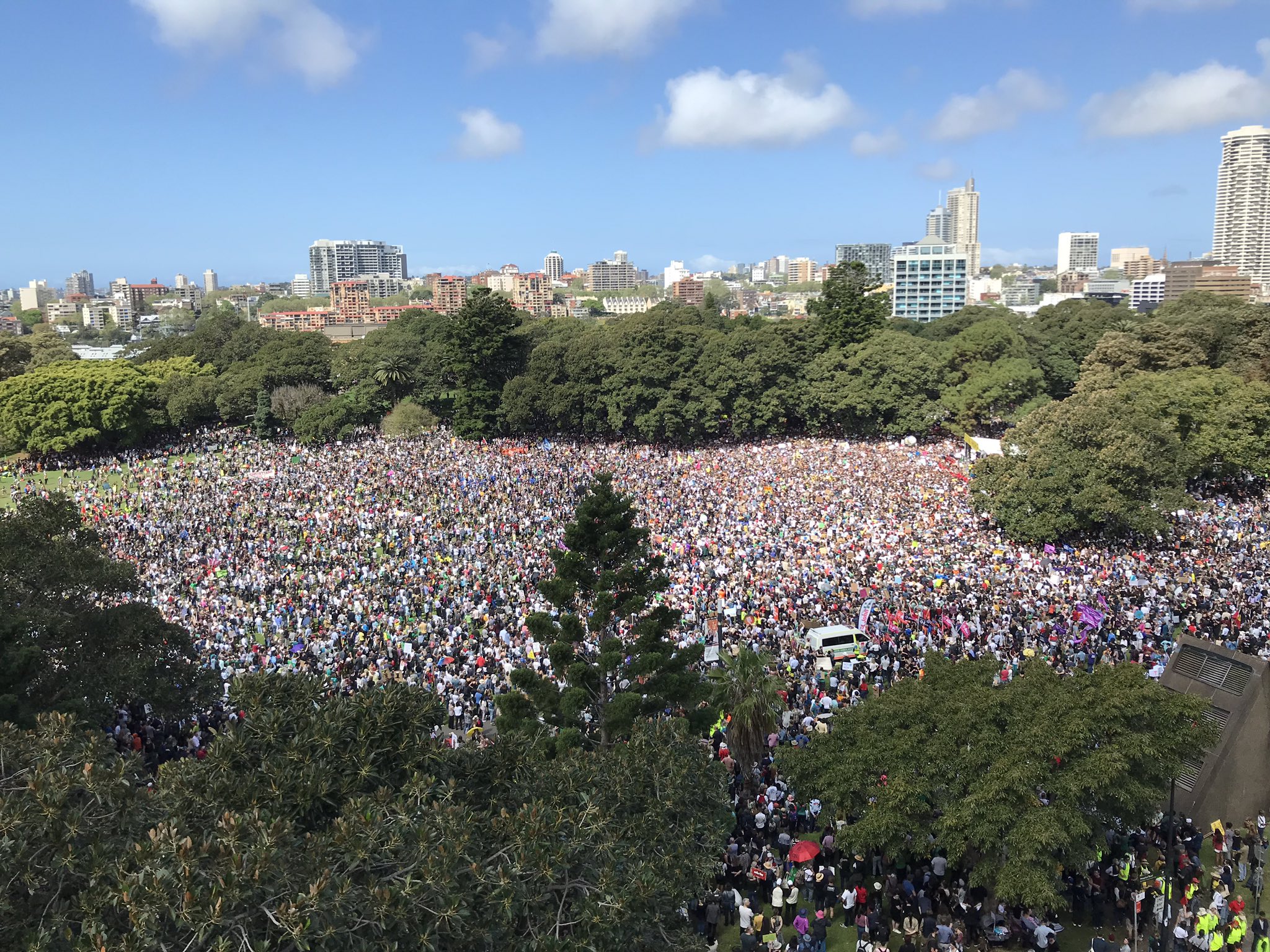 OK, so this isn’t startup news, per se, but here at Startup Daily, we spend a lot of time talking to founders about leadership, values and company culture – the beating heart and brains of a business that set its path to success.

So when someone pointed out what the headmaster of Sydney’s Newington College had to say about why he was backing the students wanting to attend today’s climate change strike, we paid attention.

After all, Atlassian’s billionaire co-founder Mike Cannon-Brookes is the product of Cranbrook Sydney, and is now an outspoken tech community leader in the debate over climate change.

Today’s protests and strike come at an interesting time in the ongoing debate over civil disobedience.

Over the last six decades, Australia has seen some notable examples.

The 1965 “Freedom Ride” through NSW country towns by University of Sydney students in bus in the fight against racism came two years before Australians voted overwhelmingly to include Aboriginal in the census. It was a fraught on many fronts, and events, led by Charlie Perkins, came to a head in Moree, where Aboriginal people were banned from using the local swimming pool. They took Aboriginal children to the pool in a major confrontation. The rules changed the next day.

In 1971 protesters against apartheid in South Africa invaded the SCG during a rugby match against the Springboks. One of them, university student Meredith Burgmann, was jailed for two months as a result amid establishment fury that a sports event had been disrupted. She later, in correspondence with Sir Donald Bradman, helped persuade him to abandon Australia’s tour to South Africa. Another two decades passed before the apartheid regime was dismantled.

In 1979 at Terania Creek on the NSW north coast, west of Byron Bay, protesters stood in the path of bulldozers – or chained themselves to them – to stop rainforest logging. It was a bitter fight with many arrests, violence, death threats and arson until the NSW government under Neville Wran intervened in 1982 and saved the area. Terania Creek is now part of the World Heritage-listed Nightcap National Park.

In the late 70s until 1983, a small band of environmentalists led protests against plans for a dam in the Tasmanian wilderness on the Gordon below Franklin rivers. It spread to become a national protest, gave birth the Greens party under a Tasmanian activist and GP, Dr Bob Brown, and ended 8 years of the Fraser Coalition government. The lower Gordon River is now part of the Tasmanian Wilderness World Heritage.

They’re just four reminders that as uncomfortable, and sometimes ugly, as things seem at the time, in the longer term, those who stood up and protested ultimately stood on the right side of history.

Which brings us to today’s student-led Strike for Climate. It’s remarkable to see young people so articulate and so passionate, but then the sense that they’re fighting for their literal survival is palpable.

In Sydney, more than 50,000 people turned out in The Domain. In Melbourne, organisers expect 100,000 – the sort of crowd next week’s AFL grand final will host.

OMG the #ClimateStrike is SO big in Melbourne. Crowd estimates coming in at 100k! pic.twitter.com/UpnQHVoB2r

And it’s not without irony that many who accuse younger generations of indifference and “slacktivism” suddenly appear outraged and offended when the students quite appropriately press for their right to be heard.

But what’s heartening is the willingness of those older and in authority to listen to their voices, just as the great and thoughtful Don Bradman did nearly 50 years ago.

At Sydney private girls school SCEGGS, Head of School Jenny Allum changed her position and allowed students to attend with permission from their parents after “two of the most impressive young adults you could ever wish to meet… thoughtful, considered, intelligent, well-informed… empathetic” – SCEGGS alumni – met with her and put the case.

At Sydney private boys high school Newington College, new headmaster Michael Parker also had a change of heart and wrote to parents about meeting with Year 11 students about the issue. His missive offers much for all sides. Or to put it in the current parlance, “How good are Year Elevens?”

Damn these Year Elevens. They come into my office asking me to support the climate strike. They tell me that it is their planet too and that they should be able to protest about what is the most important issue of their lives. They ask whether the school will stand up for them.

I don’t want to catch the political nuclear-grade hot potato that is the climate ‘debate’. I have a strategic plan on education to write and a Council retreat to prepare for. As well, I have always prided myself on being able to teach current affairs without my classes being able to work out which way I would vote in an election. I stay neutral and allow all points of view – sometimes to a fault. And, anyway, I am not a scientist.

But these kids say that they are probably going to live into the 22nd century and they are terrified about tipping points and a runaway greenhouse effect. They say that the climate science is overwhelming. They say that leaders in my generation are not doing anywhere near enough about it.

Heavily I consult my own conscience about climate science. We teach our kids in Year Seven that the scientific method, whilst not irrefutable, is the best thing we have to work out physical truths about the world. We teach them that when there is a consensus amongst almost all reliable scientists, then they are probably right.

To prepare for the meeting with these Year Elevens, I have read the beginning of the 2014 report of the Intergovernmental Panel on Climate Change (the ‘IPCC’ – a pretty reliable group of scientists). Their chief point is that that human-made effects are extremely likely to have been the dominant cause of the observed global warming since the mid-20th century (SPM 1.2, p4).

When they say ‘very likely’ they mean with 95–99% confidence. Even more strikingly, the IPCC say ‘continued emission of greenhouse gases will cause further warming and long-lasting changes in all components of the climate system, increasing the likelihood of severe, pervasive and irreversible impacts for people and ecosystems.’

That’s severe, pervasive and irreversible impacts for the kids sitting in front of me – as well as my own children.I think that accepting the reality of climate science is different to expressing political views. It’s a (pretty settled) opinion about a fact, not an opinion of evaluation. The IPCC may all be wrong in some bizarre mass hallucination or corrupt stitch-up job, but I very much doubt it.

But another climate strike?

I ask what’s going to happen when they want to march about immigration or abortion or any other issue. What’s to stop them marching out for that? They say I am committing a ‘slippery slope fallacy’ (damn those critical thinking lessons we teach them) and that climate change is different in kind to any of these issues because it affects the lives of everyone. Anyway, they say, all these other issues have all been prominent since the last climate change march and there have not been any student marches.

I point out the lessons that students everywhere will be missing – that they all need to be in school to get an education. They say to me that the very vision of Newington is for boys to make an active and positive difference in the world. Going on a march for climate fits the school’s vision better than one more regular day around the classrooms, they tell me. (Damn the school’s vision – I should have seen that one coming).

Why not Saturday? I say. Show your commitment that way. ‘It’s not a strike if it’s on a Saturday’ they say. They get passionate now. They say they have no voice, no vote, that those in power have deserted their generation. They say all that they can do to be heard is to stop doing the thing the government expects them to do that day – going to school.

This isn’t going well. What about ‘slacktivism’ I ask – kids who don’t care and just want to skip out of class. But they are ready for this one too. One of the boys says that he went to the previous march and that everyone he met was committed. Then they say that it is a chicken and egg argument – that going to a march is what will make some kids care passionately and then do more about it. (Damn those critical thinking lessons again). They point out that they have put their own money where their mouth is. They run the school’s sustainability and recycling groups.

I’d rather they went away. I’d rather get back to the school’s strategic plan and the Council retreat. But these kids are passionate, they are smart and they have thought it through. They have put their money where their mouths are and they are scared about their future.

Students who have shown they care about this should be able to march about it. If their parents have allowed them to be absent to go to the strike, then the least we can do is give them the school’s support too.

NOW READ: Some of the biggest names in tech and startups are among 2600 businesses joining today’s climate change strike