The winners of the 2019 Australian Angel Investment Awards 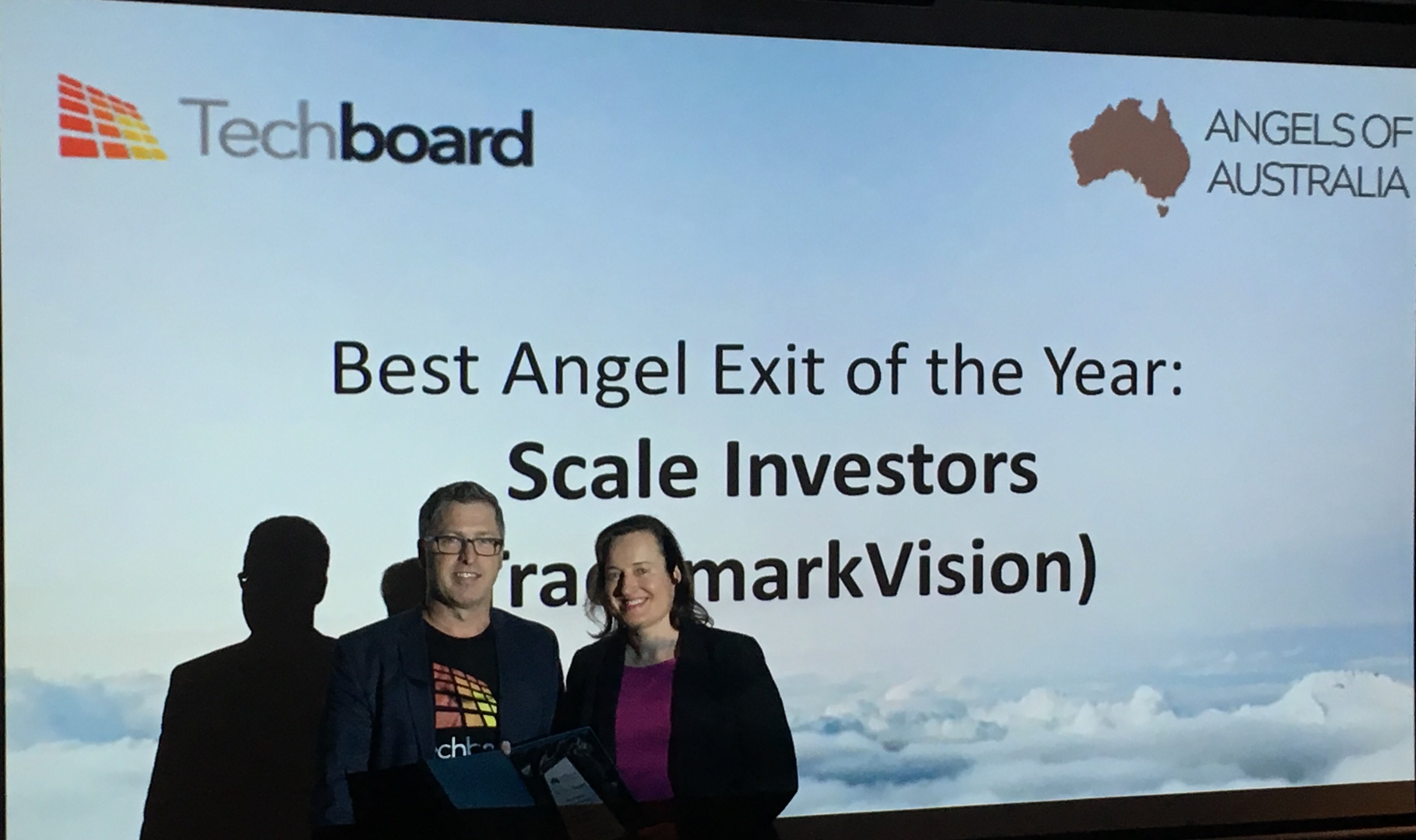 Queensland has become an investment hotspot this year, with the Brisbane taking out the award for most active angel group at the Techboard 2019 Australian Angel Awards.

The Brisbane Angels made 29 qualifying investments into 24 companies in the 2019 financial year – more investments than the next three most active groups combined.

Female-focused Scale Investors were named Best Angel Exit of the Year for their $100,000 investment in Trademark Vision in 2014 returning $2.3m after its acquisition by CompuMark late last year.

This result delivered a cash-on-cash return of more than 20 times for the four angel group members backing the startup, although that figure excludes an additional earn-out payment that likely pushes the multiple closer to 30-times.

Scale founding chair Susan Oliver said that since beginning the angel network in 2013 Scale Investors has invested in 18 businesses  – including second and third rounds.

“The size of that investment is just under $10 million,” she said.

“Our focus is to support woman entrepreneurs in diverse leadership teams – a group that is underrepresented in funding receiving maybe 2% to 2.5% of funding in start-up to VC.

“At any time we have 60 to 80 active angels who back their knowledge, judgement and experience to invest in, support and provide board governance to our investee companies.”

Oliver paid tribute to founder Sandra Mau, who spun out the business, the world’s first visual search for trademarks, in 2013 from the CSIRO venture now known as  Data61, selling to US-based Clarivate Analytics late last year.

“Sandra Mau identified the opportunity for her work in image recognition, applied it disruptively in the trademarking area globally, was funded and supported by Scale Investors and received guidance and strategic support from leading Scale Investor Lauren Melton who served actively as chair of the Trademark Vision board,” Oliver said.

Techboard CEO and co-founder Peter van Bruchem said that result was a significant increase on 2018’s exit of the year by Sydney Angels with the ASX listing of transport booking marketplace Jayride (ASX: JAY).

Australian Angel Awards founder Rafael Kimberley-Bowen said it was “a particular challenge to extract the most worthy nominations from angel investors who sometimes prefer to shun the spotlight” but great to see such success.

“The Best Exit category is one I’m always excited about – as this is really why we invest in the first place,” she said

“People talk about angel investing being about supporting the community and giving back, and that’s all true to a certain extent, but the sought-after exit is really what it’s all about. Celebrating these successes should help boost interest in angel investment as an asset class. A return of 20-times or 30-times over four years is a great advertisement for angel investing.”

Kimberley-Bowen the average angel investment amount this year was just over $125,000 per deal, and was often split across multiple investors in a syndicate.

“So this highlights that good returns can be achieved by angels writing smaller cheques too,” she said.

Angel of the Year went to Jordan Green, president of Melbourne Angels, the man many consider angel investing’s “godfather”, having organised the Australian Association of Angel Investors.

“In the 14 years since I instigated the organised Angel community in Australia we have seen the Angel groups and the independent Angels grow to become the most significant source of capital for startups in Australia,” he said

“Last year my group, Melbourne Angels, was the most active startup investor in the country. About two thirds of all Australian unicorns have been initiated with angel investment.

“The angel groups alone have funded more than 2,000 new high-skilled jobs. It is truly satisfying to see the Angel community continuing to grow and prosper, to know that the future of the economy and Australian competitiveness is being driven fundamentally by the men and women with the confidence and commitment to support our rapid value-growth ventures.

“It is a privilege to be an Angel investor and an honour to receive this award from my peers.”

Fellow Melbourne Angels member Bill Grierson received Most Active Angel Investor for the second year running – he regards it as the Coleman Medal (the AFL’s leading goalscorer award) of investment – saying it’s “pretty cool” to be recognised again even if he’s winding down from 22 investments in 2018 to 13 this year.

“We are particularly happy that all of the 13 qualifying investments this year were follow-ons,” he said

“There is a lot of talk about the lack of angel involvement into second or third rounds and this is something we have been really trying to focus on ourselves – looking away from the ‘glittering new objects’ that are always being placed in front of you in order to concentrate on the real businesses you already have a stake in – and it is also makes portfolio management sense.”

Grierson now has a portfolio of 92 separate investments into 49 different companies in less than five years.

A new award for Most Active Regional Angel Group went to the Fraser Coast Angels, between Noosa and Bundaberg in Queensland, making three deals made during FY19.