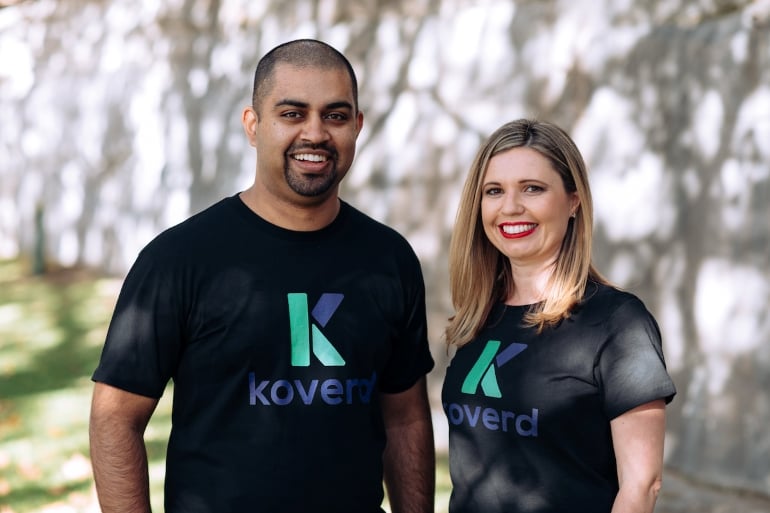 Most adults understand that insurance is a necessary part of life, however, most don’t want to jump through all the hoops that come with finding the right policy.

It was that issue that led Fabrizia Roberto to decide that there had to be a better way.

After a career in marketing for an insurance company, Roberto had the understanding of the industry and founded Koverd, a platform that takes the hard work out of finding the best insurance for you.

“I think we all know that insurance isn’t the most interesting thing to do for people,” she says.

“We know that people struggle to engage because it’s time-consuming, with confusing lingo and a big imbalance of knowledge between the consumer and the insurers.

“There are also some really scary stats about the number of people that actually don’t know what their insurance covers them for. And we see that reflected in the headlines when it comes to big events like bushfires and floods.”

She says, even in the industry, “people say insurance is a grudge purchase, which isn’t right. We wanted to make insurance easier.”

Kovered aims to enable people to cover themselves adequately and simplify the process.

“Our mission is to empower people to elevate their insurance well-being,” says Roberto.

“Critically, insurance wellbeing goes beyond just ticking the box of having bought insurance, it means knowing you’ve got the right level of protection for your individual needs and at the right price.”

Having worked in the industry, Roberto understood that there were issues on both sides of the equation.

“The point of difference for us is that we want to work closely with the insurance industry and bring advantage to them as well,” she says.

“I’ve seen how expensive the cost of acquisition is and how little data is actually available to target the people that you want to have on your books and potentially avoid the others.

“We will be able to better connect insurance buyers and providers and bring benefits to both sides of the equation.”

One of the major focuses of Koverd is getting people excited about insurance – the way they do when buying a new Apple product.

“There are a few options out there, but it’s fair to say that none of those are working for both sides, both the consumers and the insurers. And there are better ways to do it,” she says.

“Our focus will be on an excellent user experience, but importantly it’s going to be powered by relevant insurance data and AI.

“One of the challenges will be to bring our proposition to the consumers in a clear and concise way and make them excited about it.”

Coming from a corporate background, the startup world was completely foreign to Roberto. However, she says building Koverd with Antler helped to ensure she was equipped with the right support.

“I was always in a corporate career so when I decided to jump off and try my hand at starting my own business I really didn’t know where to start from,” she says.

“I used the Antler resources online, as well as the Antler Launch Academy before I decided to apply.

“I was lucky enough to be accepted into the fourth Sydney cohort, and it has been amazing in terms of just having access to workshops and presentations to better understand what’s what in the world of startups.

“It’s really accelerated my understanding of the first few steps and how you’re supposed to do things, which has been really great. And it’s allowed me to find an amazing co-founder in Alok.”

Roberto met Alok Nabi, co-founder and CTO of Koverd, within Antler. The pair realised they made a great team thanks to Nabi’s experience as a technology led in the software engineering space, as well as his time in financial services.

Over the next five years, Robetro and Nabi have high hopes for Koverd.

“We would like for our brand to be a household name,” says Roberto.

“We would like for it to be synonymous with insurance wellbeing for as many people as we can and to bring value to both sides of the industry.

“I know it sounds a little bit idealistic, but I do think a solution that brings value to both the consumers and the insurance industry is what’s needed.

“We all need insurers to thrive and be able to support our society and take away some of the risk we all face. It’s not a matter of us versus them, but of how well we can help and facilitate a better relationship between people and their insurance providers, one that is based on transparency, trust and ease.”