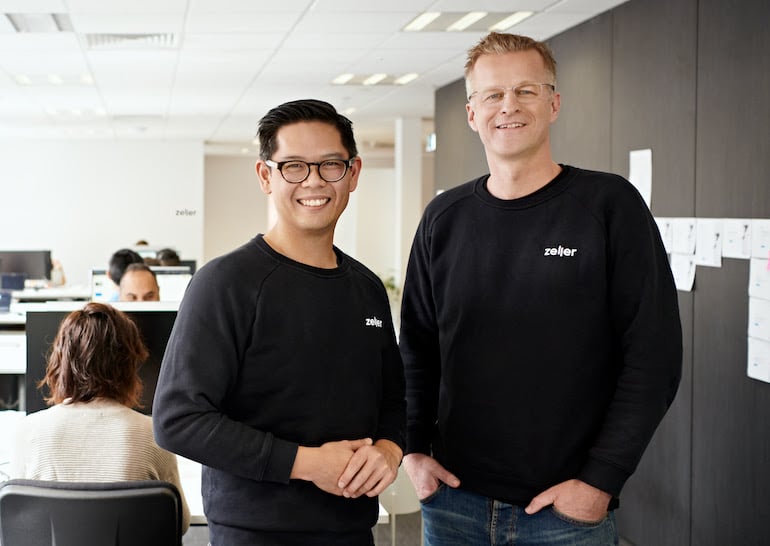 The Melbourne startup has again looked offshore for capital with US VC Headline leading the round supported by local industry super fund Hostplus.

Founded by former Square exec Ben Pfisterer and Dominic Yap, the fintech has now raised $181 million, including a $6.3 million seed round in June 2020.

The venture then announced the first tranche of a $25 million series A 12 months ago, followed by a $50 million top up last June, led by US firm Spark Capital, having launched in May 2021.

By comparison, ASX-listed BNPL Zip has 10 million customers – 1000x more than Zeller – and a current market cap of around $1.1 billion. Cloud accounting platform Xero has a market cap of $15 billion.

The $1b valuation for Zeller just two years after it was founded beats the previous record to hit unicorn status held by Airwallex at just under 4 years.

The funds will be used to launch a range of new payments and business banking capabilities, with the business saying it has signed on 10,000 Australian businesses as customers in eight months, having previously claimed 1,500 joined it its debut month.

Founded by former Square exec Ben Pfisterer and Dominic Yap, Zeller offers local business owners a payments and financial services solution, including an EFTPOS terminal, business transaction account, and Mastercard, in a kit that can be ordered online and purchased at Officeworks.

Pfisterer said they’d listened to the feedback from customers to develop a new suite of products.

“In collaboration with our growing Australian customer base, we hear that they want a single financial services solution that brings together every product they need to run and grow their business,” he said.

Top of the rollout is the ability for merchants to accept payments online with Zeller.

“Yet over 9 million Australians transacted online last financial year, so it’s critical that businesses can accept payments wherever their customers are. Delivering the tools to accept payments and get a complete view of their business, be it instore or online,  is our first step into seamless omnichannel commerce.”

Headline Principal King Goh said Zeller is on its way to redefining how financial connectivity is delivered to Australian businesses.

“Zeller’s remarkable growth over the past eight months is a testament to how they are reimagining the traditional business banking industry,” he said.

“Ben and the team have built strong core products, and we are looking forward to working with them to grow and expand on this foundation.”

Previous article How Tasmania’s digital blackout was fixed, and how to avoid it happening again
Next article Andrew Bragg: Why more cryptocurrency experts need to get a job in Treasury to drive reform
Via Funding
Tags Capital Raisingfintechnews