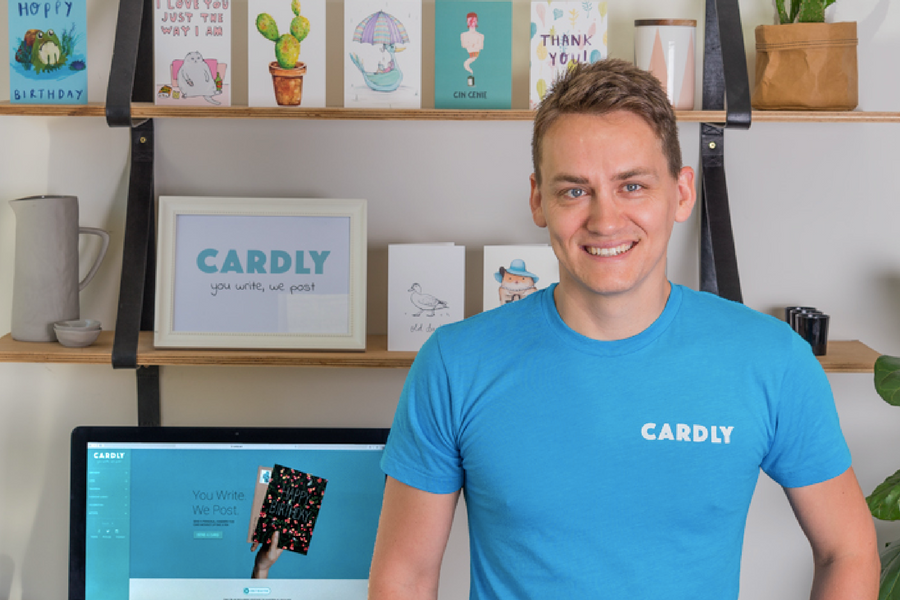 Having last year walked away from a $250,000 deal with Naomi Simson brokered on the set of Shark Tank, Melbourne-founded digital greeting card startup Cardly has raised $230,000 in a seed funding round led by QUT Creative Enterprise Australia (CEA).

The funding comes as the startup looks to invest in artificial intelligence (AI) to further its service, which was founded by Patrick Gaskin and Thomas Clift three years ago.

Offering cards sourced from small artists, the platform works by having a customer choose a card and then type a personalised message; they are also able to create a doodle. The messages are then printed in handwritten styles, with the customer able to choose from a variety to find that which best resembles their own. The file is then sent to a local printer within the global Cardly network to ensure fast delivery.

To further the ability of the startup to personalise cards, Gaskin said Cardly is exploring ways to integrate AI to copy or recreate the handwriting style of the sender.

“We wanted investors who would understand the issues we would face across the digital elements of our business. The creative tech space is not well understood elsewhere and so it was an easy decision to collaborate with CEA,” Gaskin said.

Cardly’s appearance on Shark Tank saw the cofounders negotiate in large part with Simson, who saw an opportunity for the startup’s service to complement the offerings of her own business, Red Balloon, which is focused on the gifting space.

Having made $30,000 in sales to that point, Gaskin and Clift were initially looking for $250,000 in exchange for a seven percent stake from the sharks.

The cofounders were negotiated down to $150,000 in funding in exchange for a 15 percent stake, along with a loan of $100,00 that would convert into an extra five percent stake if Simson could deliver 50,000 customers within six months.

Though the deal was agreed to on the episode, the cofounders decided not to go ahead with it after going through the due diligence process.

Linking up with CEA, however, is an interesting fit given CEA’s focus on the application of technology in the creative industries.

Shelli Trung, manager of CEA’s Startup Fund, said the organisation is looking forward to working with Cardly; in hand with the funding, she will be joining the startup’s board.

“With the world moving more and more towards accumulating mass connections, but feeling less connected, Cardly uses tech in a clever way to provide a little bit of human touch and personalisation. This is where creative tech is at its best,” she said.

“The total greeting card market in the USA, UK, and Australia is estimated to be at $17 billion. CEA’s Startup Fund is committed to investing and growing global creative startups and Cardly is the very definition of this as they are already delivering to happy customers in those markets.”

As it looks to further grow Australia’s creative tech landscape, CEA in December announced the appointment of Alan Jones as entrepreneur in residence for its Collider accelerator program.

In this role, Jones will focus on supporting founders to develop their brand voice, provide direction on how they can create a consistent customer experience, and assist with the practical application of behavioural economics, unit metrics and product marketing.

Speaking to Startup Daily about the role, Jones said at the time that the wider Australian startup community is coming to value creative tech startups.