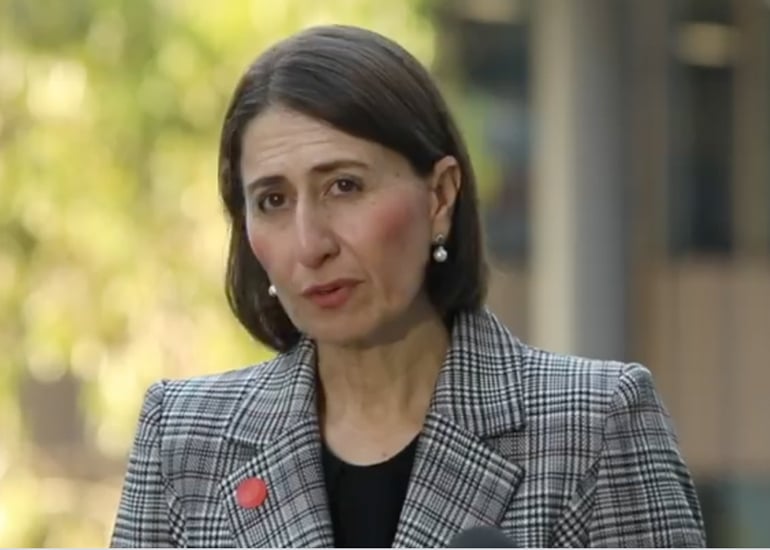 The new restrictions, including wearing a face mask at work, kick in from 4pm today, June 23, for one week.

The Delta strain is believed to be more infectious than previous variants of Covid-19.

Eight of the new cases are linked to a birthday party in West Hoxton, attended by a previously reported case linked to the Bondi cluster. About 30 people attended the party, have all been tested and are in isolation.

NSW Health is currently treating 46 COVID-19 cases, with one in intensive care.

NSW recorded 10 locally acquired cases of COVID-19 in the 24 hours to 8pm last night, seven of which were already announced yesterday morning.

NSW Health has also been notified of 13 new locally acquired cases overnight. These cases will be included in tomorrow's numbers. pic.twitter.com/OFxWSq0ocb

“We’re not going restrict people’s movement or what they do but we will restrict if you live or work in the seven LGAs, don’t go beyond metropolitan Sydney unless utterly essential,” Premier Gladys Beriklian said as Queensland and Victoria closed their borders to visitors from the city’s hotspot areas.

In an ironic twist, Victorian acting premier James Merlino announced the lifting of restrictions in Melbourne just as the Sydney region ramped up its measures.

“We don’t take these steps lightly and we never want to impose restrictions unless we  absolutely have to,” Berejiklian said.

“We know the effect this will have on residents and venues but we must take this action now to ensure we keep on top of this outbreak.”

“We’re continuing to urge people to come forward for testing, especially if you were in  Westfield Bondi Junction (including the car park) at any time between 12 June and 18  June,” she said.

Even before the NSW premier announced the new measures, the Queensland and Victorian governments acted to close the border to residents of the seven Sydney council areas – City of Sydney, Waverley, Randwick, Canada Bay, Inner West, Bayside, and Woollahra.

From 1am on Thursday, Queenslanders returning home from those areas face a mandatory 14 days of hotel quarantine. Any residents from the Sydney LGAs cannot enter Queensland without an exemption permit.

“We know this Delta variant is much more infectious than other variants and we have serious concerns. So to keep Queenslanders safe, we will be following exactly what Victoria has announced last night,” Premier Annastacia Palaszczuk said.

Queensland currently as 35 active cases, but had no new locally acquired cases overnight.

Overnight Victoria upgraded the Sydney regions from an orange zone to red, blocking anyone from those areas from entering the state from 1am last night.

Victorian residents who’ve been in a red zone (other than in transit) can get a permit to re-enter the state but must quarantine at home for 14 days.

“If you try to enter Victoria at a land border from a red zone without a permit, you will be sent back,” a Victorian health department statement announcing the border closures said.

“If you enter at an airport or seaport from a red zone without a permit, you will be fined and will stay in hotel quarantine until return transport is arranged.”

Local government areas north of the Sydney Habour Bridge remain in the green zone but anyone travelling to Victoria from those areas still need to apply for an online permits.

Meanwhile,  restrictions in regional Victoria and metropolitan Melbourne will ease from midnight on Thursday, June 24.

Private visitors to the home will increase from two in Melbourne, and five in regional Victoria to 15 across the entire state – and up to 50 people can gather outside in a public place like a park.

Funerals and weddings will be capped at 300 people, and hospitality venues can serve up to 300 in Melbourne, but density limits still apply.

Masks must still be worn inside. But more people in metropolitan Melbourne can return to offices, with 75% capacity – or 30 people in a workplace – whichever is greater.

Players, parents and spectators can attend outdoor community sport within the total cap of 1,000 people.

Live music will have greater numbers in pubs, clubs and other hospitality venues across the state too, but dance floors are still closed for now.

Theatres will initially open at 50% capacity, with up to 1,000 people. This weekend crowds can attend public events and outdoor stadiums with a limit of 50%, or up to 25,000 people.

But, subject to the advice of the Chief Health Officer, from July 1, they’ll be able to host even bigger numbers:

For the next week, the government is recommending that those travelling to Victoria’s alpine region get tested prior departing metropolitan Melbourne, especially if they’re staying overnight.