‘WE ARE THE VERB’: Afterpay’s sales and customers double, but it still posts a loss 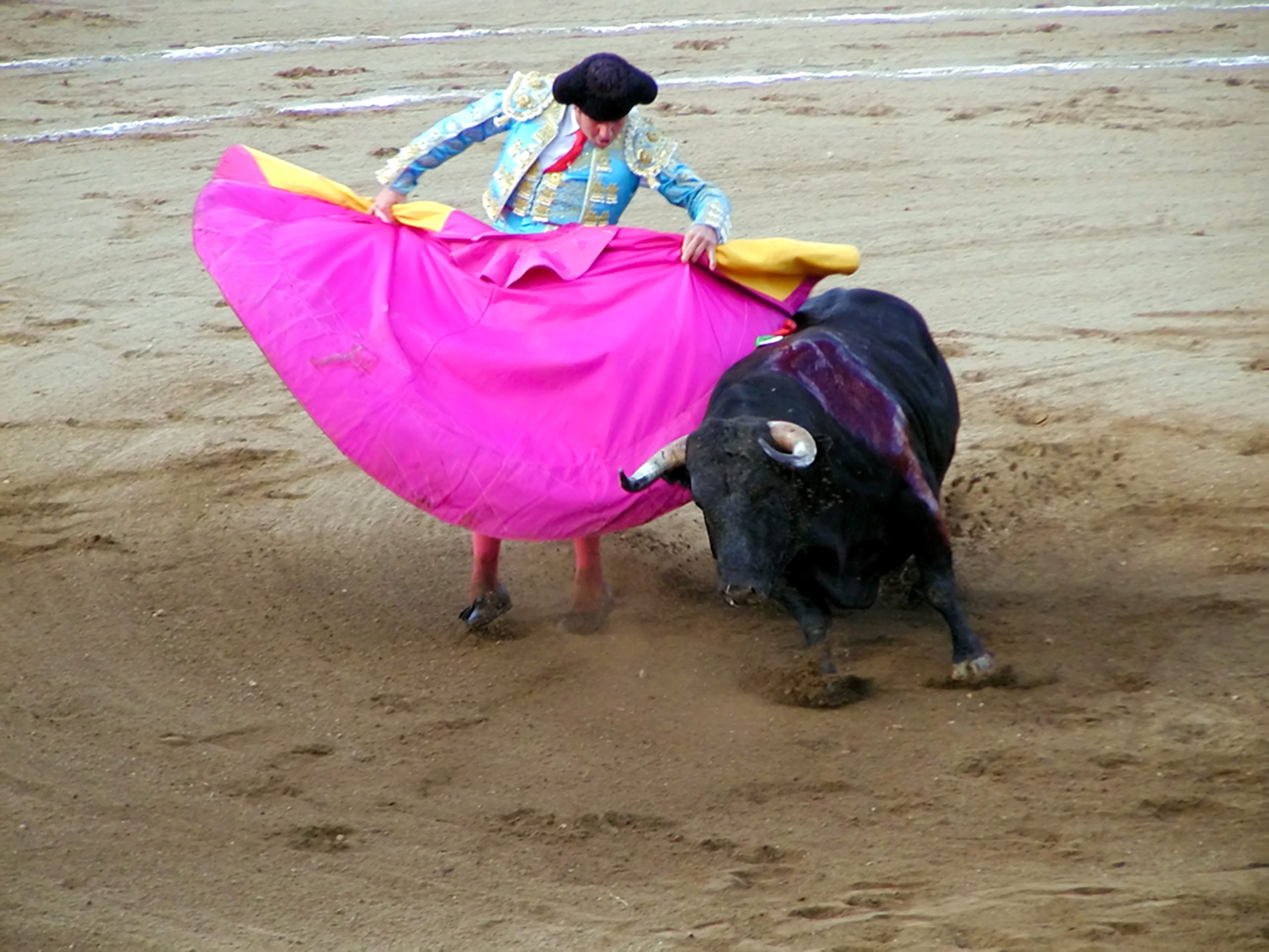 Afterpay’s growth continues at an astonishing rate, with the buy-now-pay-later fintech adding 20,500 new customers a day in the fourth quarter of the 2020 financial year.

Releasing its annual results today, the ASX-listed star performer, which has seen its share price rise 1000% in five months, declared “It’s not pay in four, or BNPL, it’s Afterpay. We are the verb and our own category” in its investor presentation.

The results were as expected the company revealing headline numbers last week. 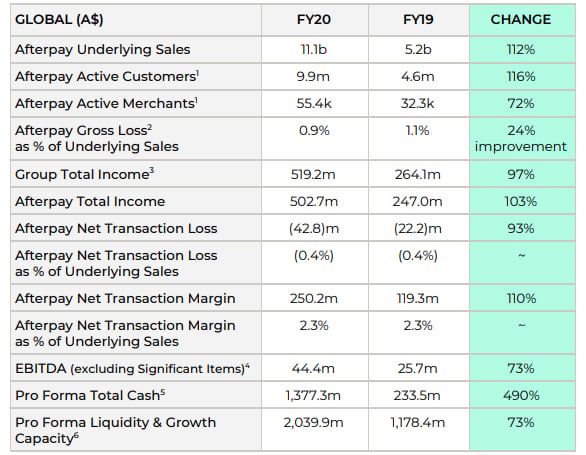 Customer numbers in the US hit 5.6 million and in the UK, 1 million.

Earnings before interest, tax, depreciation and amortisation (EBITDA) rose 73% to $44.4 million from $25.7m. The statutory net transaction loss was $42.8 million compared to a loss of $22.2 million the previous year.

“Gross loss improved notwithstanding the impact of the COVID-19 pandemic and increased underlying sales contribution from the newer US and UK markets, which have higher losses relative to ANZ, due to their earlier growth phase,” Afterpay said.

The growth of the US and UK markets has seen the contribution from international markets rise to 41% from FY19’s 18%.

Underlying sales in Australia and New Zealand rose 52% to $6.6 billion.

Afterpay announced Asian expansion plans following the “small acquisition” of EmpatKali, a Singapore-based company operating in Indonesia, with a small in-region team to be established.

The company is also “exploring opportunities to leverage Tencent’s network and relationships to expand into new regions in Asia”. Tencent took a 5% stake in Afterpay in May.

Updating its regulatory challenges, After said it continues to cooperate fully with AUSTRAC as it considers the Independent Auditor’s Report into money laundering breaches investigated last year.

Afterpay said feedback from public consultation on the BNPL Code of Practice is being considered by the industry working group, and engagement with ASIC on the Code is continuing.

The company also cooperated with ASIC in a follow-up review of the BNPL industry and expects a public report from ASIC in September 2020. 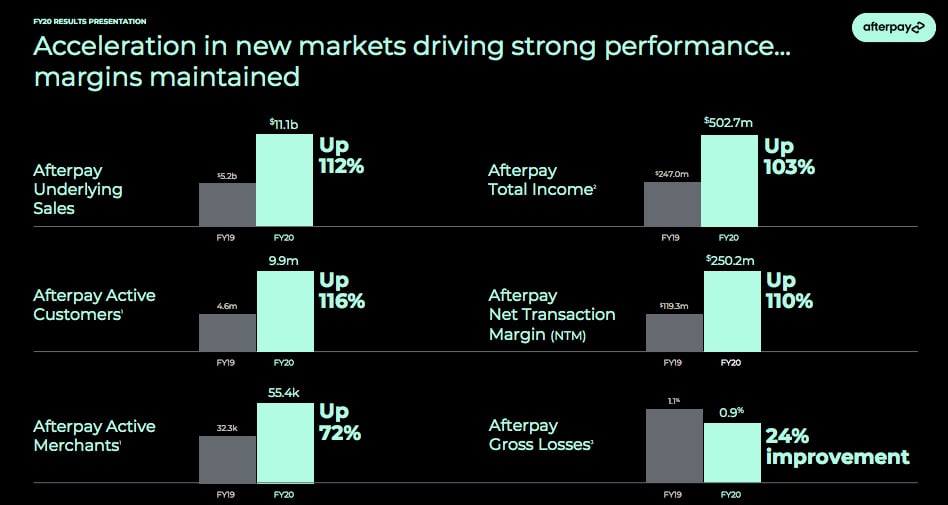 The company’s share price has been on a tear since plunging below $9 on March 23 as uncertainty about the impact of Covid-19 hit markets. Last night it finished down slightly at $90.72 at Wednesday’s close, having hit yet fresh record of $92.48 on Tuesday.

Afterpay floated in June 2017 at $2.95 a share. It’s made co-founders Nick Molnar and Anthony Eisen billionaires. The business now has a market cap of around $25 billion – roughly the same as Coles, putting it in the top 20 ASX companies. 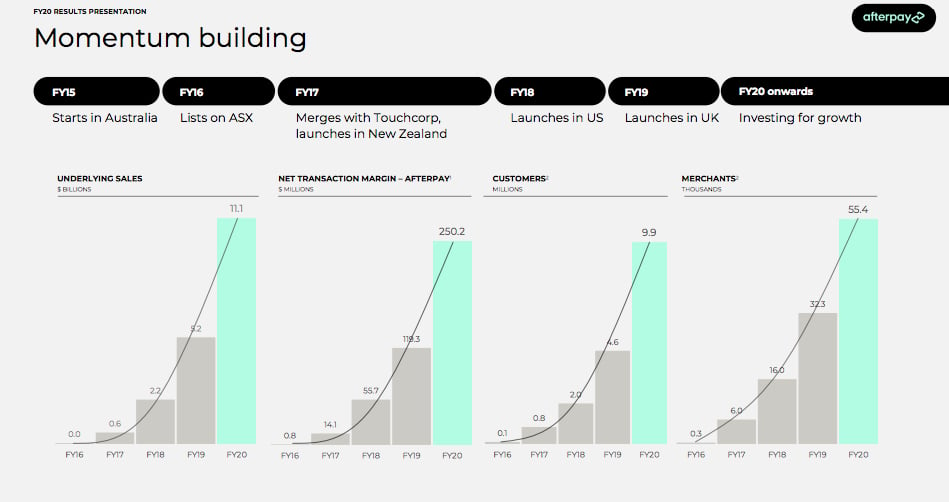