Moovosity, a tech startup focused on physical education and movement software for children, is hoping to launch in schools across Australia after scoring $300,000 in seed funding from CMO Software founder James Cotton’s VC fund Uluwatu Capital.

Cotton is a co-founder in the Brisbane-based, Moovosity, alongside Scott Jenson and Mal Mizen. The trio set up Moovosity last year with an aim to change the way kids learn to move using science, hoping it will improve their health, wellbeing and academic performance.

The cash injection will be used to develop the tech and expand the program Australia-wide in primary and secondary schools. 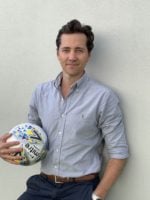 Brisbane, Sydney and Melbourne are the initial goals with CEO Scott Jenson also hoping to expand into Asia, UK and the US.

“We have an amazing opportunity to address the lack of movement in this country. It is remarkable that fundamental movement skills have declined by 30% in Australia since the 1980s,” he said

“A root cause of childhood inactivity is the significant decline in movement skills such as running, jumping, throwing and catching compared to previous generations. These skills are critical for all children to move with confidence and a sense of enjoyment, which is what Moovosity is focussed on”.

In Australia, a quarter of children aged between 2 and 17 are overweight or obese. The estimated annual economic cost of overweight pre-school children is put at $17 million,and Jenson said the fact that only 27% of primary schools have a specialist PE teacher is proof of a significant capability gap in education.

Moovosity has partnered with the University of Queensland’s pedagogy experts to create movement programs, teaching resources and curriculum mapping. QUT is researching the outcomes of the Moovosity program to measure physical activity levels, competency improvements and how engaged students are in physical activity.

Co-founder James Cotton said he wanted to use his VC firm Uluwatu Capital to back Moovosity because it has the potential to address the health problems associated with children are moving less than ever before.

“We have the chance to help children improve their quality of life, health and well being, and that’s way too exciting to not put in a higher gear. So we have decided to invest and accelerate the development and growth of Moovosity,” he said.