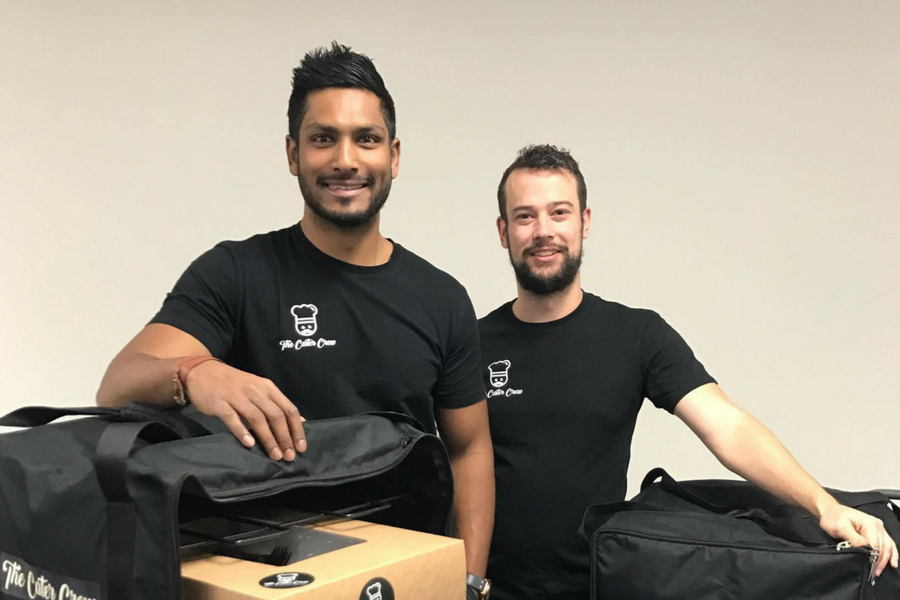 For university friends Rizvi Mridha, Steve Hutchinson, Marko Siljanovski, and Afnan Hannan, there wasn’t much consideration of either result when they set out; the decision to start a company together was a simple one, with the idea for Bindle having come from their shared experiences and needs.

The quartet would save up as much as they could each year at university for a three month trip over the summer break. Doing so much travelling every year, Mridha said they grew frustrated with certain aspects of it all.

“Often, you would spend so much time and money to get there and have a hit or miss experience, and it wasn’t so much about the place itself, it was more about not knowing what may have been happening at the time, and then months later hearing about something that had been happening only 10 minutes down the road,” he explained.

“A lot of the sites we were using to find information were quite static, and there’s only so much you can get from Lonely Planet.”

Another key frustration was how difficult it could be to meet new people; after all, one of the great joys of travelling is all the people you meet by coincidence.

Considering these twin frustrations, the four embarked on the journey to build and launch Bindle, a mobile app that would help travellers get to know their surroundings to give them up to date information on what to do and events happening around town, and then connect with other travellers they could complete those activities with.

You would be hard pressed to find a young traveller who wouldn’t have some use for such an app, but as Mridha explained, Bindle quickly ran into a problem many a startup trying to build a two-sided marketplace has faced, the old chicken-or-the-egg conundrum of whether to first focus on building up the supply or demand side.

The goal for Bindle was to bring on users, who would then generate organic content; to get those users on in the first place, Bindle needed suppliers to create content. With this proving difficult, Mridha explained the cofounders decided to pivot slightly, expanding their focus beyond travel to the wider ‘experiences’ space.

“We thought this would make it easier for suppliers to actually give us content, whether that was about food, a night market, some sort of exhibition or even a landmark; if we were able to get that content, the theory was that we’d be able to spruik organic content,” he said.

As it turned out, the pivot could only paper over the cracks in the founding team for so long.

“In hindsight, I don’t think we did anything wrong in terms of the tech; we actually had a pretty solid app, I’m not going to lie, I think we built something that was actually really good. It worked exactly how we wanted, in terms of bugs we’d pretty much gotten rid of everything, and in terms of content we actually did have quite a bit of content. We could’ve done things better, but in terms of an MVP getting it out there to get it tested, we ticked all the boxes,” Mridha said.

The journey to launching that MVP had taken 18 months, however; over that period of time, Mridha said, the cofounders realised they weren’t all on the same page about what they wanted.

“By the time we actually got the app out, I think certain members of the team may have run out of drive or steam, and we just had different priorities in life. I don’t think that’s a bad thing, that’s just life,” he admitted.

The issue of funding played a role here. Mridha still believes Bindle could have had legs to go on if the cofounders had been working on it full time; as it was, the four of them were all working other jobs and building Bindle on the side.

“That’s okay to get an MVP up and running, but it’s different when you come to the point where you have to make the decision about whether to put more into it. Every startup is different, but if there’s a struggle when comes to funding, and you have to decide to go full time, you need to start looking at your own finances personally, and the more cofounders you have the more important it is to be on the same page about the resources you’re going to dedicate to something,” he explained.

In the end, the four cofounders weren’t able to come to an agreement about how to push forward with Bindle, with one making the decision to leave.

The need to determine each team member’s appetite for risk and their end goal is perhaps the biggest lesson Mridha too from the experience.

“We thought we had very open and honest communication, but sometimes you inadvertently steer away from the tough conversations…it’s important to actually put things on the table and discuss things. If you asked me for the number one reason why Bindle failed – and I’m not going to say it failed, because we learned a lot from it – but let’s say what we wanted to achieve failed, I’d say it was a breakdown in communication among the cofounders.”

The three remaining cofounders kept on for another six weeks or so, even pivoting to ‘Foodie’, a sort of location-based Instagram for food, before making the final decision to end it.

“It sucked, it did really suck,” Mridha said. “There’s two ways to deal with that, though. One is, you sit there and you go, ‘shit, this really sucks, I just flushed 18 months of my life down the drain’, or you sit there and ask, ‘that really sucks but what did I learn from it, and what flow-on will that have going forward?’”

The team took the second approach, finally having an open conversation.

“It was bittersweet. It was good because at the end of the day, if the motivation’s not there, it’s the right decision, but it was a shitty at the same time because we did all appreciate that we all believed the idea did had legs to go the extra mile.”

The tough conversations that revealed the cofounders weren’t on the same page and hadn’t been for some time formed the basis of Mridha’s other key personal learning from the Bindle experience: four cofounders is too many.

“The problem that large organisations face is that there are too many chefs trying to make decisions. As a startup you want to eliminate as many hurdles as possible, so I think it’s better to have fewer cofounders to start with, because then it’s easier to have conversations and be open about things, and come to an agreement on things because you don’t have all these different views,” Mridha said.

After around a year back working a ‘normal’ job, Mridha last year teamed up once more with Hutchinson to develop a new business, The Cater Crew. Another marketplace startup, The Cater Crew partners with professional caterers, restaurants, food trucks, and independent chefs and connects them to corporate clients across Sydney.

Going in, Mridha and Hutchinson put into practice the two key lessons learned from Bindle: two cofounders, and have the important conversations early.

With Hutchinson a software engineer, Mridha said they decided it would be possible for him to work on The Cater Crew two and a half days a week, but for Mridha as the “hustle founder” or operations founder, he said, needing to communicate with a client base and target market between the hours of 9 to 5, he needed to be all in.

“After Bindle, in the back of my mind I promised myself I’d never do something half arsed…the decision was already made in my mind that if I was going to do something, I’d do it full time,” Mridha said.

Mridha had also promised himself after Bindle that he would never again waste time on trying to raise funding without having first built something solid.

“I said I was not going to, for anything I did in the future, just try to sell an idea to an investor. I made a promise to myself that I was going to get runs on the board and then approach investors. Steve and I said this whole year would be about getting revenue, getting traction, proving to ourselves as founders that this is something worth pursuing, and then we’ll go try to get some substantial investment,” he said.

The Cater Crew now has upwards of 50 corporate clients in Sydney. The process of getting them on board and servicing them has given the team a better understanding of how the business works, from its strategy to finances, which Mridha believes will make putting a pitch deck together and approaching investors easier.

Traditionally, the corporate catering market has been dominated by professional caterers – those with no shopfront, servicing solely catering clients – with restaurants finding it difficult to get a foot in. For clients, of course, this means limited choice.

Despite playing in a crowded marketplace, with the likes of Deliveroo, UberEats, and Menulog all also vying for restaurants to join their platforms, Mridha said The Cater Crew’s proposition to restaurants is unique.

“Because we’re business-to-business, the average order is at least 10 times a Deliveroo order. On top of that, with us restaurants get 48 hours’ notice about an order, so it’s much easier for them to plan for that. Our average order’s around $400 to $450, and for a restaurant to be able to pump out that much without filling up seats is a big value add for them,” he explained.

Since launching into the market in February, the business has done close to $200,000 in sales.

“I think the word ‘startup’ gets overused, and we just need to get back to basics – yes we talk about scale, yes we talk about high-growth startups and gazelles and whatever else, but at the end of the day, business is business, and business means getting numbers through the door, it means all those things that people have been doing for centuries,” Mridha said.

“If you can’t get that right you’re not going to be successful.”

The Cater Crew will be looking to launch into Melbourne and Brisbane over the next few months, with Mridha’s goal for the next year to enter the UK.