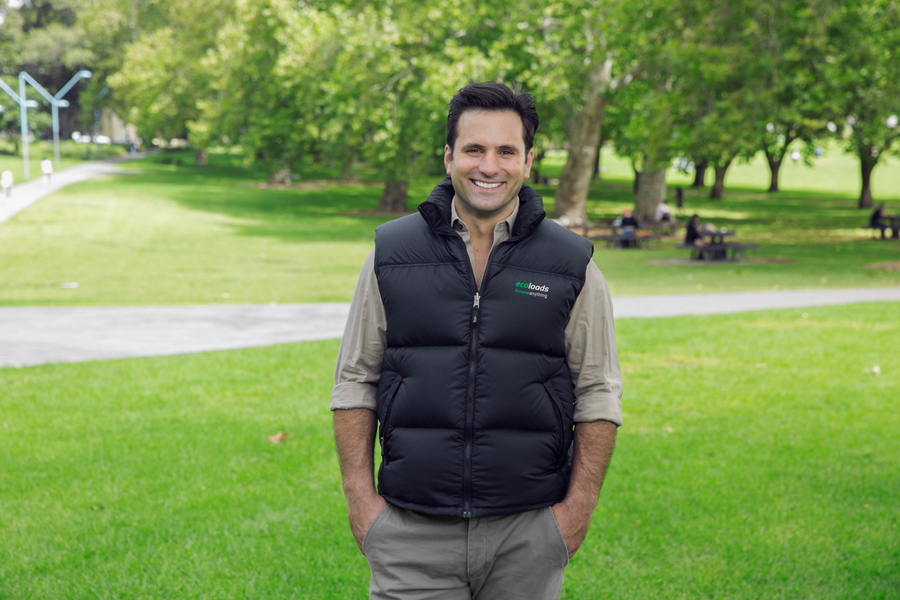 Whether it’s moving your fridge or office equipment from one end of town to the other or sending a car across Australia, transporting items can be expensive – and not so great for the environment.

Hoping to solve both these problems is Sydney startup ecoloads, a marketplace connecting customers with independent truck drivers and small trucking businesses. Beyond simplicity, the focus of ecoloads, as the name might suggest, is on providing environmentally-minded access to transportation services, as founder Jordan Panos put it.

As well as pledging $1 to Greenfleet, a not-for-profit helping people offset carbon emissions through the planting off trees in biodiverse forests, from every job fulfilled through the platform, the startup in particular wants to help transporters fill up their trucks to make the most of a route they may have already been taking, taking another vehicle and its emissions off the road.

The idea evolved out of the founder’s experience in a previous business, when he at one point had to send a pallet of toilet paper to the Northern Territory.

“I couldn’t find a transporter to do it for less than $1,000, and wanted to keep cost of transport below the cost of goods. I thought, surely someone was driving back from Sydney to the Northern Territory and could do it for a quarter of the price,” Panos said.

Doing more research, Panos realised the problem is widespread (and looking to solve it on a larger scale for businesses as big as food and beverage company Lion is Sydney startup FreightExchange, which also aims to reduce waste in the freight industry by connecting freight carriers with extra capacity on a particular leg to those needing something shipped).

“On a daily basis, thousands of trucks are delivering items both locally and across country and returning back empty. Ecoloads is committed to encouraging backloading to reduce environmental impact, and to create safer roads by minimising the amount of vehicles using Australia’s road network,” he said.

Having validated the idea, Panos brought a team together and began work on the ecoloads platform, aided in part by a startup grant from Jobs for NSW received last year. Though his vision for the platform was clear, Panos faced a problem many founders do when starting out and bringing on a team.

“I’m a firm believer people are a company’s most important assets, and while I am privileged to have my key design and developer on board to this day, another developer was trusted more than they should have been,” Panos admitted.

“This discovery felt like we had descended to base camp, and delayed our launch by a year. It was largely overcome by letting go of the disbelief, ‘acclimatising’, and committing to the ascent again.”

The current iteration of the platform – or the summit, if you will – works by having a customer post a job, describing what goods need transporting, when, and where. Transporters, in turn, can bid for the job, with their quotes sent to the customer’s inbox directly and the customer then able to select the appropriate transporter.

Like every other platform of its ilk, transporters can create a free profile on which they are able to detail information about their service and display reviews. They can also choose to be alerted to relevant jobs in their nominated geographical area, while the platform allows transporters and customers to message each other to sort out details about a job.

In terms of transporters, the platform is targeting independent truck drivers and the small to medium trucking businesses with up to 10 trucks, a group Panos termed “the heart and soul of Australia’s transport sector”.

According to Panos, 5,000 transporters signed on ahead of ecoloads’ launch, with the startup having targeted them through job boards and its own ads calling for interested transporters.

Panos is assured that ecoloads “serves the Australian public’s best interest” and thus in turn getting the other side of the marketplace on board “is not a hard sell”.

“We save you money, save you time, you choose your trusted transporter, and we give back to the environment on your behalf. The market is invested and supportive of ecoloads as it offers a win/win scenario for both customer and transporter. No matter what the vertical, ecoloads connects you with the driver who has the means to deliver,” he said.

The platform takes a cut of 18.5 percent from the transaction fee for any job, with $1 from this donated to Greenfleet.

“It is critical to be socially responsible, so environmentally minded delivery services were a no brainer. The ecoloads and Greenfleet partnership stems from driving Australia toward a low carbon economy and into a – hopefully – energy-focused revolution,” Panos said.

Panos acknowledged ecoloads’ competitors, as well as the fact that transporters and customers meeting through jobs could always come back to each other for further work and cut out ecoloads as the middleman, however he believes the platform’s interface and the service’s sustainability focus provide an attractive proposition.

With this in mind, Panos has a simple goal for ecoloads as it pushes to grow: “To move anything Australia-wide, and ensure each customer and transporter has an enjoyable experience.”