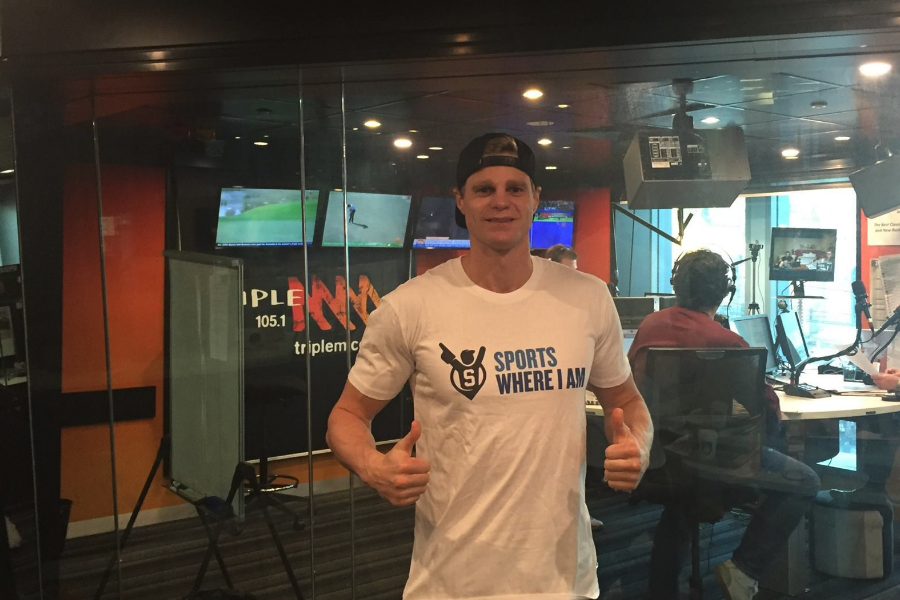 While Optus streaming the English Premier League may make it easy to get to know the rosters of far-flung soccer teams inside and out, actually catching a game when you head overseas can be difficult: the process of finding and buying tickets, getting to and from the stadium, and finding a place to hang out with local fans before or after a game isn’t as easy as it seems when you don’t know a city.

In to help solve this problem and capitalise on the growth of the sports travel market is Australian startup Sports Where I Am, which has created an online community for sports fans, by sports fans.

Aimed at the travelling fan, it allows them to find games, buy tickets and merchandise, and get the best advice from locals on all kinds of game day activities, from the best bars to visit before and after a game, where to park, the best seats and food options at the stadium, and more.

Founded in 2012, the idea came to cofounders Adrian Gale and Matt Scully while on a trip to New York City. Being big sports fans, they wanted to check out a couple of games that were on during their stay but get the local experience, finding the best deal, rather than the tourist one.

“This process proved surprisingly difficult and frustrating for us. We wasted a lot of time searching through schedules, league websites and forums for ticket sites we didn’t trust, and looking for local advice that was often not available or not authentic,” Scully explained.

The frustration turned into motivation to bridge the gap in the market, and Sports Where I Am was born.

The platform, available both online and as an Android and iOS app, works by having a user log on and search the city they are going to, after which they will be shown a list of all available games in that city. Narrowing these down by filters like date and sport, they can then find the specific game they’re looking for.

On the community side, users are able to find advice from other sports fans about how to make the most of their time before, during, and after the game. Following the game, the user too can help fans in the future by detailing their own experience and providing any tips.

Where the startup differs from other sports-focused forums or social networks is its partnerships with ticketing and merchandising platforms, allowing users to be connected to tickets and fan gear.

Scully said the various features on the platform are a result of “rigorous team debates” and consumer feedback, through the early decisions were often made by reflecting back on the initial trip Scully and Gale took to New York and asking whether a proposed feature would have helped them on that trip.

“Existing services do a fantastic job of offering one part of the solution to the user; we pride ourselves on being a comprehensive global sporting experience company that provides all of the elements you need to make your game an event to remember,” Scully explained.

“When you recall some of your favourite sporting experiences, you remember much more than just the final score. It’s about the pre game rituals, the crowd interactions, the food, the journey to and from the game, and the unique local customs. These all play a part in turning your game into an event.”

To build out the platform, Gale and Scully brought on Jordan Digby as their tech cofounder. Former CTO of Viator, acquired by TripAdvisor for $200 million in 2014, Digby has built systems for the likes of Qantas and British Airways. A large part of his work with Sports Where I Am has focused on writing routines and analysers that standardise data from multiple sports, teams, geographies, and seasons to help make information as easily accessible to fans as possible.

The startup has reached these users in part through bringing on AFL player Nick Riewoldt as an ambassador. With his wife Catherine’s family located in Houston, Riewoldt regularly visits the US in the offseason and takes in as many games across different sports as he can.

Having faced the problem Sports Where I Am is trying to solve himself, Riewoldt has worked with the startup over 18 months, helping them further develop the platform before coming on as an ambassador.

“Nick has had a profound impact in a short space of time and has helped generate significant awareness among our target market,” Scully said.

The startup has brought on around 30,000 new users since Riewoldt began PR activities in August, with the majority of these coming from Australia. So far, the heaviest users are aged between 24 and 35 years old with, surprise surprise, an interest in sport and travel.

Showcasing listings for cities across Australia, the US, and England so far, the market for Sports Where I Am is significant. While international travellers are a clear target, domestic travellers are not to be ignored: in the US alone more than 30 million domestic trips are made each year for the sole purpose of attending a sports event.

Having bootstrapped the initial development of the platform, Gale and Scully later received seed funding, and most recently a federal grant through the government’s Entrepreneurs Programme that has allowed the startups to expand its listings beyond the US.

The most significant development made possible through the grant however is the Sports Where I Am partner software platform, Scully said, allowing partners the ability to offer their own users access to the startup’s package.

Looking to 2017, the startup is focused on continuing to expand its reach globally.

Image: Nick Riewoldt. Source: Sports Where I Am.