The rise and rise of the Australian podcasting community 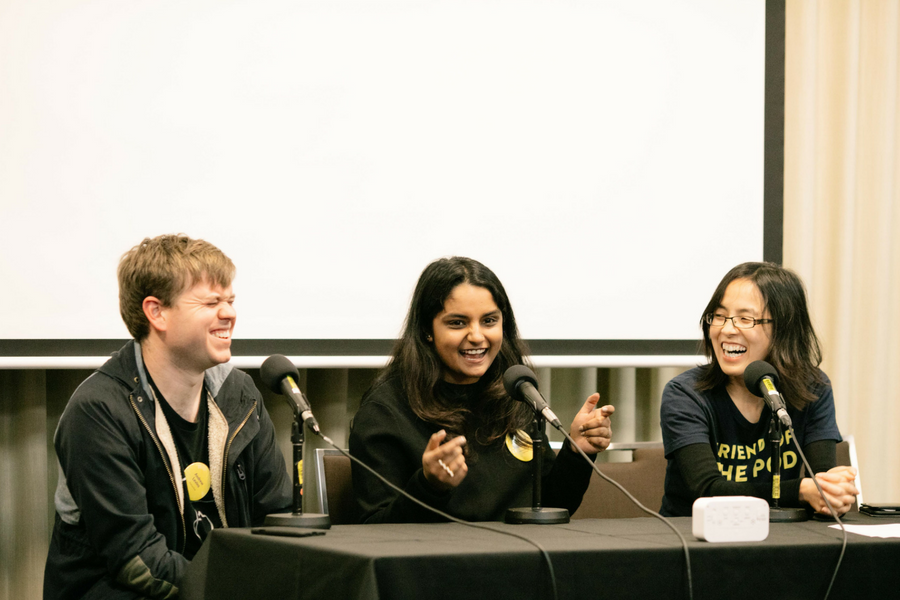 Serial, the podcast exploring the 1999 murder of Hae Min Lee and whether her ex-boyfriend Adnan Syed, who was convicted of her murder, in fact committed the crime, was a global hit in 2014, spawning breathless internet recaps, memes about Best Buy, and this past March a retrial for Syed.

Podcasting was by no means new in 2014 but for many listeners Serial was their first introduction to the medium; the podcast in 2015 won a Peabody Award, recognising that it helped take podcasting into the mainstream.

The medium has grown in leaps and bounds over the last few years – Scrubs star Zach Braff is now even starring in a sitcom, Alex Inc, based on a podcast called Startup, which follows a radio producer called Alex Blumberg starting a podcasting company called Gimlet.

Australia too is boosting its podcast production, with the ABC launching a $1 million fund to help uncover and produce new podcasts and tech companies like Acast helping producers reach audiences and advertisers.

For Henrik Isaksson, country manager for Acast in Australia, the growth of not only the local podcasting space, but streaming in general, has been interesting to watch.

A Swede, Isaksson first came to Australia in 2012 as part of the launch team for Spotify in Australia and New Zealand.

“Back then, the conversations we were having with music labels, collecting societies, and also podcasting systems were not about streaming, they were all about about downloading. The concept of streaming stuff didn’t exist at all,” he said.

Like many a startup looking to pitch a new technology or way of doing things, Isaksson admitted it wasn’t always easy to get others to see the light.

“Over the last eight years at least, I’ve been working for businesses who have been punching above their weight, the up and coming disruptors, you might like to call them, so it was always was very tough. I remember going into negotiations with brands and agencies and publishers and being quite nervous, which is not the case anymore at all,” he said.

“When we go in into conversations these days it’s a very different mindset. I think Australia was really ready for change.”

After a stint at Amobee after leaving Spotify, Isaksson took on the country manager role at Acast last August, tasked with growing the service into Australia.

As Isaksson explained it, Acast, another Swedish company, is creating a global podcast ecosystem with a simple goal: “What we’ve set out to do is bring money back to the industry, the content creators and publishers, by connecting them to brands and agencies through technology, so they can continue creating content and expanding their universe.”

Isaksson had to pitch for the Acast job and explain why Australia was a solid expansion market. The facts, he said, were clear to see.

“If you look at the radio landscape in Australia, which is very healthy, actually, the big three publishers will turn over somewhere north of $750 million this year, and with podcasting they add another $250 million. That’s a billion dollar market, before you then also add the fact that services like Spotify have also been successful here,” he said.

The podcast space is booming, Isaksson said, because podcasting is “almost like the last frontier” and brands and agencies are keen to get involved.

“I see it like what video was like almost 10 years ago; there’s not enough premium content to go around through which they can actually communicate with audiences,” he said.

The company works with both creators and advertisers to understand what they want and how to best connect them, with Acast keen to work with both prolific producers and first time podcasters alike. Acast recently signed on the satirical website The Betoota Advocate, for example, having convinced the founders to start a podcast.

The business case for Acast, and the brands and agencies they work with, is clear, but the other key drawcard is the storytelling itself.

“There are so many good stories in Australia that still need to be told,” Isaksson said.

Helping to tell these stories is Kate Montague, an audio producer and founder and director of Audiocraft, an audio content agency and the organisation behind the annual Audiocraft Festival, a three day event dedicated to podcasting.

“I come from a film and TV background, but once I got into audio I became the biggest diehard there is,” Montague said.

“I think it was the immediacy and intimacy of audio that excited me the most, and the versatility from storyteller’s perspective of what you can do with audio in creating a one to one connection with a person and their story, or peering in on a conversation between two people in a really intimate way. It’s quite exciting and powerful as a storytelling tool.”

The drive to create Audiocraft, a vehicle through which to support the burgeoning podcasting landscape locally, came a few years ago, as Montague began to notice a shift away from traditional radio, seeing that she and her friends, were increasingly listening to podcasts coming from overseas.

“I just saw this saturation of really quality content that was coming from overseas, but not as much amalgamation of local content,” she said.

“I think, you know, as much as everyone’s podcast feed will be loaded up with international podcasts from overseas and predominantly American content, I think that, still, we have a real yearning for local stories and local voices. Australians want to hear themselves in their content.”

The space has grown drastically since Audiocraft launched two years ago, Montague said: companies like Podcast One, Acast, and Audible have set up down under, partnering with local producers to explore the production of local content.

“I think that’s going to be the tipping point for Australian podcasting, when we have a body of work that is more reflective of our own stories, and our own content.”

“A conversation can go as long or as short as it needs to be – though that’s a power that needs to be used wisely,” Montague said.

“The editorial skills that come from radio are still really important, but what you have is a more flexible format, and there’s an excitement in the air about the democratic nature of podcasting. Anyone can make a podcast, the tools are more accessible, and there’s a sense of freedom and experimentation for makers getting into podcasting.”

Audiocraft is next month running the Audiocraft Podcast Festival, running in Sydney as part of Vivid Ideas.

Bringing together producers from around the world, the festival will run talks and workshops covering everything from the art of a good interview to editing basics and how to pitch your idea. Audiocraft has also partnered with Audible to run a content development retreat, aimed at helping develop the next big thing in audio content.

With the Australian podcasting charts dominated by international content and local shows that are either podcast catch ups of a radio broadcast or conversational shows, Montague is hoping this year’s festival can help more Australian creators explore different ways to tell a story.

“The challenge is, how can we make more interesting sounding audio, and that’s what we want to foster, raising the bar in terms of production quality and having a bit more fun with the medium,” Montague said.

There is a question here, Montague said, around the Australian sound and what that is – as well as who is included when we try to talk about and define the ‘Australian sound’, and who isn’t – and why we have sometimes been shy about sharing it with the world, and it is a question Audiocraft will look to explore with a session at the festival.

“If I think about what distinguishes our voice and stories, personally, I think of the unique sound of our environment, like the birds, and the texture and diversity of our accents and voices, which are unique to us, and a kind of irreverence, too,” Montague said.

“I think we want to hear those unique and slightly odd stories.”

Keen to make a podcast or level up your game? Learn from the best at the Audiocraft Podcast Festival – use the promo code STARTUP for a 10% discount on the Conference pass (General Admission)