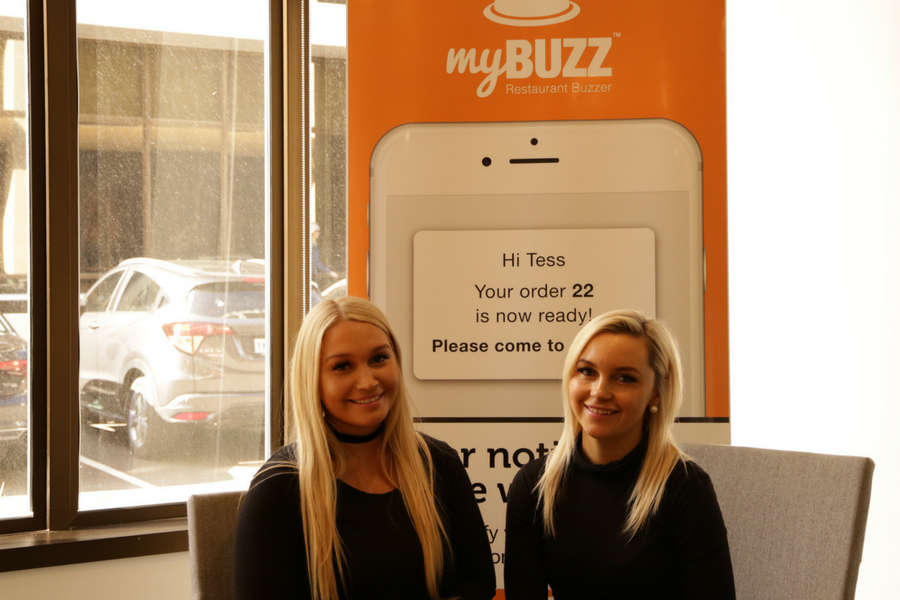 It’s a common scenario – you order a meal at a restaurant, the waiter gives you a buzzer, and the buzzer fails to alert you when your food is ready. Countless times I’ve stared at the counter, waiting for my buzzer to go off and wondering if its my food that’s going stone cold.

It’s also hard, however, being wait staff on the other end. Buzzer batteries run flat and customers accidentally take them out of range. When it’s lunch hour, an angry customer with cold food is the last thing wait staff want.

This is where entrepreneurs Allyssa Sabbatucci and Charli Ervin decided they wanted to make a change. Their solution is myBUZZ, a system that replaces restaurant pagers with a customer’s phone and sends alerts via messages when a customer’s order is ready.

“We were with a bunch of friends at a pub and we were all sitting there surrounded by all these phones and buzzers on the table. Sure enough our buzzer didn’t go off,” said Sabbatucci. “We were sitting there joking to ourselves, imagine if they could buzz our phones, why do we need all this?”

Together Sabbatucci and Ervin created myBUZZ, an admin portal where businesses can automatically or manually communicate directly to customers. The portal also works as an app allowing customers to check-in to venues from their mobile. A business can send confirmation messages to customers on their order and the expected wait time.

myBUZZ can also be used side by side or in the absence of a PoS [Point of Sale] machine. Currently the startup is integrating with PoS systems like Kounta to streamline the order and payment process.

The startup has a yearly subscription fee of $999 for businesses and the app is free for download and use for customers.

To create myBUZZ, both Ervin and Sabbatucci jumped head first into the startup scene, a world they previously didn’t even know existed.

“Before myBUZZ I worked in marketing and PR within the Australian government and Charli was originally a hairdresser,” said Sabbatucci.

“It was really about something we shared a passion with, and we thought, what do we have to lose, let’s give it a shot. We don’t want to die wondering.”

From small beginnings, one of the first customers to use myBUZZ was dessert restaurant Patissez in Canberra. The restaurant is home of the Instagram-famous dessert trend, the freakshake. Patissez has a social following of more than 90,000 and in the past year myBUZZ has sent over 30,000 notifications for the business.

myBUZZ has now branched out into businesses around Australia, from Byron Bay to Wollongong and is ready to expand into another 35 businesses overseas. Ervin revealed the startup is also looking at implementing the product across other industries like healthcare and automotive.

“At the moment health is a massive one for us, especially the emergency department. If you’re waiting for an appointment, you’re waiting there potentially with 50 other people, so wouldn’t it be better if you could go home and still be notified when your appointment’s actually ready?” said Ervin.

Hospitals, particularly in the ACT and NSW, have fallen below the national emergency access target. As of last year, the Australian Institute of Health and Welfare revealed that the ACT has the lowest proportion of urgent patients who are treated on time, with just 50 percent being seen within a 30 minute window.

While the growth of myBUZZ is developing across borders and industries, Ervin explained it was not always smooth sailing. As neither founder comes from a technical background, finding tech talent was a big challenge.

“It’s sort of laughable now but when we look back on the experiences in the early part it was definitely an expensive lesson just trying to find local developers. Finding something local for us in Canberra was quite difficult, so we ended up going somewhere overseas. We off shored it, and then someone lost our code,” said Ervin.

myBUZZ also connected with a developer in Nepal who they lost contact with when an earthquake hit. Fortunately the developer was unharmed, however his laptop with all of the myBUZZ code could not be retrieved.

“Sometimes, unfortunately, you just learn from going through that experience yourself. Now we have in-house developers and we’ve also got a dev team,” said Sabbatucci.

In living in the NSW border town of Queanbeyan, myBUZZ is closer to Canberra than Sydney. However, despite being across the border the startup has been able to access the Griffin Accelerator and the Canberra Innovation Network.

“Being out of town and not being central to Sydney makes things a bit difficult travelling and going to pitch investment nights,” said Sabbatucci.

“Accessing that support is hard enough to begin with and when you throw in that you’re a bit secluded it can make it harder, but if you’re determined you can work through it.”