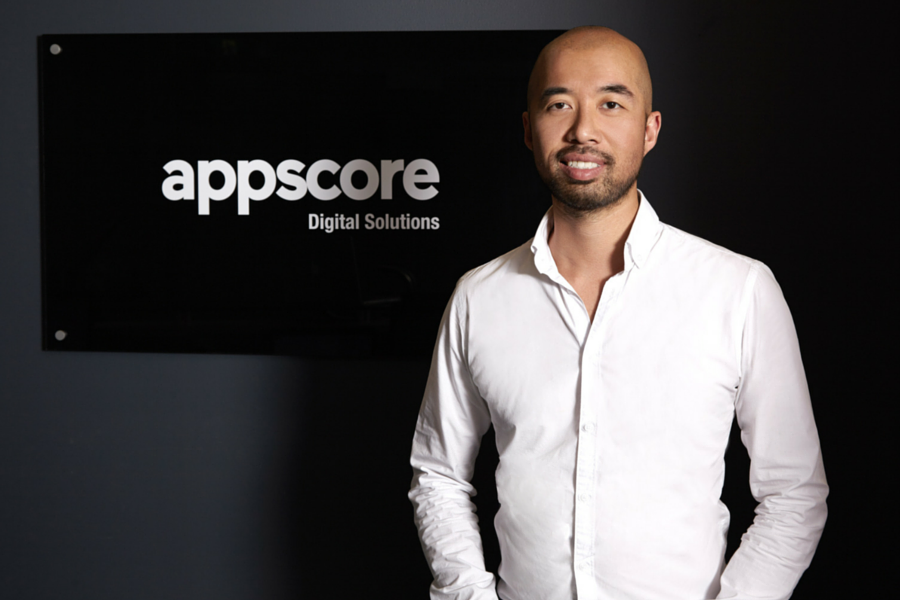 When apps were still fairly new and marketers sought to educate the market about what exactly apps could help us do, they came up with the memorable ‘there’s an app for that’ tagline. Fast forward a couple of years and there truly is an app for almost anything you could possibly think of, and countless companies out there creating them.

Founded by Alex Louey and Nick Bell in 2010, Melbourne company Appscore has become one of the leaders in Australia’s app development space. Louey, who worked as a project manager for companies including ANZ and BHP Billiton, and Bell, founder of SEO company Web Marketing Experts (WME), were flatmates at the time, and decided they wanted to launch a business together.

“I wanted to get out of the corporate space and build something from scratch. That was always a drive of mine, and Nick had already started, so we ended up starting an app company. We had experience in digital, we had experience with technology, and with the app space just kicking off, we thought it was an opportunity for us to really use our skills to help guide the market a bit,” Louey said.

Thanks to their combined experience in the digital and IT space, Louey and Bell were able to leverage existing connections, particularly Bell’s through WME, to bring on board staff and start finding customers. With apps not yet truly mainstream at the time, the pair spent time educating the market about the value apps would bring to their business.

Appscore works with companies of varying sizes, from startups through to corporates including Mercedes Benz, Nestle, and BP, but the majority of its growth is now coming through a partnership with Telstra. Launched 18 months ago, the partnership sees Appscore provide mobile development and digital marketing services to Telstra and its clients.

“Most people know Telstra as a telco, but over the past 3 to 4 years they’ve sort of been transforming slowly into a digital solutions company. Beyond providing phone and data and all that jazz, they actually have some really creative solutions for their business customers, because to be a company like that, you’ve always got to continually add value to your customers. Telephone and data has only done so much,” Louey said.

Appscore started off purely in the mobile space, delivering custom mobile solutions to Telstra’s business and corporate customers; from there, the company began delivering cloud services and digital marketing solutions in conjunction with WME, and is now helping Telstra onboard clients to off the shelf apps.

Louey said partnering with a giant like Telstra was always part of the plan for Appscore.

“They’ve changed their position in the market to a dual solutions company and we saw that, as a partner, there are a lot of synergies – they can’t deliver certain services by themselves because they’re just not built that way, and that’s why they have a really big partnering channel,” Louey said.

Appscore contacted Telstra at just the right time, Louey said, when the company was beginning to make a big push to mobile apps.

“It was literally cold calling. Cold calling them up, telling them our story and our value proposition and how we believed we would fit their current business model and how the customers would benefit from our services,” he said.

Appscore works across Telstra’s customer portfolio, from its small and medium business customers through to corporates, with a number of the startups Telstra has invested in through Telstra Ventures also working with the company. While it isn’t currently collaborating with Telstra’s accelerator muru-D, Louey said Appscore is looking to get more involved in that side of Telstra’s work.

While this means the company will always be open to working with startups, Louey said that going forward, Appscore will be aiming itself primarily at middle tier clients like medium sized businesses who have thus far been left behind by the digital revolution.

“Appscore has always been a big business thing, for companies that can afford millions of dollars for a mobile app, but we want to help the middle tier-type client get the benefits of having mobile device and mobile workforce, and help them integrate with off-the-shelf systems….I think there’s a very big untapped market there in the SME space,” Louey said.

Further international expansion is also on the cards. Like Bell’s Web Marketing Experts, Appscore has opened a number of offices around Asia, with much of the growth in these markets coming from corporate clients.

“It comes down to taking calculated risks and wanting to expand, having high ambitions and not being scared to fail. We’ve done stuff that haven’t succeeded but we just make sure whatever we did, we learn from and don’t do it again,” Louey said.

The failures include a few investments in bricks and mortar ventures, but Louey believes the experiences served he and Bell well. In spite of the other ventures, Appscore itself is well placed; the company’s local revenue is projected to reach $25 million in 18 months.