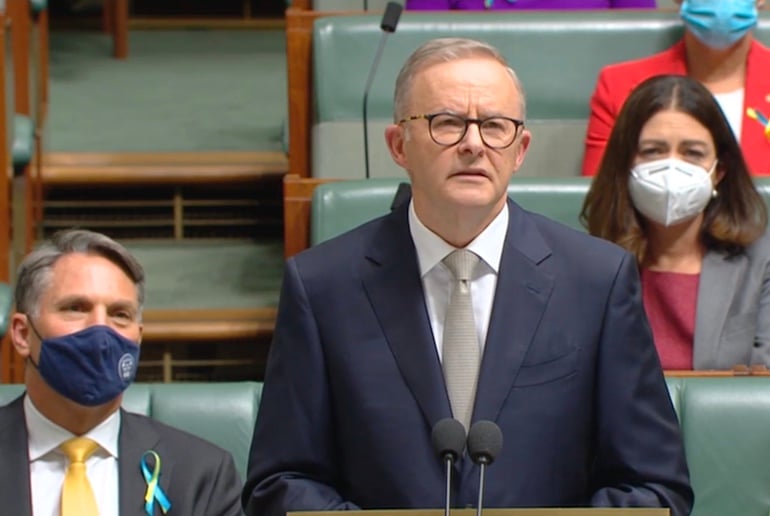 It’s a paradox. The Morrison government, in deep trouble, has produced a budget that’s shamelessly designed to try to buy votes.

But Labor, censorious in its rhetoric, has found itself having to embrace the budget’s central measures.

Anthony Albanese neatly summed up the situation in his Thursday night budget reply.

“This government might as well have stapled cash to your ballot paper,” he said. And then immediately after: “We’ll deliver those payments as well, because we know the pressure Australians are under.”

It was never going to be otherwise. Scott Morrison earlier told parliament Labor had “put up the white flag on the budget”. Not exactly. Labor sensibly avoided the battle in the first place.

Albanese – whose speech was inevitably something of an anti-climax after the address to parliament by Ukrainian President Volodymyr Zelenksyy – chose to make his policy announcement on an issue that concerns very many Australian families – aged care.

His $2.5 billion four-year plan promises more nurses and carers for facilities and better food for residents. There would be tougher regulation and greater accountability by providers.

Albanese reiterated that a Labor government would urge the Fair Work Commission to give the workers in this sector a pay rise. But once again he did not offer any view on how substantial that should be. The cost to government of any such increase would be in addition to the $2.5 billion.

The Morrison government has fallen down on aged care, despite promises and extra funding. Many of the inadequacies go back to the core problem of the workforce, with low pay making it hard to attract and retain enough people, let alone qualified staff. The government has refused to intervene to support a wage rise.

Albanese will hit a community nerve with his policy. It is a crucial area, where much more must be done. It also fits into the opposition leader’s “small target” strategy (as well as into Labor’s traditional strength on issues such as health). This was a safe policy. No reasonable person could object to taking the actions being proposed.

It would be all good reform but, in line with the Albanese broad policy approach – “renewal not revolution” – it was notable he did not choose to use the occasion to strike out with a grand new idea.

But why would he take any such risk? Labor has seared into it from 2019 the danger of being too bold in policy. To the extent possible Albanese wants to let the government stew in its own juice.

Morrison needs this week’s budget to alter the mindset of surly voters, although that is a major ask.

Voters are routinely an ungrateful lot. Labor always complained it wasn’t rewarded for avoiding a recession during the global financial crisis. It was just criticised for the faults in some of its response.

People know they’ll get the budget relief on petrol and the government’s handouts, whatever way they vote, with some benefit felt before polling day.

There’s likely to be considerable cynicism from voters. They will recognise what’s there for them but they may just think “that’s the least the government can do for me”. What, if any, “bounce” the Coalition gets in the polls might be transitory (just like the cost of living measures).

Given the bipartisanship on the core measures, the billions of dollars in relief may have been politically neutralised.

There is the more elusive question of the voters’ mood, the electoral vibe.

Here again, the benign budget is not necessarily going to shift the sentiment of swinging voters.

We used to lament that we had a prime ministerial rotisserie, as parties kept rolling leaders. Partly, of course, that was driven by the public turning against leaders quite quickly, with this reflected in the opinion polls, to which the parties reacted.

Despite some earlier media speculation, Scott Morrison’s leadership has not been threatened from within. But there is a strong feeling, including within the government, that he’s reached as used-by date with many voters.

After the “miracle” victory of 2019, his credibility has been progressively hollowed out during the term. The leader so praised as a strong campaigner verges on a caricature, seen as not there when he should be, out of touch and arrogant. He seems particularly unwelcome in the “leafy” seats where Liberals are fighting teal candidates.

Albanese on Thursday night had some cut-through lines about the government. “They’re asking you to trust them that somehow they’ll be better in their fourth term. After all the waste and rorts and scandals, can you imagine how arrogant and dismissive they will be if they enter a second, long decade in office?”

The importance of NSW Liberal senator Concetta Fierravanti-Wells’ attack this week on Morrison’s character was that it reinforced what others, including from the Coalition, have said, publicly and privately, about how he has lied and treated people poorly.

In one sense Fierravanti-Wells, who has long had grudges against Morrison, was just another voice, and pollsters will tell you people have already made their assessments of Morrison. But her furious speech publicly re-opened the issue of what sort of man he is, with crossbenchers Jacqui Lambie and Pauline Hanson jumping in to have their say, and John Howard coming to Morrison’s defence, suggesting he is “forceful” rather than bullying.

Of all the marks against Morrison, the 2019-20 bushfires were perhaps the most damaging, because they reshaped his image. He was missing in action (the Hawaiian holiday) and then offered a sort of opt-out excuse (he wasn’t the one who held the hose).

Leaders start with a store of political capital, which they progressively spend. Invested in a way perceived to benefit their shareholders, the voters, it can grow (an example is Mark McGowan’s stunning re-election result). But mistakes and misdeeds can erode the capital, to the point of bankruptcy, which in political terms is the loss of an election or leadership.

We’ll know in May whether Morrison enters political bankruptcy, but there is little doubt he’s been running dangerously close.