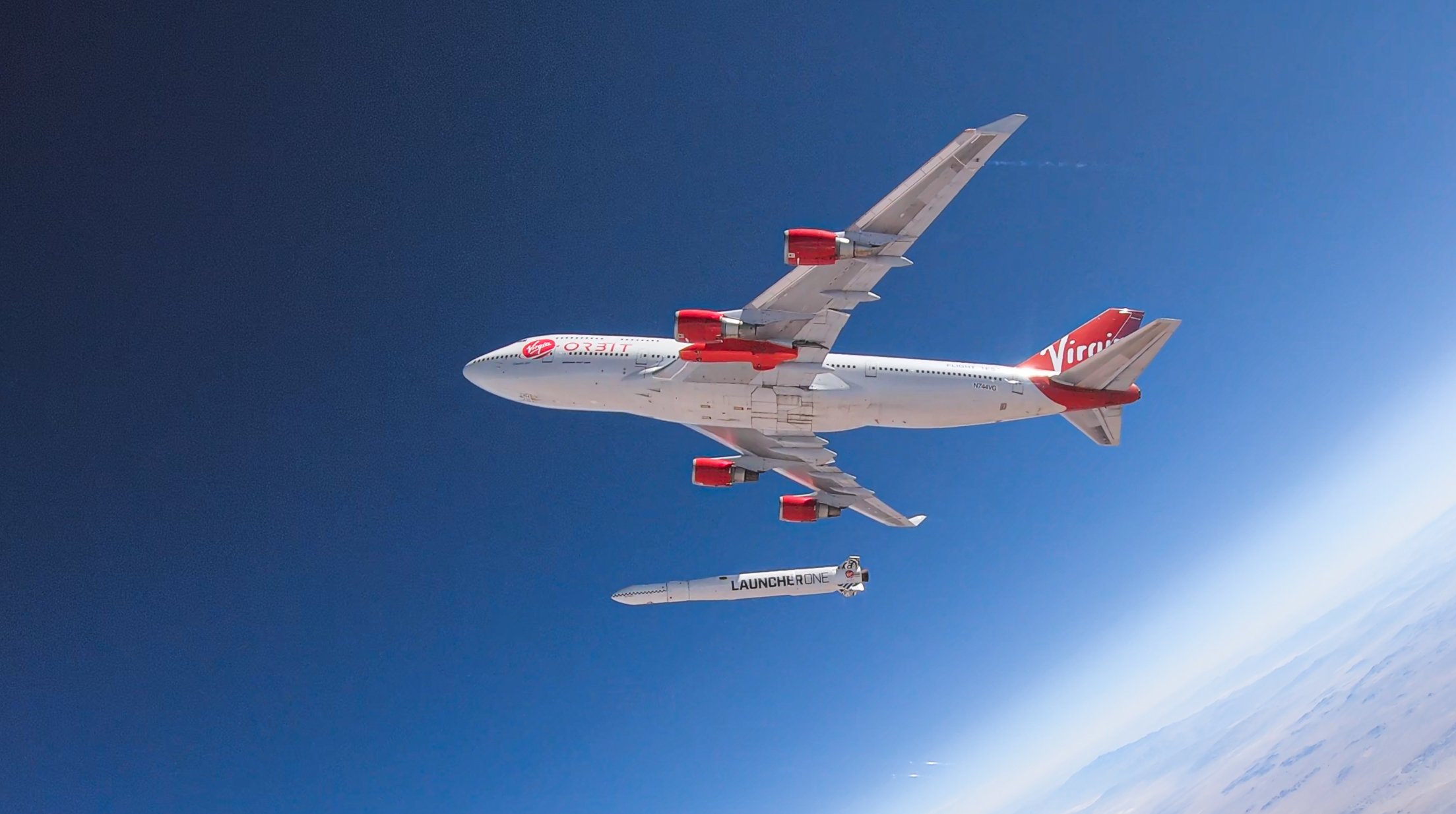 Virgin Orbit's satellite launcher rocket is designed to be fired into space from a 747. Photo: Virgin Orbit

Here are some things we’ve noticed to share with you

Some Googlers will be getting out their best t-shirts to return to the office on July 6. CEO Sundar Pichai said returning to work will remain optional for the rest of 2020 in a blog post to staff, but for anyone needing to head it, it will be  on a rotating basis – “think: one day every couple of weeks, so roughly 10% building occupancy” – with those needed notified on June 10. By September, he’s hoping to crank the buildings up to 30% capacity. Everyone will get US$1000 to set up their home office.

“Moving ahead, we are looking to develop more overall flexibility in how we work. Our campuses are designed to enable collaboration and community—in fact, some of our greatest innovations were the result of chance encounters in the office—and it’s clear this is something many of us don’t want to lose” he wrote.

“At the same time, we are very familiar with distributed work as we have many offices around the world and open-minded about the lessons we’ll learn through this period.”

Amazon is making a play for California robotaxi startup Zoox, the WSJ says, , and others are circling too according to Forbes.

Having a valuation of US$3.2 billion at its last raise, the deal is expected to be well under that figure with a Pitchbook analyst going so far as to say “$1.1 billion would be a fair price”.

Ouch. That’s almost on a par with the funding Zoox has raised since its launch in 2014

Australian artist and designer Tim Kentley-Klay co-founded Zoox with computer scientist Jesse Levinson with the goal of building electric robotaxis and delivery vehicles for company-branded fleets – something right up Amazon’s alley. Kentley-Klay was CEO, but was punted from the business a little under two years ago. And if you click on ‘get the facts, it leads to this: 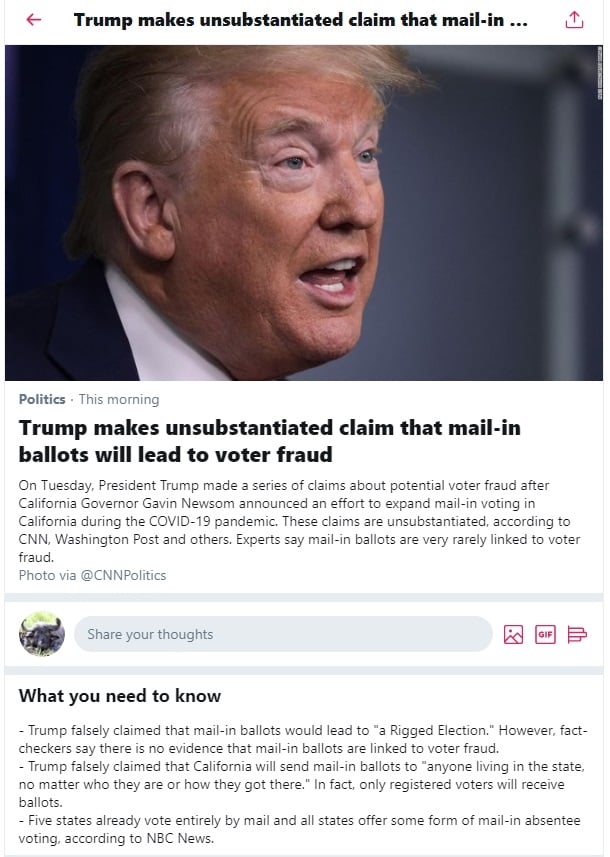 Which lead the US President of the US to whine about his free speech being curtailed.

….Twitter is completely stifling FREE SPEECH, and I, as President, will not allow it to happen!

Yeah. Nah. But we can’t help thinking that Twitter’s seemingly bold move might have something to do Trump’s tweets last week, in which he suggested MSNBC breakfast host Joe Scarborough, of Morning Joe fame, might have murdered one of his staffers 19 years ago when he was a Congressman.

Lori Klausutis was 28 when she was found dead in the office. She had an undiagnosed heart condition, fell and hit her head on her desk. Her widower, Timothy Klausutis, wrote to Twitter CEO Jack Dorsey on May 21 begging the company to remove the tweets, arguing they so egregiously breached the company’s T&Cs, they’d get anyone else banned from the site.

He’s had to live with conspiracy theorists regularly trashing the memory of his wife and their marriage for nearly two decades.

“The President’s tweet that suggests that Lori was murdered — without evidence (and contrary to the official autopsy) — is a violation of Twitter’s community rules and terms of service,” Klausutis wrote.

“The President of the United States has taken something that does not belong to him — the memory of my dead wife — and perverted it for perceived political gain. My wife deserves better.”

Five days later on May 26, Twitter responded saying the Trump tweets did not breech the company’s terms of service and it won’t remove them, adding that it was “deeply sorry about the pain these statements, and the attention they are drawing, are causing the family”.

While Virgin Australia’s still hoping for a buyer, Richard Branson’s other space project, commercial satellite launch business Virgin Orbit, hit its own turbulence when it tried to launch a rocket into orbit from a 747 over the Pacific Ocean on Monday.

The LauncherOne rocket was released from the plane “Cosmic Girl”, but the mission was “terminated” shortly into the flight, with the team saying there was a malfunction that caused the booster engine to extinguish 9 seconds after release, the company explained in a post-mortem blog post.

The rocket probably had some humpbacks off the California coast going WTF?! when it hit the ocean, but thankfully it didn’t explode.

“We cannot yet say conclusively what the malfunction was or what caused it, but we feel confident we have sufficient data to determine that as we continue through the rigorous investigation we’ve already begun,” the blog says.

And they have a spare, so it looks like the next test is coming up soon.

Here's our next rocket, built and ready for system-level testing in our final integration area as it waits for its turn to fly to space. pic.twitter.com/Zhc2uDtMMC

UK payments solution provider Checkout.com has snapped up Perth startup, Pin Payments for an undisclosed sum. Founded in 2013 by Grant Bissett and Dominic Pym, the online payments fintech created the first unified approach to payments for small to medium-sized businesses in Australia. It’s currently used by more than 12,000 businesses here and in New Zealand and supports ecommerce platforms such as Shopify, and BigCommerce and Magento. The Pin Payments’ team of 14 will join Checkout.com and be split across their existing offices in Perth and Melbourne.

HELENA BONHAM CARTER stars in this groundbreaking Cinema Quarantino Production DAS FONE HELL. At vast expense, filmed on two continents over what (seemed like) five years , this profound and heartbreakingly candid insight into Modern Life will shake you to the core (Pilates 101) pic.twitter.com/aVXCfvAyfd

Previous article BRIGHT SPOT: How Simul tackles the Microsoft finalV79546.doc problem of teams working remotely
Next article If industrial relations is the new frontier in covid-19 recovery, it’s time for a rethink on how disputes are resolved
Via News & Analysis
Tags 5 thingstwitterVirgin OrbitZoox