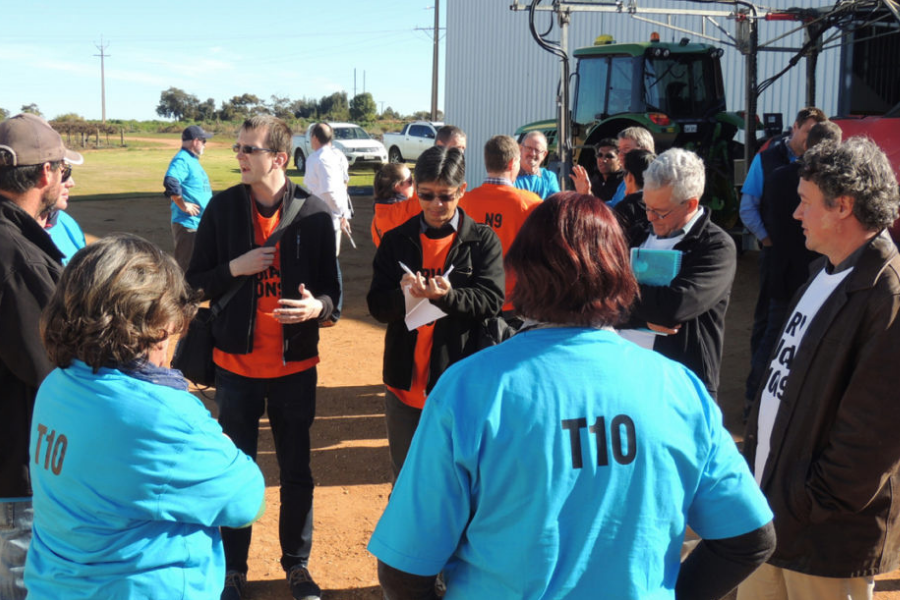 Riverland Wine has partnered with the University of Adelaide, Wine Australia and the South Australian Government to create a Digital Vineyard Guidance System – a platform to filter data collected from a suite of remote sensors to improve vineyard efficiency.

Devices such as moisture monitors and evaporation sensors have been used in vineyards for some time.

Riverland Wine Executive Chair Chris Byrne said taking existing vineyard technologies, adapting others to the industry and integrating them through a single platform would take much of the ‘guesswork’ out of growing wine grapes.

“Using digital technology we believe we can have far more accurate, precise and timely information about all of these aspects of being a successful and a cost competitive wine grape grower,” he said.

“It’s about enabling growers to much more precisely understand what is going on in their vineyard so they can predict with more precision what their yields are likely to be, the rate of maturation and a range of measures to take a lot of the time out of the vineyard previously spent doing maturity readings or bunch counts or measuring berry sizes.”

The project started earlier this year with a meeting of the Riverland’s top growers and leading academics from the University of Adelaide’s School of Engineering, Computing and Mathematical Sciences billed as ‘The Thinking Ten meets the Nerdy Nine’.

The vignerons soon discovered that much of the sensing technology already existed and could be adapted to viticulture but it was the creation of a platform to manage the data in real time and present it in an easy-to follow dashboard that would be the key to its success.

The project received a $134,000 State Government grant from the South Australian Wine Industry Development Scheme this week, which is being matched by Riverland Wine and Wine Australia to allow the project to begin in earnest.

Byrne said technologies linked to the platform could include hyper-spectral images, canopy temperature sensors, digital weather stations and devices for predicting the likelihood of a downy or powdery mildew outbreak.

“By having these devices in the vineyard to capture all sorts of data and then filter it through a single digital platform we are in a position to enable growers to manage far more effectively when it comes to risk management and time management,” he said.

“If you don’t have any mildew then why would you set out on your regular 10-day mission to spray the whole vineyard spending a whole lot on diesel and chemicals and time.

“If you want to really manage your canopy precisely you need to be able to have a link between your moisture monitor, your evaporation readings and your irrigation controller to regulate the amount of irrigation based on what the plants replenishment needs are, not based on the fact that it’s a Wednesday and you always irrigate on a Wednesday.” This growing season, which traditionally runs from October to April in Australia, a number of devices will be tested in a trial vineyard.

The Riverland in the east of South Australia near the banks of the River Murray is the nation’s largest grape producing region contributing about a quarter of Australia’s annual crush.

Byrne said the plan was to use the initial six-month project as a springboard into a much larger long-term project funded through the Australian Federal Government’s Rural R&D for Profit Program.

He said the Riverland was pushing hard to be at the forefront of precision viticulture.

“If we get this right then there is no reason why the Riverland can’t become a centre of excellence for precision viticulture using digital technology in much the way we were the home of irrigation technology for many years,” Byrne said.

“We’ve got the research centre at Loxton and it would be brilliant to see it coming to life around something as exciting and futuristic as this sort of technology.”

The Loxton Research Centre in the heart of the Riverland and is home to a number of private and government tenants including Primary Industries and Regions SA, The Almond Board of Australia and Riverland Wine.

South Australian Minister for Primary Industries and Regional Development Tim Whetstone said the trial could be a game changer for the industry.

“This system will help our growers make better on-the-ground decisions as part of their day-to-day work and will enable stronger community connectivity to provide a platform for information sharing,” said Minister Whetstone.

“The project will provide important proof-of-concept developments needed to inform the potential of a broader program.”