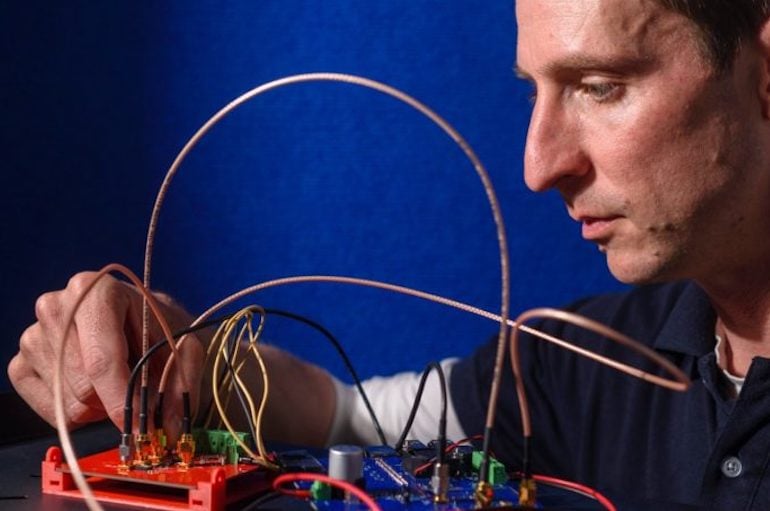 The Kanyini satellite will be Australia’s first state-based satellite.

It’s the multi-million-dollar satellite that will collect invaluable data from space once it takes off into the cosmos.

But the pieces of the puzzle that make up the $6.5 million CubeSat mission, dubbed Kanyini, have been scattered across labs and workshops across South Australia – until now.

Leading South Australian space companies have procured their components and brought them together for the first time. It’s a major milestone for the Kanyini satellite, which has secured a spot onboard the SpaceX Transporter next year. Once it blasts off into low Earth orbit, it will be Australia’s first state-based satellite.

Aerospace company Inovor Technologies, Internet of Things provider Myriota and research co-op SmartSat CRC have worked on the space project from their offices in Lot Fourteen, an innovation and space industry precinct in the heart of Adelaide.

Working with the South Australian government, the data collected from the satellite’s three-year sun-synchronous orbital mission will inform future space missions and help improve state services such as emergency services and environmental monitoring.

SmartSat CRC is leading the mission. The company’s satellite systems manager, Nick Manser, says pulling together all the components into an integrated flatsat, or test satellite, is a “big milestone” for the project.

“Up until this point, everyone’s been working on their components independently, but we’ve now reached an important milestone where we’ve started to connect everything up together in a lab for the first time,” Manser says.

“We’re kicking off a testing campaign to make sure that all that equipment plays nicely together and it’s going to work when we send it into space.”

The project is a six-unit CubeSat, roughly the size of a shoebox and weighing about 12kg.

The satellite has two payloads onboard, one for earth observation and the other an Internet of Things (IoT) payload. The IoT payload will allow the Myriota network to talk to sensors and devices back on Earth.

SmartSat CRC has procured a small hyperspectral camera fitted to the satellite and power the earth observation payload.

Built in the Netherlands, the HyperScout 2 Flight Model instrument has sensors that allow it to capture imagery of the planet’s changing surface. Once it’s launched next year, the satellite will orbit 500km above Earth and allow those back home to monitor water quality, crop health and bushfire resilience.

Manser says SmartSat CRC was drawn to the hyperspectral camera because of its onboard processing capability, which is a key part of modern space missions.

Satellites would usually downlink collected data to Earth before it could be analysed. However, he says this piece of technology can do the computation on board.

“We have researchers already looking into how they can use this sort of information for things like smoke detection for bushfires, monitoring fuel conditions in our eucalypt forests to improve our response and preparation for bushfires and inland coastal water quality monitoring,” Manser says.

The Kanyini satellite is a South Australian Government initiative that strengthens the competitiveness of local businesses in the small-satellite supply chain and builds capability to support the National Space Mission for Earth Observation.

“The mission is providing an opportunity for partner organisations to develop new technologies so they can then test them in space and it will also give us experience in operating these instruments in space and that will help us inform future space missions,” Manser says.

Kanyini is a Pitjantjatjara word that describes the “principle of responsibility and unconditional love for all creation. The name was suggested by students at Findon High School in Adelaide’s western suburbs as part of a competition to provide the satellite with a name.

Manser says it was essential to keep children interested in space development and advancement in this type of technology.

“It’s really important to emphasise that the Kanyini project isn’t just about building industry,” he says.

“It’s about getting the next generation involved and inspiring them about future opportunities in space and demonstrating the impact of space data on everyday life.”

Previous article Bot’s up Doc? How an AI-generated tweet made me think deeply about how the worst VC could be the best one for you
Next article Can a CEO or founder ever really take a break from work?
Via Space
Tags contributor postspace tech