Hitting the bottle: Grocery delivery startup Milkrun looks to alcohol to get profitable as it hunts for more funds 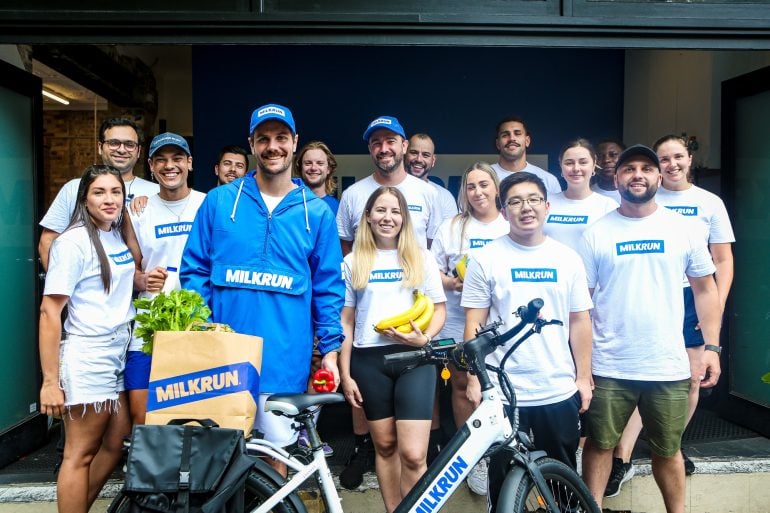 The Milkrun team at their Surry Hills base

The 10-month-old Sydney startup will cut overtime, reduce the use of casual employees and hopes that alcohol sales will boost margins and turn around ongoing losses.

The Nine newspapers report that Milkrun, which banked $75 million from Tiger Global in January, is ditching its 10 minute delivery promise, and is already on the hunt for more cash in a new capital raise.

The papers obtained investor pitch documents that reveal the company generates around $4 million in monthly revenue and hopes to double that to an annual run rate of $100 million by the end of 2022.  But the pitch, prepared in April, had the business losing $13 per order. Milkrun founder and CEO Dany Milham said that figure is now $10 and he believes they will be in the black, making $1 an order, within a couple of months.

Milham told Startup Daily that it was “very misleading” to say the startup was moving away from rapid delivery.

“Our average delivery time is 11 mins and my email to customers on Friday was directly related to this, committing that we’re only going to get getting quicker,” he said.

The $10 loss on each other ” is actually a good number when compared to international peers”, he said.

“This is in no way is a bad thing for our business at this stage and the fact it used to be $40 and even $13 two months ago, shows we are hitting our targets and scaling as planned,” Milham said.

The pitch deck outlines that Milkrun, which operates in Sydney and Melbourne, will go on to generate more revenue per customer than Amazon’s US retail business and expand into areas such as insurance and takeaway, forecasting that the average order value in Sydney’s Eastern suburbs will rise over 15 months from $28.35 to $41.72 by June 2023, with alcohol included in the mix. It currently sits at $34 up, sans booze.

To improve margins, the business plans to reduce staffing costs, which currently sit at around $42 an hour, by more than 25%, down to around $30.

It’s not know how much runway the startup has left follow the $75 million raise five months ago.

As well as dealing with competition from global tech startups such as Ubereats, Doordash and Aircart, Milkrun also faces a challenge from supermarket giant Woolworths, which plans to introduce a 60-minute deliver service on top of its existing same-day online order offer.