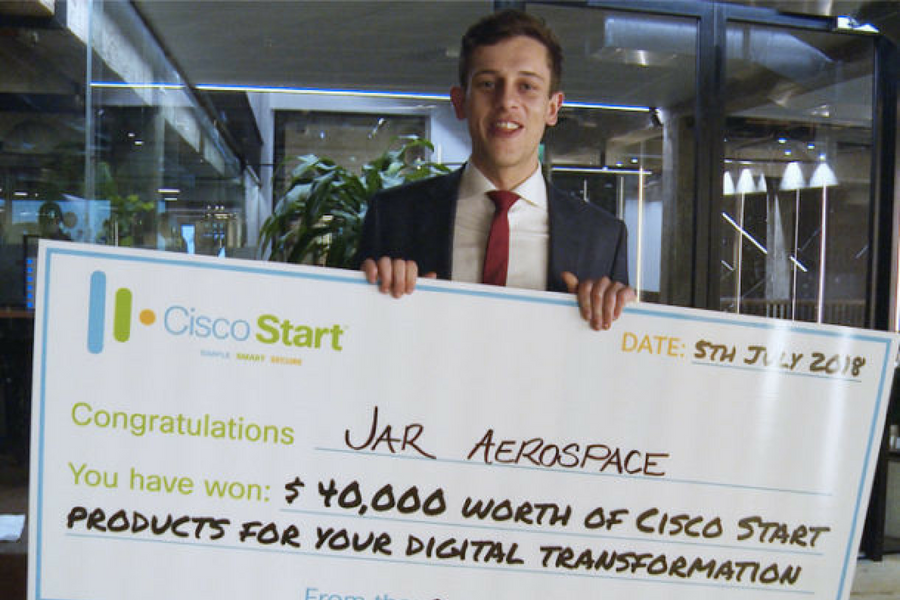 Tech startup JAR Aerospace has walked away with the top gong at the Cisco Start Challenge pitch completion. The company, whose focus is on developing and manufacturing purpose-built Unmanned Aerial Vehicles (or drones), scored $40,000 worth of digital transformation for their business.

Samuel Lewinson, one of the four cofounders of the venture, said the prize would allow the startup to have greater end-to-end security and faster network connectivity. Lewinson also suggested winning the pitch comp validated their business ideas.

The twenty-something, who has a degree in medical science, said JAR Aerospace was born following an exchange trip for six months to Arizona.

“I went on the exchange with my best mate Jack – who is also now the COO of JAR Aerospace – and an aerospace engineer to boot. We’d spent a semester partying and decided we wanted to be more focused in what we are doing and apply ourselves to something meaningful. With Jack being an aerospace engineer we decided to focus on aerospace,” Leiwnson said.

“After research, we settled on drones as we realised they had a good market opportunity and we could eventually expand our program to missiles and rockets.”

Lewinson acknowledged entering the aerospace game was pretty ambitious, but said as four twenty-year-old boys they figured they had nothing to lose.

“We were all looking for something substantial to sink our teeth into and we spoke to Dan and Lachie (JAR Aerospace’s other two founders) and it didn’t take too long to kick things off.”

In true startup fashion, the boys kicked their venture off from the garage of one of their parents’ homes in the Central Coast.

“That was an interesting six months, working out what we wanted to do,” Lewinson smiles.

“Then we found out about the Defence Force opportunity. We were able to secure some funding and were successful in tendering for the first round of that. And five months since, we are waiting to commence phase two.”

Lewinson said the Defence Force contract is something of a boon.

“The user case we first used was to transport blood and organs over suburban areas. The idea behind that use-case was drones are not a very trusted and liked technology bar kids playing with them as a toy. So, we set out to show this was an application that could remove that stigma and show the socially beneficial causes drones could be used in. But then we were at an industry conference and found out about the defence contract… he trails off…

And the rest, as they say, is history. JAR Aerospace quickly cut through the competition to secure the first phase of the contract and now have their sights set on winning phase two and bringing their vision to fruition.

But working with Defence is not without its frustrations.

“Obviously, there are a lot of checks and gates to go through; and all these systems and quality assurances and design concepts that need to be certified to national and global scales,” Lewinson said

“The team we are building and momentum we are starting to gather is quite remarkable. We’re beyond where we thought we would be and we’ve had incredible help and amazing advisors.”

As a startup competing in a very competitive arena, Lewinson admitted there have been challenges.

“Being under-resourced in the first six months there was more of an inkling of that. The past twelve months have been about juggling and managing. Growing into a 20-person company in six months had a lot of growing pains – so it can be frustrating at times. I could be working on insurance or creating a leave form or writing a big defence form document,” said Lewinson of the dichotomy of his tasks.

However, winning the Cisco Start Challenge has ensured there will be one less worry on this founder’s plate.

“It’s great for our confidence and provides a validation for our ideas and concepts. It provides the validation we are looking for. We are working hard day-in-day-out – so being publicly applauded is incredible when we are going through the harder times.

“And obviously the resources it provides our company will provide an amazing transformation for our team and the way we do business.”

The other four SMBs that were shortlisted after the competition ended in June include Space Ops (NSW), Smart Paddock (VIC), Stratafy (NSW) and Advisr (NSW).