First announced last October, payments app Beem It has launched this month with backing from Westpac, Commonwealth Bank, and NAB.

Essentially a local version of Venmo, the app allows users to send each payments and requests for payment – it’s not the first to try to be Australia’s Venmo, but the first to be backed by three of the big four banks. Beyond consumers, the app also allows businesses to accept payments.

The app evolved out of the banks first banding together last year to fight Apple to have the right to offer their own digital wallets to customers using iPhones rather than integrating with Apple Pay. The group of banks, which also included Bendigo and Adelaide Bank, was denied this authorisation by the Australian Competition and Consumer Commission (ACCC) last March.

Mark Wood, CEO of Beem It, said, “We’re excited to bring instant payment technology to all Australians, ensuring that everyone can pay, request and split money via their smartphones, regardless of who they bank with. Beem It uses real-time banking technology to transfer funds between banks and ensure money doesn’t get in the way of great life moments.”

To sign up, users must validate their account with ID – they can choose from their driver’s license, passport, or Medicare card – as well as their debit card. The app has a sending limit of $200 a day and a monthly receiving limit of $10,000, with Beem It stating every transaction is authenticated and subject to real-time fraud monitoring, with “bank-level security”. 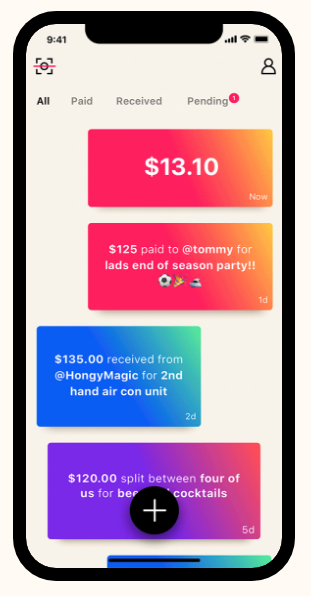 Beem It also states that customer data is only shared for “government regulations and security and fraud purposes”.

The launch comes as a survey of over 1,000 Australians conducted by ACA Research for Beem It found Australia has $6.2 billion in “unpaid mate debt”.

According to the survey, 68 percent of Australians have lent money to a friend and never gotten it back, with 67 percent letting rounds at the pub slide, 56 percent covering the taxi themselves, and 52 percent paying for dinner when restaurants don’t split the bill.

A quarter of the respondents stated that they let it go because they considered the amount too small, while 19 percent stated they were too embarrassed to ask for payment.

Beem It’s launch also comes as the financial services space prepares for the implementation of the open banking scheme in July.

Treasurer Scott Morrison announced open banking will be phased in with all “major banks” to make data on credit and debit card, deposit and transaction accounts available by 1 July 2019, and mortgages by 1 February 2020.

Data on other products, such as personal loans, must be made available by 1 July 2020, with all remaining banks will be required to implement open banking on a 12 month delay on the timelines of the major banks.

In the meantime, a number of banks have signed up to the PayID system, which also looks to make sending and receiving money easier, while a handful of digital-only banks are also preparing to launch with a focus on simplicity for customers.

Volt Bank was founded with the mission to “develop better, more honest products and services that give you greater control of your money”. The company states it will use “technology to adapt to your changing needs and to reduce costs so we can give more back”.