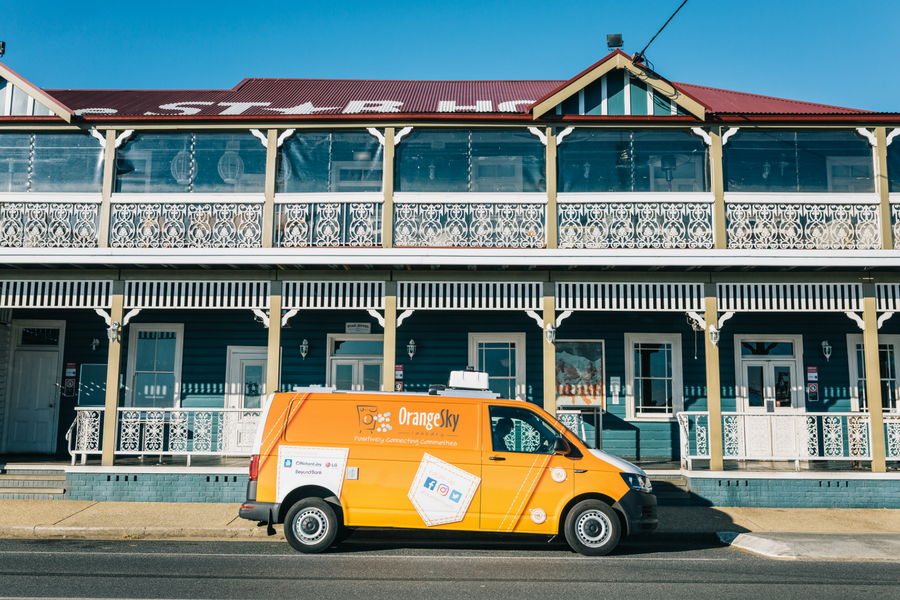 Orange Sky Australia has well and truly hit its stride since it was founded by Brisbane mates Nic Marchesi and Lucas Patchett in 2014.

The service, which has vans fitted out with washing machines and dryers travel to 172 different locations around Australian cities and towns to provide free washing and drying for people experiencing homelessness. Orange Sky now has 24 vans powered by 1,000 volunteers across the country.

These vans are now washing more than six tonnes of free laundry each week and providing around 150 safe hot showers, but for Marchesi and Patchett, Orange Sky’s biggest achievement is facilitating “1,200 hours of really awesome conversation on orange chairs each and every week”.

It’s a long way away from where the cofounders thought they would be when they started out. As Marchesi put it, the pair’s mission was simply to “help improve the lives of people doing it tough around Brisbane” by washing and drying clothes for homeless people, or as Orange Sky refers to them, friends.

“That was our finish line, and it took us a while to get to that finish line, but then we got there and realised we had stumbled onto something far more important than just washing clothes. Our mission at Orange Sky now is to positively connect communities, and we’re passionate about how we do that in an authentic way,” Marchesi said.

For all the high-tech gadgets in the world, washing and drying clothes still takes time, and it’s during this time that Orange Sky believes it can make its biggest impact; people sit together on the orange chairs as they wait for their washing, engaging in easy and non-judgmental conversation. These conversations can be the beginning of the Orange Sky friend’s reconnection back into society.

“Tonight in Australia, one in 200 people are out there disconnected from the community. I believe Australians want to give back, and what we’ve found is we can provide a small platform for people to do that, whether that means being an empathetic listener, driving the van, or donating a few dollars,” Marchesi explained.

For the cofounders, connecting friends back into the community through “awesome conversation” is key.

Speaking at a customer panel at Cisco Live 2018, the pair explained that the idea was born out of the volunteer work they had done at school, feeding people who are homeless.

“I remember meeting this gentleman, Harry, an older guy, a big fella. After chatting to him for a while I realised he was just like my uncle, just like my dad, just like my grandad, but living on the streets,” Patchett said.

“Being 15, that really impacted me, going out just a kilometre away from our school and seeing people sleeping in the park. That really stuck with both Nic and I throughout high school.”

Upon leaving school Patchett went off to uni and Marchesi began to work, but they both found they missed the experience of volunteering, and soon enough they had installed a washer and a dryer in a van and were hitting the streets of Brisbane.

While the idea of washing and drying clothes seems relatively simple – even if it is being done from the back of a van – the Orange Sky operation is anything but: make no mistake, this is a tech-heavy operation.

First, there’s the actual fit out of the vans, and the operating of the washing machines and dryers themselves. Having started out, ahem, ‘borrowing’ water from the council to actually wash the clothes, the cofounders soon realised there was more to bringing their vision to life than met the eye.

Over the years, the Orange Sky team has worked to optimise the vans to ensure as much as possible can be automated, right down to the replacing of detergent.

Powered by Cisco Meraki solutions which are managed from the cloud to keep everyone online and connected, every move the vans make, no matter where they are around the country, is guided and in turn monitored back at Orange Sky’s Queensland headquarters.

With system administrators given easy access to reporting and insights through user-friendly dashboards to ensure full visibility across their organisations, the data collected through Cisco Cloud-managed solutions is vital to Orange Sky. It helps the organisation make better decisions around where to send its vans on any given night so they can help as many friends as possible.

An internal app for staff also keeps volunteers abreast of scheduling and any news, and in turn they can easily communicate with HQ should any issues arise. Volunteers are also encouraged to share their ideas about what is working, what isn’t, and what could be done better with HQ at any time.

The app is also used to keep track of whose washing is in the machines at any given time and who is next in line, while the vans also provide free WiFi to friends.

Cisco has worked closely with Orange Sky to develop a tailored tech solution to ensure its vans are kept running all across the country, with this part of Cisco’s shift in focus beyond the enterprise market.

To better cater to smaller organisations, Cisco has worked hand in hand with customers to develop Cisco Start, a suite of end-to-end, enterprise-level solutions tailor-made for this market, with the solutions set at prices that are realistic for small businesses.

With a report from IDC finding the top three business priorities for SMBs are to reduce costs, gain operational efficiency, and improve productivity, the shift in focus for Cisco comes as the SMB market grows increasingly sophisticated in terms of its demands for tech to help them meet their business priorities.

While the Orange Sky cofounders would never have thought when starting out that they would be hiring software developers and paying such close attention to their tech, they know now it’s all part and parcel of running an organisation in this day and age.

“We’re lucky though, at Orange Sky, people are attracted to working with us not because of the salary or the desire to work for a multinational software company – they come to Orange Sky because they’re excited to help people.”