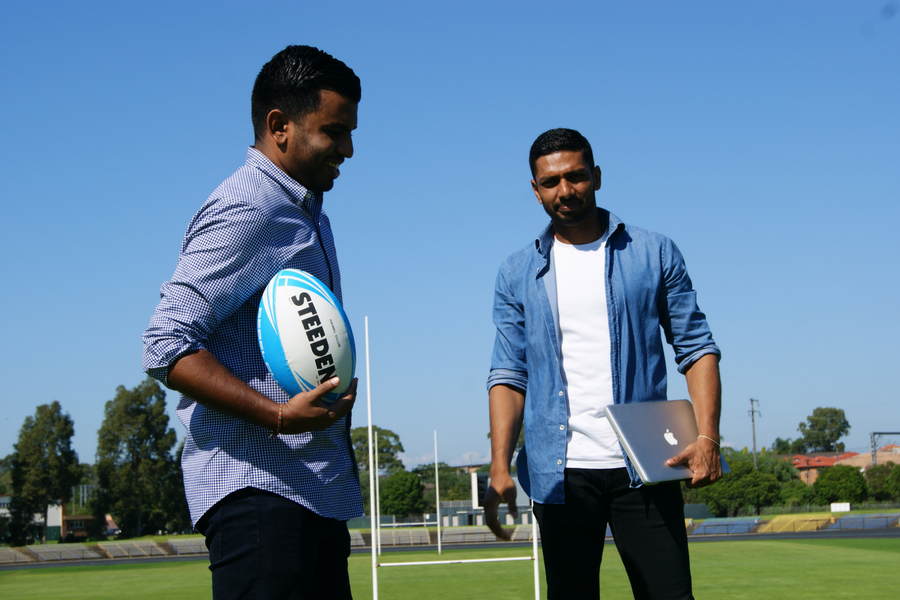 In the 15 years since Moneyball was published, much of the team sports world has changed the way it looks at and talks about athletes and their performance. Advanced stats now influence the way players are signed and teams fielded, with the numbers also making their way into television broadcasts and newspaper game reports.

For fans of Australia’s National Rugby League (NRL), however, it can seem that the league is still for the most part stuck on selection by gut feeling (or whoever the coach isn’t feuding with this week).

Aiming to bring advanced analytics to the fore in the NRL is LeverEdge Sports, founded by Prad Navaratnam and Sen Thevarajah, which is looking to help teams make sense of the mountains of performance data they collect.

“In rugby league, we do this by taking the raw data that teams receive on their players’ performance and analysing into a second tier level of data which in turn helps calculate an Impakt Score. The Impakt Score is calculated using a specifically-created algorithm which is built according to each playing position,” Navaratnam explained.

“This helps teams and coaches put a ‘magic number’ on every player’s performance and brings everyone to an even playing field. It takes all the media noise out of player performances and judges players across every critical metric based on their playing position.”

Like many a project these days focused around data analytics in sports, LeverEdge too was inspired by Moneyball, with Navaratnam and Thevarajah wondering if they could apply a similar methodology to other sports to see how true all the noise around player performances is.

“Our background is in banking and investments, and we used our experience to then start modelling algorithms based on the investment world, except in the world of rugby league,” Navaratnam said.

“When we started to test these algorithms out over a season of NRL, it started to spit out some interesting results that showed players that were not getting noticed by the media but were performing a lot better than those that were getting noticed.”

Not being from a professional rugby league background, however, came with its own challenges, however Navaratnam believes the results being delivered by the product began opening doors.

“The system is best used on a comparative basis, where players and coaches are able to compare any individual player to some of the best in the comp in that particular position. This helps identify where each player must improve or maintain,” Navaratnam said.

Navaratnam further explained that each algorithm is customisable, allowing teams to adjust how they want to measure their players.

“This has helped build that trust with our clients and they feel comfortable that they are able to measure the players how they would like, yet at the same time leverage off our intellectual property and technology to help them get to where they want faster and more smarter,” he said.

“Every coach and every team does things differently, so it was important that we remained flexible enough to meet our clubs’ requirements but also not too flexible that we simply became a software company building a platform for every club.”

The pitch to get clients on board is “fairly simple”, Navaratnam said, focusing on how the startup’s aim to help clubs make better use of the mountains of data they collect by making sense of it for them.

A similar point was brought up by William Strange, founder of Melbourne sportstech startup Sports Performance Tracking, which pairs a wearable device with an analytics platform to help athletes and clubs make sense of their performances.

Though he had first targeted the amateur market, Strange found a space with the pros as, he said, a lot of clubs don’t actually have the expertise in sports science or analytics required to understand all the data being generated.

“One of the biggest problems with the modern day technology is that it creates so much data that no one knows how to understand it, and it’s almost more important to understand the data, or five percent of the data, than to have 100 percent and not understand any of it,” he said.

Looking at the sportstech landscape across Australia and the companies such as Sports Performance Tracking and Catapult Sports doing the wearables and the analytics, Navaratnam believes LeverEdge’s closest competitors still come in the form of the teams themselves.

“There are some teams that prefer to do what we do in-house, simply because of the ‘trust’ factor of us not coming from a rugby league background,” he explained.

Of course, the startup’s work can also be applied to other sports, with each sport to be treated as its own “product universe”.

“Within each universe comes its own requirements and as such requires to break down the sport further to ensure we are able to get it to a stage where we are able to then re-construct our own product using everything that is important,” Navaratnam said.

“It is pretty important to know the sport inside out. This is where being a sports junkie like us and watching those countless hours of sports is a benefit. Knowing the sport, knowing what makes a successful team and player in that sport and then breaking it down further to knowing how to be successful is the key.”

Once that’s done, Navaratnam said, the technology can built around that.

Over the coming months, the startup will look to secure seed funding to help further develop its existing offerings, as well as new products, while also looking to new markets.