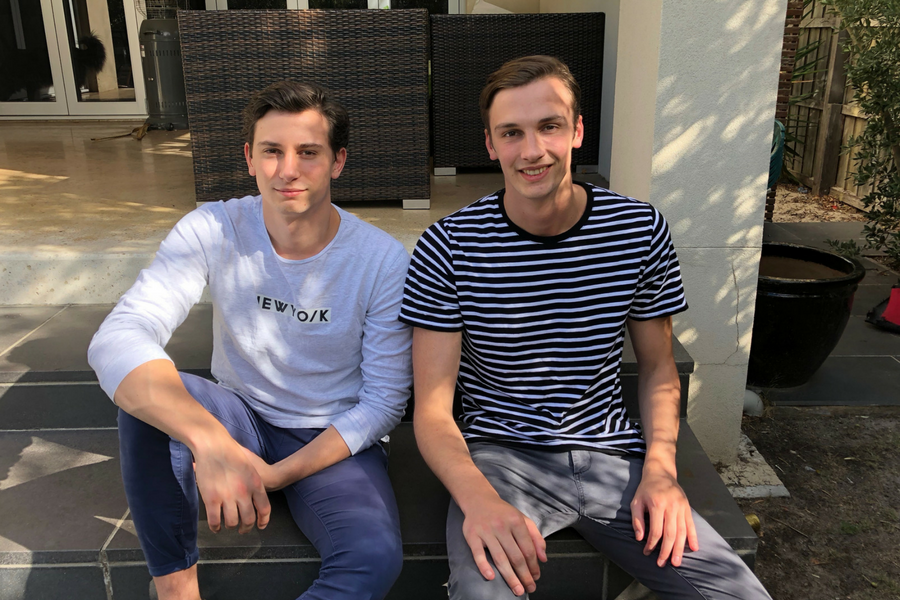 Hypnotism in popular culture perhaps isn’t always portrayed in the best light, but Melbourne brothers Chris and Alex Naoumidis are determined to highlight the benefits of the practice and bring it into the mainstream with their app Mindset.

As Chris explained it, Mindset is a hypnosis app that aims to help “retrain the thought patterns undermining your self-improvement”.

“We designed Mindset because we hate the idea that people everywhere, ourselves included, have a distinct gap between how we are, and how we wish we were. Everyone has areas of themselves they’d like to change, yet we struggle to succeed in changing them for the better,” Chris said.

The brothers came up with the idea after exploring hypnosis as a way to stop biting their fingernails.

“We were initially pretty sceptical about it but decided to give it a shot and were amazed when, after to listening to one low-quality hypnosis Youtube video, we stopped biting our fingernails almost instantly. We thought it was incredible and started to look deeper into the science. We then realised it was actually legitimate scientific phenomena, not the mind control for magicians we had initially believed,” he said.

“We thought it had massive potential in the area that we were really passionate about, self growth and improvement, but couldn’t find anything that could help. The apps that were out there were clunky and unintuitive, and a session with a hypnotherapist would cost hundreds of dollars each time. So we decided to make something ourselves.”

The pair soon got to work building an MVP aimed at testing what kinds of areas of self improvement users wanted to explore. The result was BetterMind, an app which looked at a variety of hypnosis sessions, through which Chris said the cofounders found users weren’t that interested in changing bad habits, but rather, wanted to focus on self development, from getting better sleep to being more productive and motivated.

Along with all the usual challenges that come with developing an app, Chris said the startup has come up against a stigma towards hypnosis.

“[People think] it is just stage hypnotists making you cluck like a chicken. The misconceptions surrounding hypnosis makes it difficult to encourage users to give it a try but that’s why it is such a massive opportunity if we get it right,” Chris said.

According to Chris, Mindset uses “deep-relaxation hypnosis”, which brings a person into a “highly relaxed state of inner concentration and focused attention where they are more open to suggestions” and cited a Stanford study that found distinct sections of the brain have altered activity and connectivity while someone is hypnotised.

David Spiegel, the senior author of the study and professor and associate chair of psychiatry and behavioural sciences at the university, said of the results, “Now that we know which brain regions are involved, we may be able to use this knowledge to alter someone’s capacity to be hypnotized or the effectiveness of hypnosis for problems like pain control.

“Hypnosis is the oldest Western form of psychotherapy, but it’s been tarred with the brush of dangling watches and purple capes. In fact, it’s a very powerful means of changing the way we use our minds to control perception and our bodies.”

To give people the chance to try it and make up their own minds, new users joining Mindset are given access to a free seven day ‘Foundation’ pack, which Chris explained provides an introduction to hypnosis, and an overview of some of the topics available.

“Each session is a hypnosis audio track, which uses deep-relaxation language techniques to induce them into a state of hyper-attention and then provide suggestions that help change their behaviour,” he said.

Once they have completed this pack, users can subscribe to unlock the other tracks available, from more than 50 hypnosis sessions to sleep tracks, with this priced at $9.99 per month or $89.99 yearly after a free month’s trial. These are grouped into themes which target specific areas of self improvement, Chris said, approaching the topic from different points “to provide well-rounded growth”.

“The hypnosis sessions found in Mindset use attention, language, and context in order to influence user’s attitudes and perceptions, leading to long-term behaviour change,” he said.

Mindset’s recordings have been sourced from a UK company run by two hypnotherapists.

“We are planning to bring the pack development inhouse in the future so we can provide personalised sessions for each user,” Chris said.

“There are many different types of hypnotic inductions, and users may find some more effective than others. So, our end goal is to use machine learning along with different inductions and suggestions to personalise each session to best hypnotise each individual user.”

The app takes requests from users around which topics they would like to see in new packs.

As Chris explained, Mindset’s target market are 18 to 30 year olds who may have tried meditation and “strive for self improvement”.

The app has brought users on through various channels, including Product Hunt, where it was for a time listed in the top 10 startups, reddit, and Hacker News.

Chris acknowledged Mindset has a number of competitors, from hypnotherapists themselves – which can cost hundreds per appointment – to other hypnosis apps and apps focused on various areas of self-improvement.

“The difference between Mindset and these other products is that instead of attempting to change the behaviour directly, like they do, our app targets the root cause of the behaviour leading to faster and more long-term change,” he said.

The brothers have been supported in their startup journey by the Generator Accelerator program at Monash University, which they both attended. They entered the program with a peer-to-peer dress rental app called Covet, however advice from the team, Chris said, led the brothers to stop work on Covet.

“Some of this advice helped us make the tough, but necessary, decision to stop working on Covet and focus on working on ideas that we both have a deep passion for and that users truly need. If we didn’t go through the program I believe we would of kept limping along and not have been able to create Mindset,” Chris said.

As they look to grow the app, Chris said he and Alex are focused on their main mission of bringing hypnosis to the mainstream.

“Less than a decade ago meditation was viewed the same as hypnosis, alternative science for hippies and monks. Over the next year we will make significant inroads in bring hypnosis to the mainstream, just as Headspace did for meditation.”