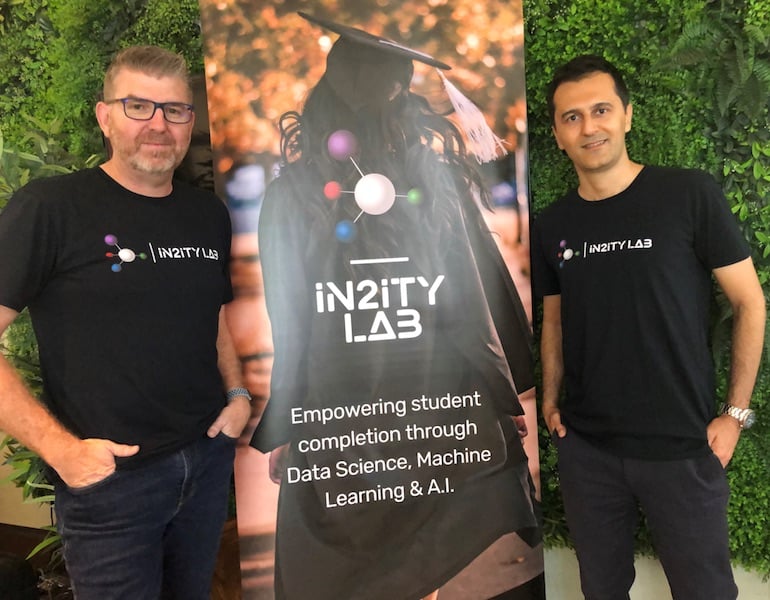 With a background in education and technology, qualified teacher Greg Higgins realised this was a growing issue and in the process, is costing institutions and students billions of dollars each year.

“After spending so long in education and technology it’s clear there’s a universal problem around student attrition,” he said.

Higgins says the issue of students struggling with their studies has been compounded in recent years with COVID.

“Prior to COVID, non-completion, which is first-year bachelor students that don’t go into second and third year, was costing Australian universities over a billion dollars, in unrealised revenue or enrolment revenue,” he said.

“When COVID came around and universities moved online, failure rates also increased by as much as 30% as students became invisible and learning became a lot harder. We have this perfect storm of more students online, more students failing and more students becoming invisible. Higher education around the world is bleeding billions of dollars because of this.”

iN2iTY LAB also helps universities and other institutions predict which students would be at most risk of dropping out of their courses.

“Our platform will look at the first step of identifying and understanding the contributing factors of a student that is not going to complete,” Higgins said.

“It’s predictive modelling and looking for patterns of things like behaviours that students did or didn’t do and using machine learning, to determine whether that group of factors was the cause of the student not completing.

“With our current testing student data set, from Open Universities in the United Kingdom, we’re already running at an accuracy of around 83%, in determining whether a student will complete or not.

“Our platform, called “DEEPTRACE”, once deployed, will tell us, that these are the students that you might want to pay attention to because whatever they’re doing, previous students did the same thing and they ended up not completing their course.”

Higgins says their DEEPTRACE platform will make it a lot easier for the institution to identify who they need to support and take the appropriate actions to help.

“Once they’ve determined who to support, the platform will then monitor how effective that support is in terms of costs and impact on whether those students are succeeding,” he said.

One observation that Higgins has made, in early engagement with a broad range of universities, has been the fact that many institutions are already running some analysis on their student retention.

“Many universities are taking a big data approach already, but they’re all at different levels of maturity and complexity,” he says. “When you start talking to a university it’s not uncommon to hear that they are already doing some predictive modelling.

“While there are some smart people doing some amazing things, it can often be very silo-based. So what we’re doing is determining which universities are doing what and then finding how we can partner with them to achieve the best outcome… and ensure that they can take an organisational-wide approach to solving this problem.

“Given our backgrounds, we understand the path to get there. We are not trying to stop these institutions, our goal is to help, enable and really super-charge what they’re doing in terms of productisation so everyone in the institution can benefit.”

iN2iTY LAB has secured investment and backing from global early-stage VC, Antler, and Higgins believes it was incredibly valuable given how small the EdTech space is.

“Antler’s been great as they’ve really helped equip us with the tools to deeply understand and validate the problem. When you’re so close to something you often can’t see the wood from the trees,” he said.

“The Antler cohort really helped us determine and benchmark the product / solution fit, and how to find a unique yet highly scalable solution to the attrition problem.”

Going forward, Higgins hopes to take their platform to universities around the world.

“In five years’ time, we see ourselves being one of the leading providers of data science and machine learning in education,” he said.

“While we’re aiming to be one of the leaders in the field internationally, we know that it starts with small steps and continual learning and progression.”

Previous article CRYPTOPIA: Australian government unveils major payments reforms to embrace cryptocurrencies and digital assets
Next article Why you should never agree to coffee with a stranger until they’ve told you what they hope to get out of it
Via Antler Australia
Tags Antleredutech