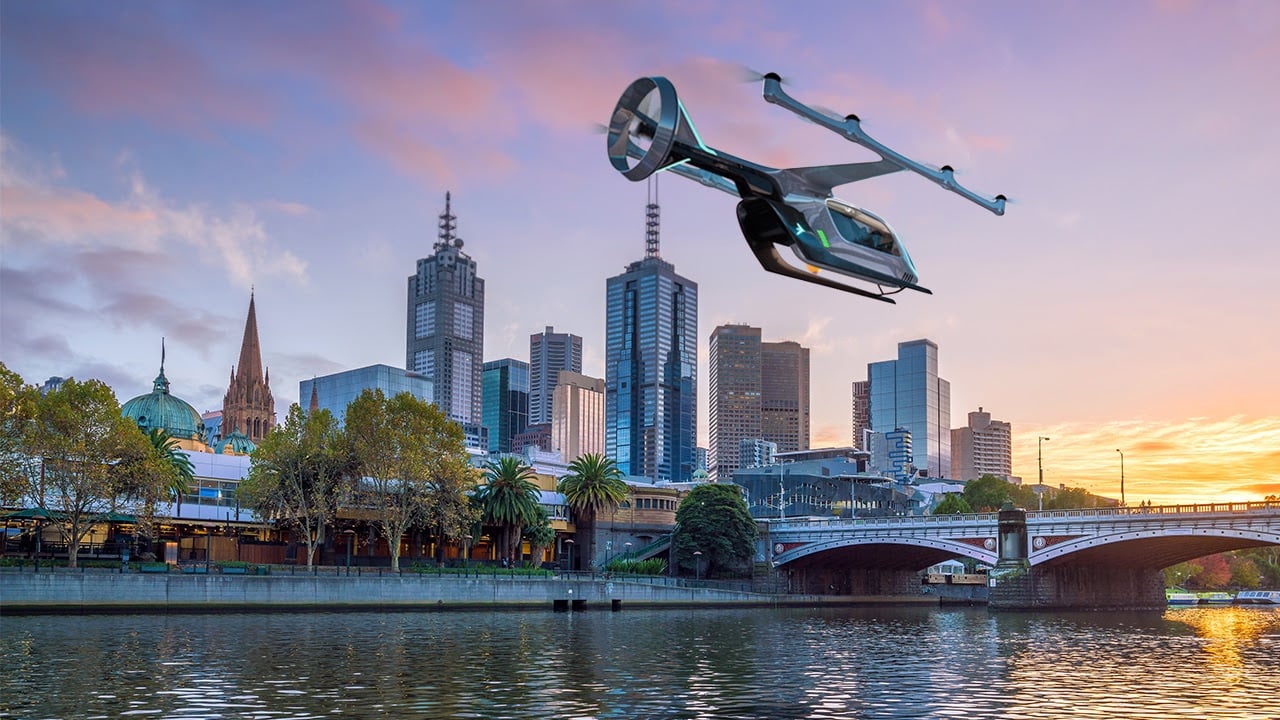 US ridesharing giant Uber has chosen Melbourne as the first international site to trial its electric helicopter Uber Air.

The Victorian capital joins Dallas and Los Angeles as pilot cities for the program. Test flights are due to get underway from 2020 with the goal of commercial flights from 2023.

Uber’s Australian, New Zealand and North Asian regional GM, Susan Anderson, revealed Melbourne was the tech company’s third site to develop the flying taxis at a summit for Uber Elevate in Washington DC today, saying the Victorian government had been “highly supportive” of the proposal.

“We look forward to partnering with them to progress into this first international trial for Uber Air in Melbourne,” she said.

“Australian governments have adopted a forward-looking approach to ridesharing and future transport technology. This, coupled with Melbourne’s unique demographic and geospatial factors, and culture of innovation and technology, makes Melbourne the perfect third launch city for Uber Air. We will see other Australian cities following soon after.”

The state’s Assistant Treasurer, Robin Scott, was also in Washington for Uber Elevate and spoke at the summit.

Uber is also partnering with Melbourne Airport, Macquarie Capital, Telstra and Westfield’s shopping centre business, Scentre Group, to develop the infrastructure and telecommunications needed to roll out the service, which could potentially get people from the CBD to the Tullamarine airport in 10 minutes.

Uber’s goal is to price the flights at around the same cost as an Uber X.

The airport’s chief of parking and ground access, Lorie Argus, sees “fantastic potential for Uber Air” as a link for plane passengers.

Macquarie’s global head of energy technology, Greg Callman, said the business will work with Uber Elevate “on the development and electrification of the skyports that will support vertical takeoff and landing, as well as determining the best market structures and models for this infrastructure” .

“We look forward to leveraging our expertise in infrastructure, charging, and energy, along with innovation driven by Uber and other partners to accelerate the move toward electric air mobility,” he said.

The challenge for rolling out the Jetsons-like service in just four years is finding appropriate landing spots at regular intervals in the city to make it viable and competitive with ground transport. Rooftop carparks in shopping centres are seen as one option.

Scentre Group’s chief strategy and business development officer, Cynthia Whelan, said Uber’s decision to work with her company  recognised the strategic locations of our Westfield centres and their close proximity to customers, communities and transport hubs.

A spokesperson for the regulatory body said: “CASA is looking forward to meeting the safety and regulatory challenges of this project. There will many new safety issues to examine and we are up for it.  We will make sure all safety issues are identified and addressed before this new service takes to the skies.”

Whether the dream becomes a reality for the ridesharing business, which is currently facing a class action for damages from the taxi industry in Australia, or remains pie-in-the-sky, Uber’s ambitions are up there with Elon Musk’s and Richard Branson’s.

At today’s announcement, the company said it need “a wholly new kind of aircraft that can scale in cities” that’s green, quiet and safe.

The short-range VTOL (vertical take off/land) air taxis are likely to look like the love child of an oversized drone and a helicopter, and several different designs featured it today’s images for the media. The company has specified that they needs to be 32 times less noisy than current helicopters.

One of Uber’s potential Air drones

Of course the public has to embrace the radical design, without a pilot and the fact that they’re electric. Uber stressed that they’ll be so safe that even if two rotors fail, it can still land safely, but in the wake of recent troubles with the technology behind the Boeing 737 Max, and other tech failures where pilots intervened to save the lives of the passengers and crew after computer failures, as well as autonomous cars still appearing to be a long way off, the 2023 deadline seems optimistic.

Dr Matthew Marino, an aerospace engineer and co-leader of RMIT’s Unmanned Aircraft Systems Research Team, says the technology for autonomous aerial transport already exists and the skies could be much safer than back on earth.

“Allowing a computer to fly an aircraft, rather than a human, is nothing new,” he said.

“Technology has progressed so much that aerial autonomy is considered safe and reliable, arguably more so than driverless cars. While a driverless car would be faced with obstacles on the road like pedestrians on their mobile phones or other vehicles like trams and buses, aerial autonomous vehicles don’t have these obstructions.”

Safety remains the biggest problem however for passenger drones.

“CASA has been very progressive trialling drone technology and there are a number of drone trials happening in suburban Australia including Google’s Project Wing to deliver food, drinks and medication,” Dr Marino said.

“But we need to prove to people that this technology can be as safe as helicopters, which regularly fly in our cities. More research and development are needed in this area.”

His colleague Dr Chris De Gruyter, Research Fellow in RMIT’s Centre for Urban Research, believes the bigger challenge is the market for Uber Air, despite promising to be as cheap as a car, because for all the movement in a city of 5 million, most of the trips are pretty short.

“Based on what travel survey data tells us, we might see skyports at key activity centres and employment hubs like the airport, Melbourne CBD and other key precincts like Clayton or Dandenong.”

Perhaps the drones will replace the long-awaited rail link to Tullarmarine before it’s even built, but they won’t deliver the utopia Uber paints in its marketing of the idea according to De Gruyter. For starters, the sky could be full of ‘empty running’ as it heads somewhere to pick up passengers.

“These vehicles are very low capacity – similar to what a car could carry – while there are also questions about if these vehicles will create visual clutter in the sky and how environmentally-friendly they are.” 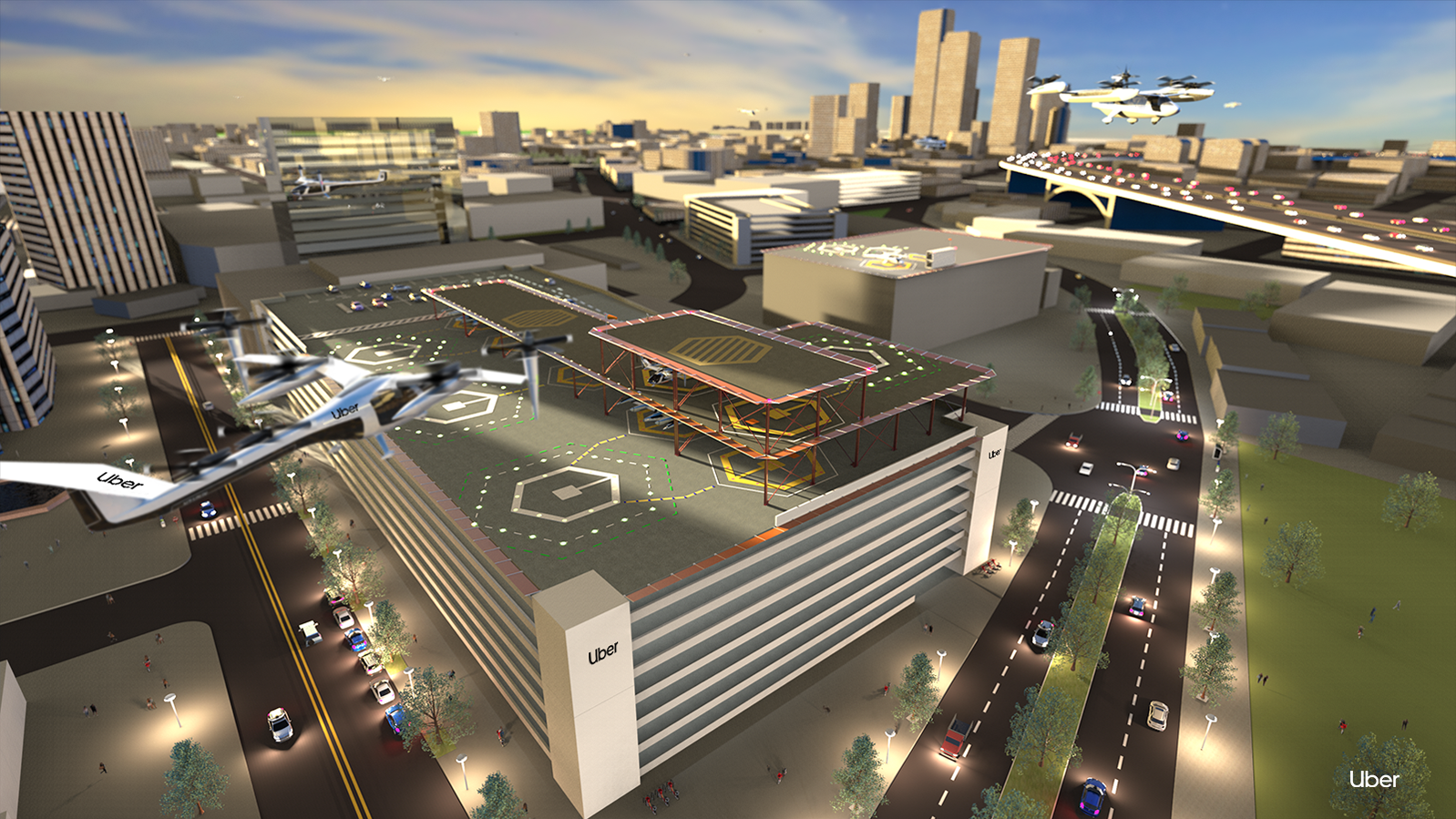 An artist’s impression of an Uber Skyport. Source: supplied