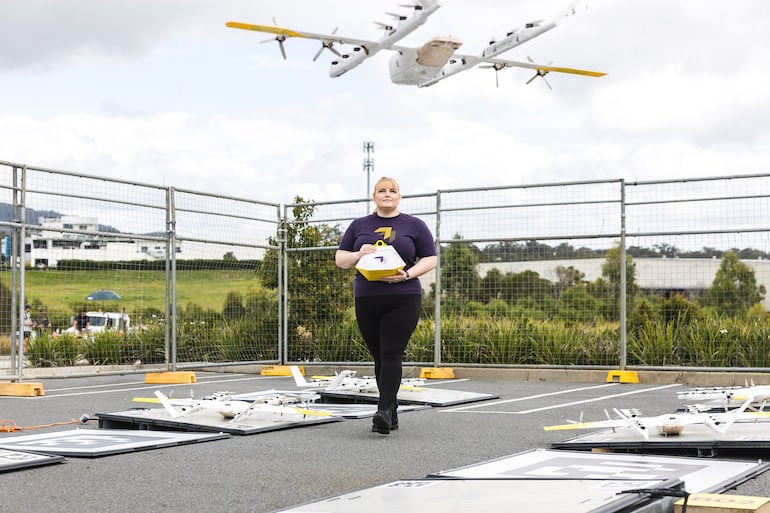 In early November, the Commonwealth Department of Infrastructure invited public comment on proposed Australia-wide “drone delivery guidelines” it has been quietly developing with industry stakeholders.

A slick new website – drones.gov.au – boasts of the supposed benefits of delivery drones. It claims they will create jobs, provide cost-efficiency and be environmentally sustainable.

The draft guidelines focus on minimal technical considerations concerning land-use planning (suggesting no special accommodations need to be made for drones), and safety and noise issues. These issues matter, but they entirely overlook the stakes of permitting delivery drones to dominate our skies.

Then there’s the question of whether the purported benefits stand up to scrutiny. Our team at the University of Western Australia’s Minderoo Tech & Policy Lab has stress-tested the claims made in the department’s guidelines. This is what you need to know.

Delivery drone networks would be a huge deal

Drones hold a lot of promise in being able to substitute humans in dangerous or otherwise difficult (but important) work, such as emergency relief, aerial mustering and shark patrol. Commercial delivery drones, however, are an entirely different proposition.

The key player behind them is Wing Aviation, a subsidiary of Google’s holding company Alphabet Inc. Wing has selected Australia as its lead test-site for on-demand deliveries of coffee, roast chicken, Coke and chips. This is a public health and environmental catastrophe waiting to happen – not to mention a visceral (even violent) imposition on public space.

Wing has operated in select parts of the ACT since September 2017 and in Logan, Queensland, since September 2019. Despite subsidising every aspect of the operations, creating zero cost for both merchants and consumers, it has not escaped complaints. Concerns have ranged from noise and safety complaints, to impacts on wildlife, pets and privacy.

Wing had to cease operations in Bonython after extensive protest from residents. Residents in Logan have reported being unsettled by neighbours receiving up to eight noisy deliveries per hour.

Cities around the world are seeking alternatives to freeways – acknowledging how road infrastructure contributes to social inequality, pollution and reduced quality of life. Do we want to replicate these problems in our skies?

The benefits of delivery drones are unproven

The guidelines emphasise the economic and eco-promise of a drone-filled future. A projected A$14.5 billion added to Australia’s GDP and 10,000 jobs over the next 20 years is undeniably attractive. But does the evidence add up to this rosy vision?

The numbers cited in the guidelines actually come from an October 2020 report prepared by Deloitte Access Economics for the Department of Infrastructure.

Crucially, the report aggregates multiple markets for drone use, well beyond just delivery. In the Deloitte report, the segment of the drone market for military and industrial applications is estimated to grow to more than $5.5 billion, while the food delivery market, at $0.26 billion, is at best 20 times smaller. It appears military and industrial applications drive the bold economic estimates found in the guidelines – yet the department doesn’t mention them.

Also, the 2020 report caveats if its predictions of market expansion change, so too will its economic analysis. Australia’s highest inflation rate in more than 30 years, coupled with a global economic slowdown, and worsening business confidence suggests Deloitte’s predictions are perhaps on shaky grounds.

The fragility of the economic promise is matched by equally shallow claims of environmental sustainability. There is a shrewd focus on “last-mile delivery emissions” to demonstrate drones’ green credentials. But this ignores the emissions generated along the entire logistics chain of this complex, technology-heavy system.

There are compounding emissions created by additional warehousing and the power needs of drones – and that’s before we even consider the explosion in single-use packaging, as reusable coffee cups and containers languish at the back of the cupboard.

Drones of indulgence, not necessity

The guidelines state drones deliver “on-demand supplies”. This raises the question: demanded by whom? Barely a fortnight ago Deliveroo went into voluntary administration in Australia, citing “challenging economic conditions”.

“On-demand supplies” is a loaded description that conflates necessity with desire – blurring essential medication with donuts. This descriptive sleight of hand casts drones as an all-or-nothing offering, which is of course untrue.

One can support Australia’s only other approved delivery drone operator, the regional medical supplier Swoop Aero, without having to tolerate repeat junk-food deliveries whizzing by to the neighbours down the street.

Citizen approval should be essential

In 2002, Australia became the first country to regulate civilian drone use. The intervening 20 years have afforded the drone industry multiple opportunities to influence the regulatory process, mostly beyond the public eye. Delivery drones necessitate an entirely different conversation.

In 2019, some unsuspecting Canberrans only discovered they were guinea pigs in a food delivery drone trial when the drones began to appear on their neighbour’s doorsteps. They then found out the company responsible, Google Wing, also runs the public feedback process on behalf of the government. Such events do not deliver the transparency and impartiality demanded of government decision-making.

Drones demand an open and expansive discussion about the vital, living habitat above our heads. We must resist empty promises and indulgence, and centre the much broader needs of all living things.

Google has an ambition to use Australia as its laboratory to develop the future of drone deliveries, before exporting it abroad. Australians have a chance to turn this plan on its head. Submissions for feedback on the draft guidelines closed on December 2. You can now have your say here.