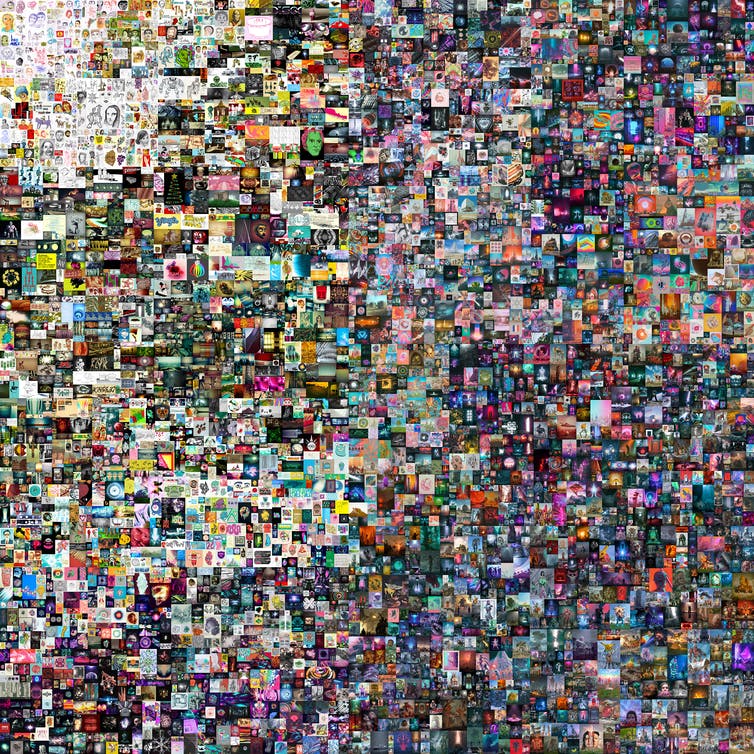 Everydays: The First 5000 Days, by Beeple, an NFT artwork that sold last week for US$69 million.

Happy Tuesday all. Here’s some news that caught our eye.

Well it didn’t take long for the scammer to move into the dumpster fire that is non-fungible token (NFT) art.

Artists are reporting that their works are now selling for more as a digital NFT, than the stick-in-on-the-wall-enjoy originals.

But the ABC reports that a new problem has emerged with artists globally reporting that their works have been “stolen”, with an automated NFT tweet-minting bot with the name @tokenizedtweets among the prime suspects. Anyone can get the bot to do it and it turns the tweet (with the link to the artwork) into a token.

Aside from that low-level scam, artists are discovering their works have been sold as NFTs without their knowledge or permission.

And even Captain Kirk is concerned.

So @Jack & @TwitterSafety @TwitterSupport I am very concerned about these @tokenizedtweets stealing content, images I upload and my tweets which are all under my copyright being tokenized and sold without permission. Authors, actors, models photographers, etc..should be concerned

After weeks of argy bargy between the local media roosters and Planet Zuck in the wake of the Australian government passing the news media bargaining code into law, News Corp announced today that it’s struck a multimillion dollar three-year deal with Facebook to share content from the likes of the Oz, its tabloids and even the freebie site news.com.au. The details were not revealed, but Sky News has also come to an arrangement with Facebook in a renewal of their existing vows to each other.

News boss Robert Thomson hailed it as “landmark in transforming the terms of trade for journalism”.

Google’s submission to have a US$5 billion class action lawsuit thrown out was rejected by a Californian District Court judge last Friday and will go to trial.

The legal action accuses Google of running a “pervasive data tracking business” that can’t avoided, even in private mode. The complaint was lodged by three people last June. Google denies the allegations

Judge Lucy Koh ruled, in dismissing the company’s application that it “did not notify users that Google engages in the alleged data collection while the user is in private browsing mode.”

Fintech platform SendGold has rebranded as Rush Gold, launched a digital branded Mastercard in a partnership with Brisbane payments technology company EML Payments, which means customers can pay for things on the card using gold in real time.

Australian customers can now pay directly with gold, converting it to any currency at point of sale.

Originally launched in 2016, Rush Gold is now available in 13 countries and says it has grown 36% per month since last year, with a strong pipeline of “Gold-as-a-Service” partner deals in progress across ASEAN, the Middle East and Africa.

If you’ve not heard of Zeller, that’s mainly because it’s not done anything yet, except raise more than $31 million from investors.

Billed as an “integrated payments and financial services solution”, the company’s PR makes it sound very cloak and dagger, waiting three months to announce today that it “discreetly raised” a $25m Series A last year (“And the best indiscrete raise of 2020 goes to…”), after “coming out of stealth in July”.

The cash is to “to accelerate product development and engineering capabilities, whilst also investing heavily in growth; bolstering its marketing and sales function, as well as building a local customer success team to help service and support Australian merchants”.

The company says its first product is “imminent”.

The Melbourne fintech previously raised a $6.3m seed round in June 2020.

How would you change the world with #STEM? Imagine your ‘Future You’ and enter the competition!

Kids aged 8-12 could win a STEM prize pack and have their character featured on the Future You website! Enter here https://t.co/csmJd1wSvd#FutureYouSTEM pic.twitter.com/452jezFKPk