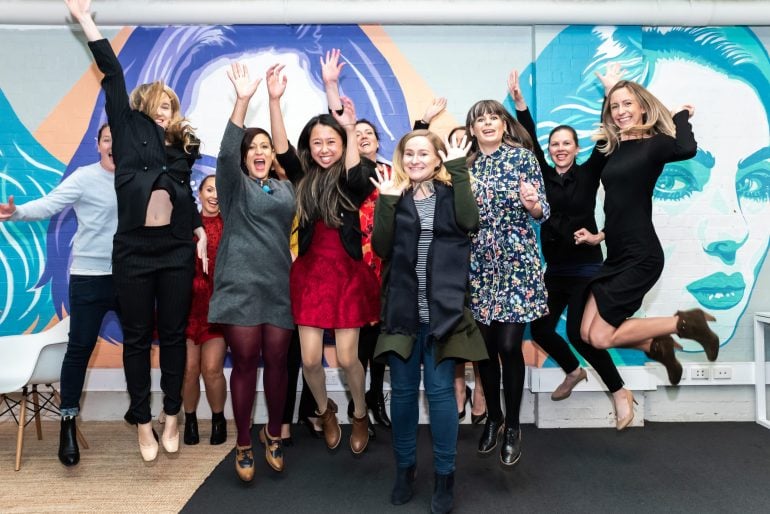 Atto founder Kate Kendall (front, in green) and members of the 2021 cohort

You can read about Atto’s year in review here.

But to round out the year, after its latest cohort of 10 startups emerged from the program, founder Kate Kendell and her team jumped onto the hot new toy in tech, ChatGPT, to ask a few questions about women in tech.

If you’re not across it, think of ChatGTP, as Clubhouse with chatbots. OpenAI, the Silicon Valley venture cofounded by Elon Musk in 2015. Musk has since parted ways with the foundation, which CTO Greg Brockman, said at the time was created to “advance digital intelligence in the way that is most likely to benefit humanity”.

[Sidenote: On the weekend, OpenAI joined Musk’s long list of soured relationships, when he blocked its access to Twitter  tweeting that he’d “ just learned” the company was using Twitter’s database for “training”, adding that “OpenAI was started as open-source & non-profit. Neither are still true.”]

Last week OpenAi released ChatGPT (GPT stands for Generative Pre-Trained Transformer – text-generating AIs), which is designed to interact in a conversational way. It’s designed to answer followup questions, admit mistakes, challenge incorrect premises, and reject inappropriate requests. More than one million people jumped on to try it out in just a few days.

The Atto team did too, asking why female founders get less funding.

The answer, it seems, is obvious, even to the artificially intelligent, with ChatGPT replying that “women are frequently overlooked and undervalued by investors”, adding that the issue “addressed quickly in order to level the playing field for female entrepreneurs”.

Atto also asked about raising your first round , noting that “the advice wasn’t too bad. Generic but helpful”.

We’ve reproduced what the Atto team asked and ChatGPT’s responses below.

Why do female founders get less funding?

ChatGPT: Unfortunately, female founders often receive less funding than their male counterparts due to the gender bias that exists in the venture capital industry.

Women are frequently overlooked and undervalued by investors, making it harder for them to secure the necessary funding for their business.

Additionally, female founders may be less likely to take risks and be more conservative in their approach, which can be a deterrent for investors.

Ultimately, this gender bias in venture capital is an issue that needs to be addressed and addressed quickly in order to level the playing field for female entrepreneurs.

How do you raise your first round of funding?

ChatGPT: Raising your first round of funding can be a daunting task for many entrepreneurs, but there are some key steps you can take to increase your chances of success.

First, you should identify and target investors who are most likely to be interested in your business.

You should also create a comprehensive business plan and financial model to demonstrate the potential of your venture.

Additionally, you should build relationships with potential investors and be prepared to answer any questions they may have.

Finally, you should use your network to reach out to potential investors and secure meetings.

By following these steps, you can increase your chances of raising your first round of funding.