What Australia needs to do to keep its quantum advantage 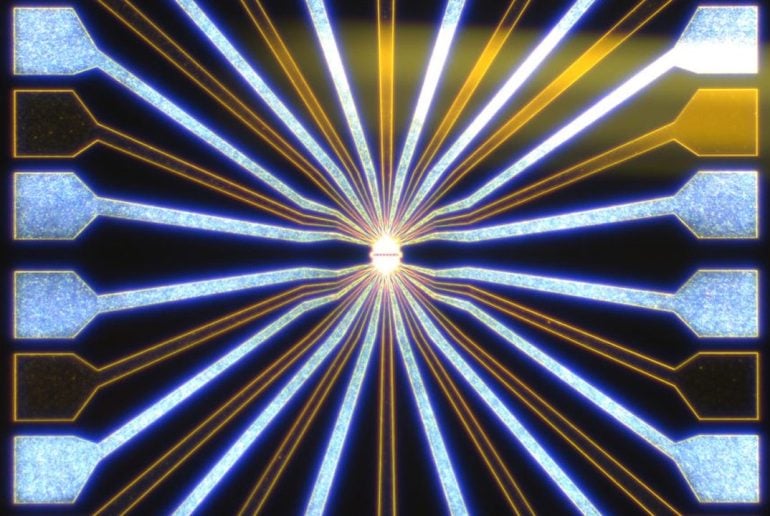 Interest in quantum computers is taking off as governments and big business look for ways to gain a competitive edge through cutting edge technology.

In this three-part series, we look at how quantum computers work, their applications, and the continued role Australian scientists and engineers play in the technology’s development.

Australia led the early charge in quantum research and has since established an ecosystem of quantum technology experts that is the envy of the world.

But now there are concerns that the government’s failure to adequately capitalise on that expertise is going to waste.

Simon Devitt is a Senior Lecturer at the University of Technology Sydney’s Centre for Quantum Software and Information.

Last year he co-wrote a report for the Australian Strategic Policy Institute (ASPI) outlining how Australia’s quantum advantage is slipping as federal support dries up and researchers head overseas.

“During the 2000s, Australia was one of the few countries that was very aggressive in funding universities for quantum technology development,” he said.

“We had huge interactions with American Defense and European investors as well.

“Consequently, we generated a huge amount of intellectual property which is why, when you look at the field now, you basically see Australians everywhere.”

Christian Weedbrook, from the University of Queensland, is CEO and founder of Canadian quantum startup Xanadu.

And Runyao Duan, who was the founding director of the University of Technology Sydney’s Centre for Quantum Software, is now directing the Quantum Computing Institute at Chinese tech company Baidu.

Of course, it’s not unusual for Australians to look for international opportunities, but Devitt is concerned about a quantum brain drain that he says has been accelerated by the pandemic.

“A few have been poached by Chinese corporates, three went to Amazon, another to Google, a couple to Microsoft, and other startups as well.

“I think it’s been around 15-16 nationwide in the same period.

“And these aren’t post-docs or students who have gone off – these are tenured academics who were running research groups.”

The reason why people are leaving is simple: money.

“Corporates are going around saying ‘well, that research is quite nice, I’m going to pick her up for $300,000’ which for the academic is good money but for these companies it’s like logging onto fiverr.com and offering $10 for someone to draw you a logo,” Devitt said.

“Government funding for Quantum Centres of Excellence has been drying up and we struggle to compete with the money thrown around by the big tech companies in the last five or six years.”

There was some movement late last year when the government announced $70 million in funding to help commercialise local quantum businesses.

And the NSW government has been proactive with the Quantum Terminal part of its Tech Central complex that will host local companies and the Sydney Quantum Academy.

But there are calls for the government to do more to recognise the value of Australia’s quantum research, to make Australia a place where talent wants to live and work, and to usher in the next generation of quantum computing experts.

“Considering what we did in the early 2000s, and how far we got in this area, it would be ridiculous to give away the store now,” Devitt said.

“If the government doesn’t step up and start a national initiative, this will all wither on the vine.”

For all the commercial, defence, and infrastructure value that quantum computing could bring, its development will also lead to greater understanding of the way the universe works and why.

Unfortunately, quantum physics carries a lot of baggage, in part because of the strange phenomena it entails like superpositions and entanglement, but also because theoretical physicists and philosophers have long questioned how exactly the universe can be probabilistic in nature.

One of the early explanations is known as the many worlds interpretation of quantum mechanics that explains away randomness in the universe by saying, in effect, that quantum events trigger a splitting of the universe such that each possible outcome happens in another universe.

David Deutsch was a pioneer of quantum computing when it was still a largely theoretical concept. In his 1997 book the Fabric of Reality, Deutsch assumes the ‘many worlds interpretation’ is true and suggests that quantum computers would be a way of interacting with these alternate realities.

“A quantum computer would be capable of distributing components of a complex task among vast numbers of parallel universes, and then sharing the results,” Deutsch wrote.

In the course of researching this series, we asked quantum experts about the ‘many worlds interpretation’ and if they thought they were communicating with parallel universes.

None were compelled by that idea.

One even quoted the dictum “shut up and calculate”, a phrase taught to quantum physics students to avoid them getting caught up in the implications of strange quantum effects.

That’s not to say there isn’t a kind of magic in quantum computing, but it is the magic of science, a pseudo-spiritual connection to the sublimity of the universe that comes from close study in all its forms.

We asked Professor Michelle Simmons what effects her deep understanding of quantum computing has had on her every day experience.

“Every atom counts, that’s my motto,” she said.

“One of the great results we got recently was we moved one atom one lattice location and could see the dramatic effect it has on the way things operate.

“With just one little tiny shift we can see an impact – so that basically means that everything matters, and we’re all connected.”

The quantum world is chaotic.

It’s underpinned by probability, by uncertainty, by mysterious phenomena that can’t yet be explained.

But through experimentation, the people who are working on the problem of quantum computing will find new paths forward for humankind.

“Fundamentally, if we can build a quantum computer, it will help us understand things that we’ve never understood before.”