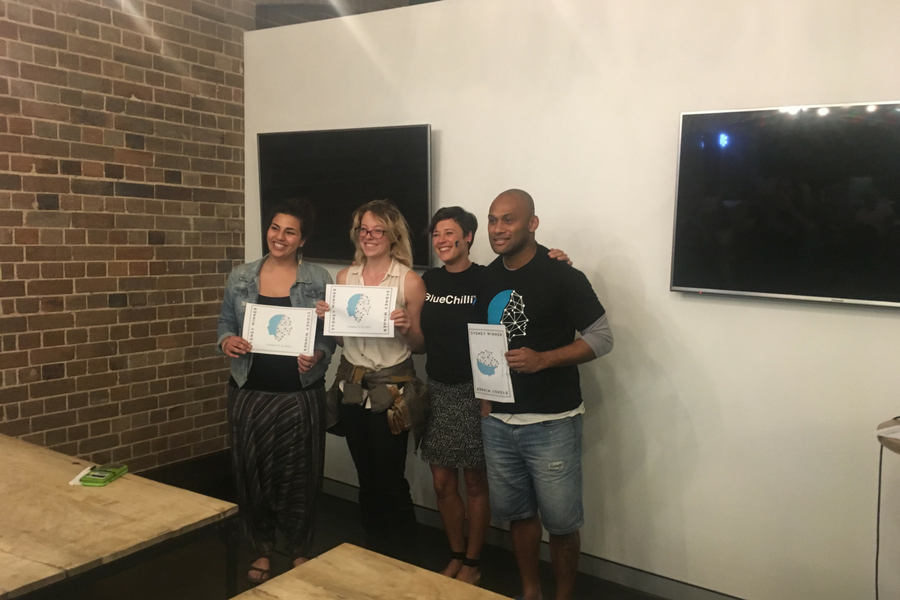 Social Qs, a team looking to help men understand and develop empathy for the lived experiences of women in the workplace through VR and gamification, took out first prize at the Australian leg of the LadyProblems hackathon over the weekend.

Held at BlueChilli as part of a global series being run by AngelHack across more than 20 global cities, the event saw over 30 men and women work across seven teams to solve key problems keeping women from entrepreneurship. LadyProblems asked hackers to work on one of four challenges, looking at the issues of either health, safety, economic empowerment, or safety.

Nicola Hazell, head of diversity and impact at BlueChilli, said the issues being discussed drew people from wildly different backgrounds into the room.

“There were a lot of first time hackathon attendees in the room, showing us that we can really expand the ecosystem by inviting people in and designing these opportunities for people to take part,” she said.

“It was really valuable that there were some men in the teams committed to the issues and bringing different values and perspectives to it. It was great to see the richness of diversity, people from different backgrounds, with different experiences and skillsets, uniting around the common cause we wanted to tackle.”

The Social Qs concept is a VR piece that looks to have men walk a mile in a woman’s shoes, so to speak, in the workplace. By being in the body of a woman it aims to have men feel firsthand what it is women go through, such as what it’s like to be sitting in a meeting and be spoken over.

Among the other teams pitching was SheMakes, which created a prototype of a jewellery making kit with electronics and 3D printed products – “we had people soldering at BlueChilli on a weekend, at a hackathon,” Hazell said – to help engage young girls in technology and engineering.

Also presented was Pep’d, a platform that analyses someone’s written conversations through their various social media channels to detect issues such as depression, anxiety, imposter syndrome, and other issues. Pep’d then advises on how to overcome these issues and identifies pathways to personal development.

As part of its prize, the Social Qs team won automatic entry into the top 20 of the upcoming SheStarts accelerator bootcamp, which will see 100 teams and entrepreneurs take part in workshops before the accelerator’s final intake is determined.

With the New Delhi edition of the hackathon also held this past weekend, the two events followed on from the New York hackathon held the week before. The New York event saw pitches ranging from a meal planning solution that aims to decrease the amount of planning time and, in turn, support better work life balance, and a Tinder-like platform matching female founders with the right angel investors and mentors.

To further add to the buzz around women in tech this weekend was the first Vogue Codes event, a series of panels and workshops put together by Vogue Australia magazine to showcase the experiences of female entrepreneurs and encourage more young girls and women to get involved.

Vogue Australia’s editor in chief Edwina McCann said of the event, “We have the ability to demystify technology, making a career in technology not only a natural choice for women, but a fashionable one.”