More than 1 million Victorians will no longer be heading to work, with around 500,000 being stood down as retailers, factories and corporates are forced to close in a bid to reduce coronavirus infections in the state.

Victorian Premier Daniel Andrews also announced on Monday afternoon that the number of people allowed to work in other sectors that can continue to operate, including construction and food services, will be drastically reduced in a bit to reduce the risk of infection.

But other retailers will close for six weeks from Wednesday, August 5 at 11.59pm, including hairdressers, manufacturers and administrative firms, such as call centres.

Some retailers can open, but only for contactless ‘click and collect’ or delivery. Hardware, building and gardening stores can stay open, but for tradespeople only.

Other sites, included construction, meat processing and distribution, can stay open but need to drastically reduce the number of people on site.

Warehousing and distribution centres in Melbourne will be limited to no more than two-thirds the normal workforce allowed onsite at any one time.

That means high-risk sectors such as food processing and supermarket distribution will have its capacity cut by a third.

Andrews said people should not panic buy and essentials will be available, but “every single item that you might normally buy” might not be there.

For major construction sites, no more than 25 % of the normal workforce will be allowed onsite. Small-scale construction will be limited to a maximum of five people onsite.

Premier Andrews said that the government had already nearly halved the number of people onsite on some of its biggest projects.

“I never thought I’d find myself in a position where I’d have to ask people not to go to work,” he said.

“These changes, in addition to the previous restrictions including working from home requirements, will mean around 1 million Victorians are no longer moving around the state for work,” he said.

All open businesses and services will have until 11:59pm this Friday, August 7, to enact a COVIDSafe plan focused on safety, prevention and response in the event that coronavirus is linked to the workplace – because beating this virus requires a rapid response wherever it rears its head.

“Whether it’s our food production, waste collection or supply chain logistics we need some things to continue – but they’ve got do so safely,” Andrews said.

No cleaning or mowing

A range of household services will also be prohibited.

“If you need a plumber because a pipe has burst, then yes, you can have a plumber come and do that work. But it’s not the time to be painting your house or having unnecessary, non-urgent work happen.”

Meals on Wheels, home and community care, and services for welfare and wellbeing will be able to continue.

While brothels, ski resorts, gambling, sport and recreation facilities are closed, horse and greyhound racing will continue to operate.

Businesses that suffer significant losses or need to close due to the new current restrictions, can apply for support, with businesses in Melbourne and Mitchell Shire able to access up to $10,000, while those in regional Victoria can receive a $5,000 grant.

In abattoirs – the sites of several major outbreaks in the state – the workforce will be cut back to two-thirds, they will have to were PPE -gowns, masks and shields – similar to medical professionals, along with routine testing.

The Industry Coordination Centre within the Department of Jobs, Precincts and Regions will consider cases of businesses that “fall into grey areas when it comes to their operation”. The government’s list is below.

“Whenever you draw a line or whenever you write a list, there will never be complete certainty and clarity about every single item on the list or there will always be anomalies of people on any side of line that you draw,” Andrews said.

“I understand this will have real and heavy consequences for a number of businesses, workers and their families. We’ll do everything we can to lighten that load. Honestly, this will be an imperfect process.”

The Premier said that if this doesn’t work, then we’ll need a much longer list of complete shutdowns.

“It’s hard to imagine what a Stage 5 might look like. But it would radically change the way people live. Not just rules on when and where you can go shopping – but restrictions on going shopping at all,” he said.

“This will be hard. It’ll be frustrating. It’ll be confusing. For a lot of workers and their families, it’ll be heartbreaking.

But the only way to get people back to work and businesses back open is by making these tough decisions – and by Victorians abiding by them.”

Just as the Victorian Premier was outlining the latest restrictions, Tasmanian Premier Peter Gutwein announced plans to reopen the island state’s borders to selected states this week had been postponed because of the mainland outbreaks. The state will now remain closed to all until at least August 31.

Here is the Victorian Government’s list of business restrictions 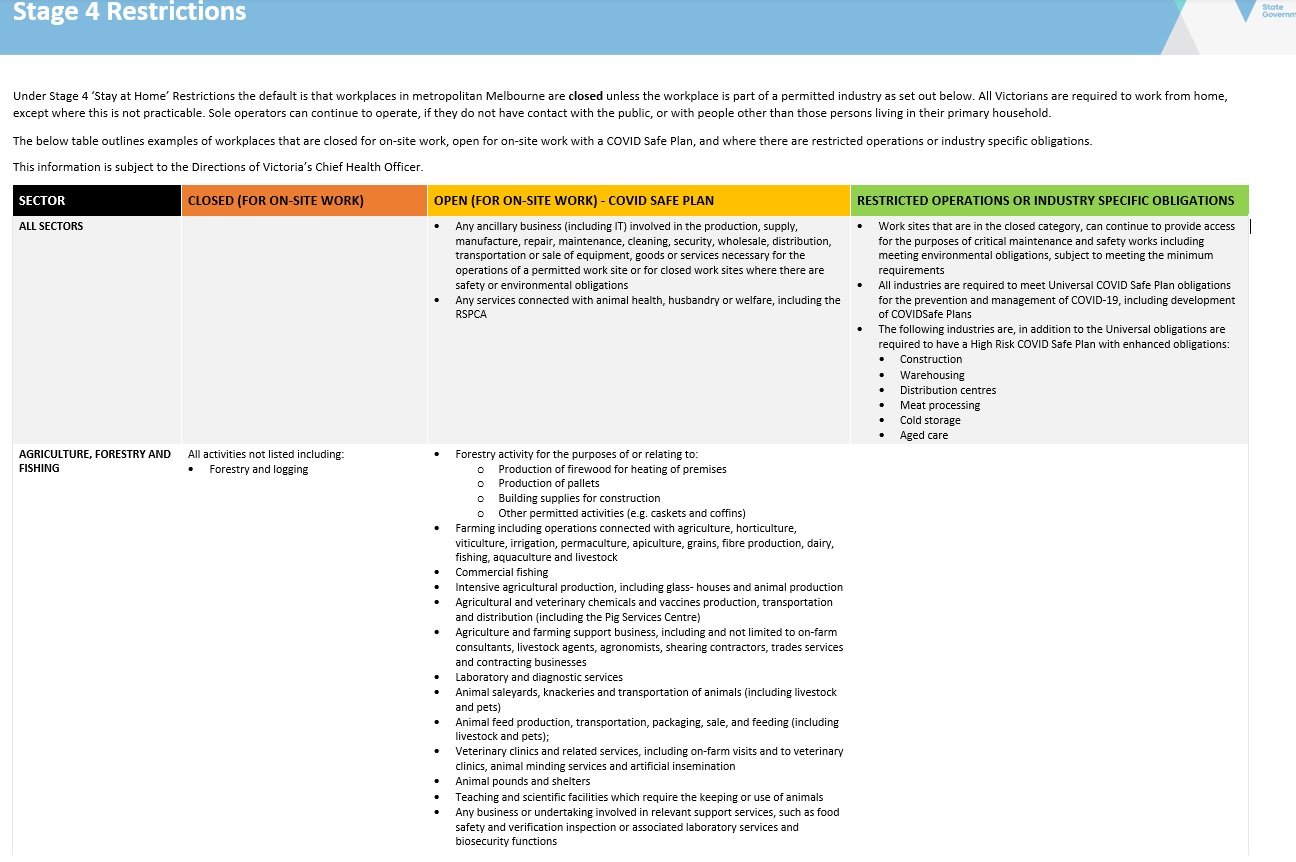 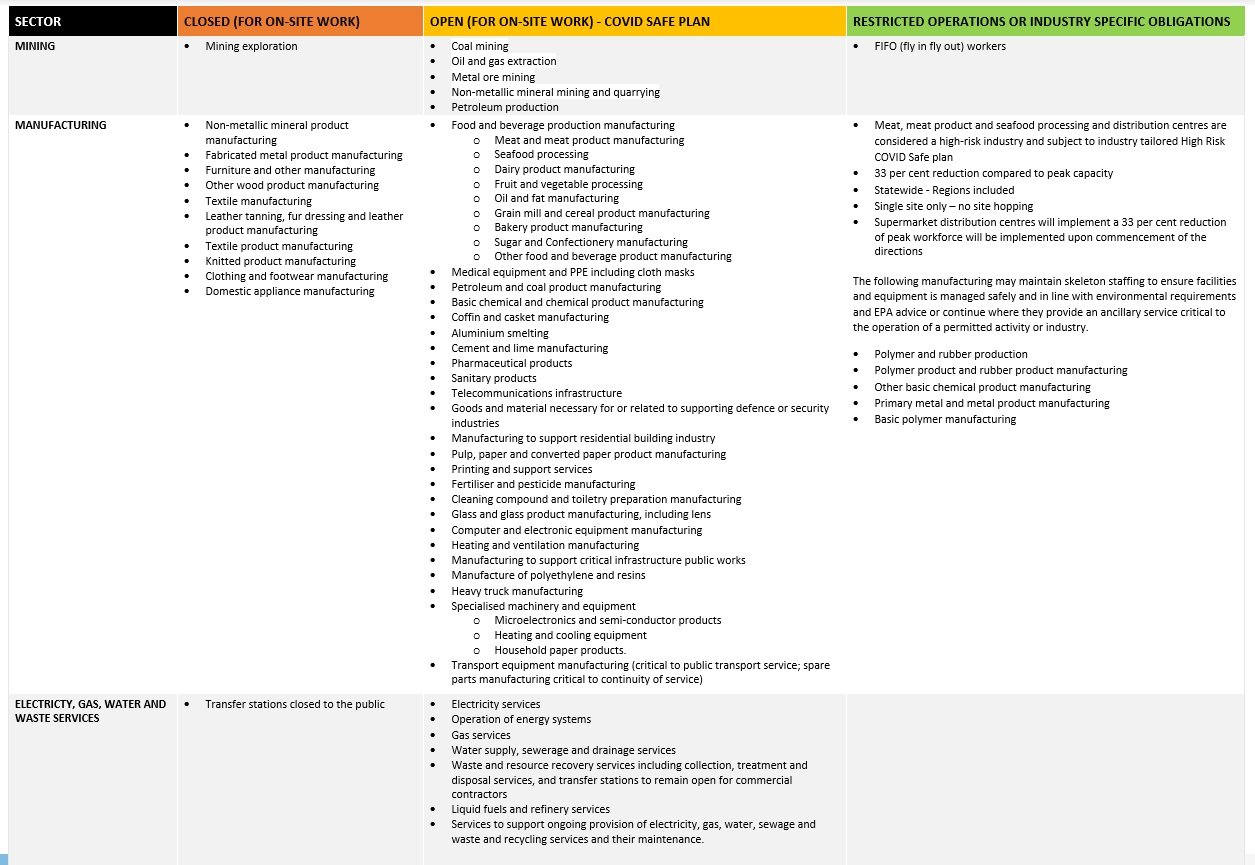 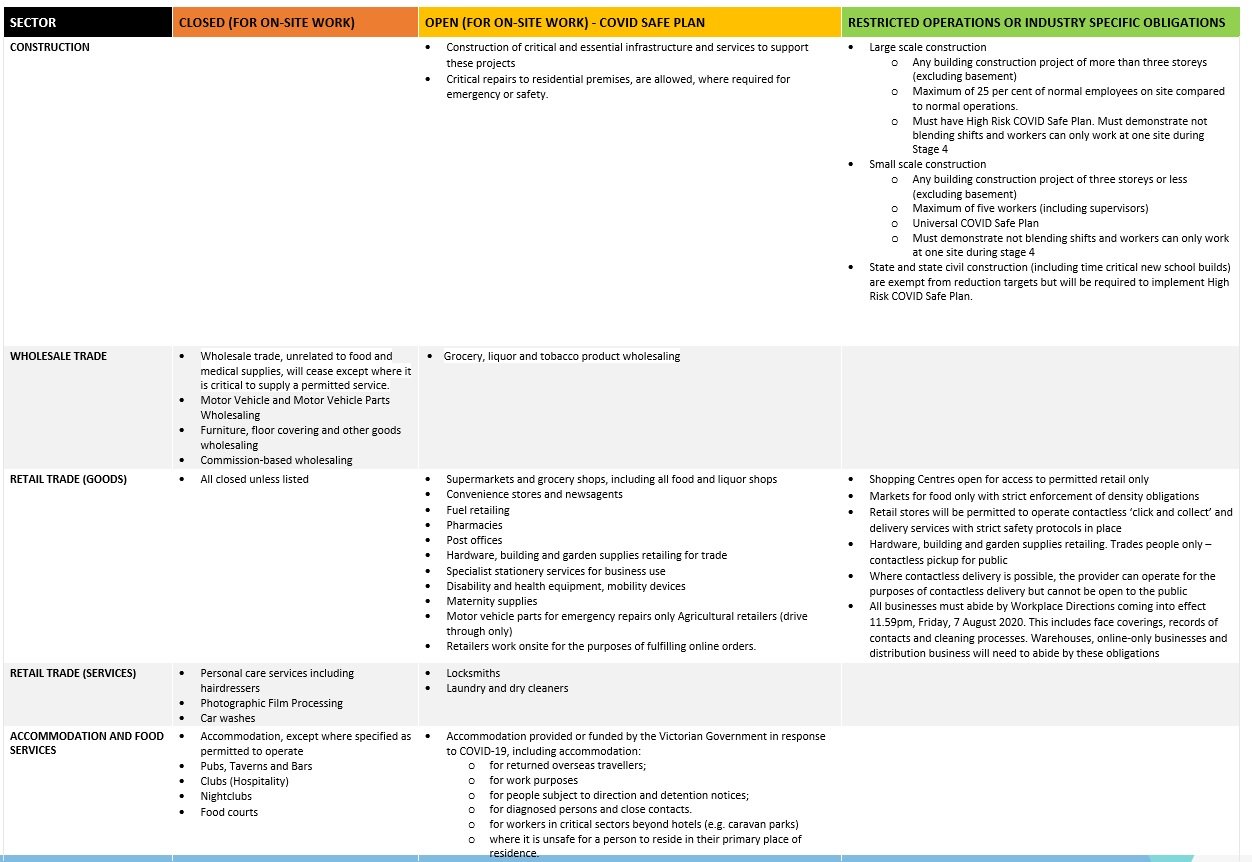 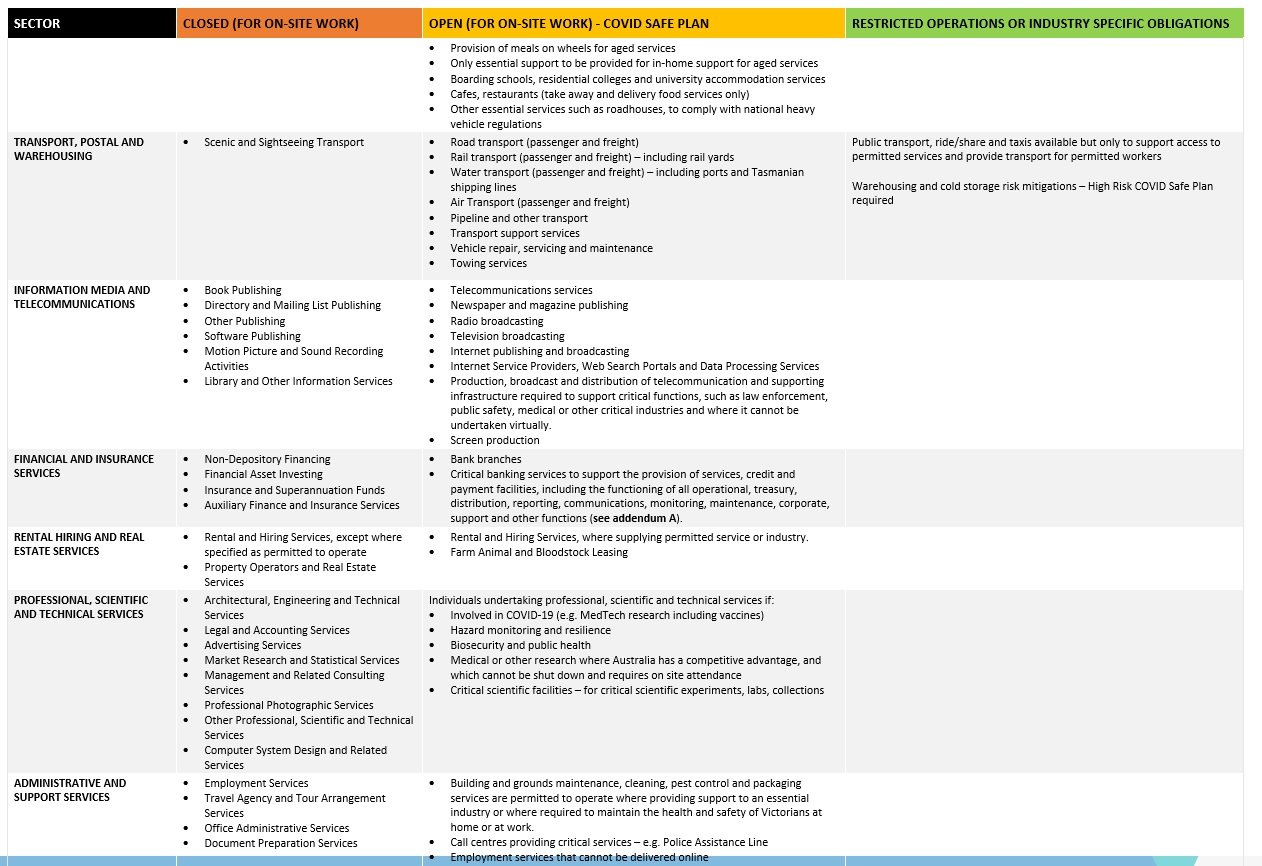 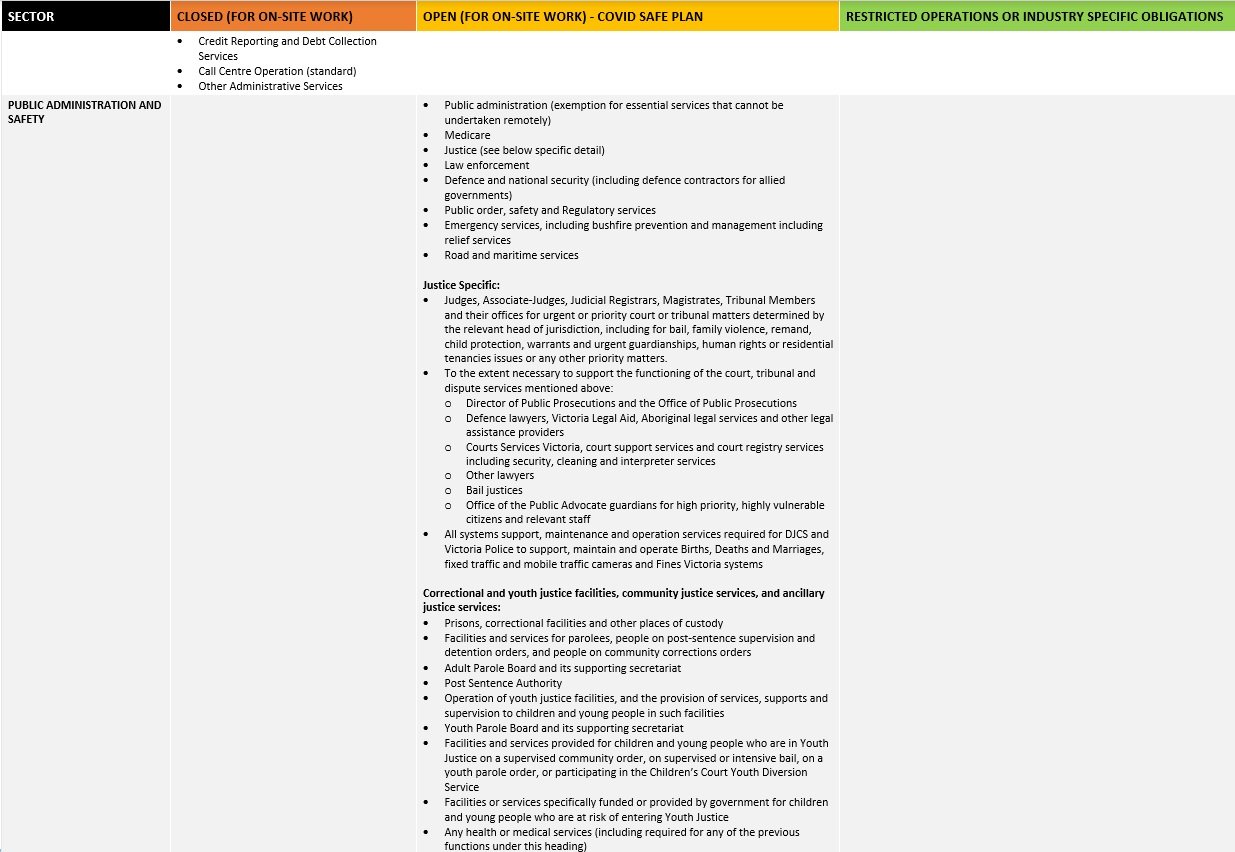 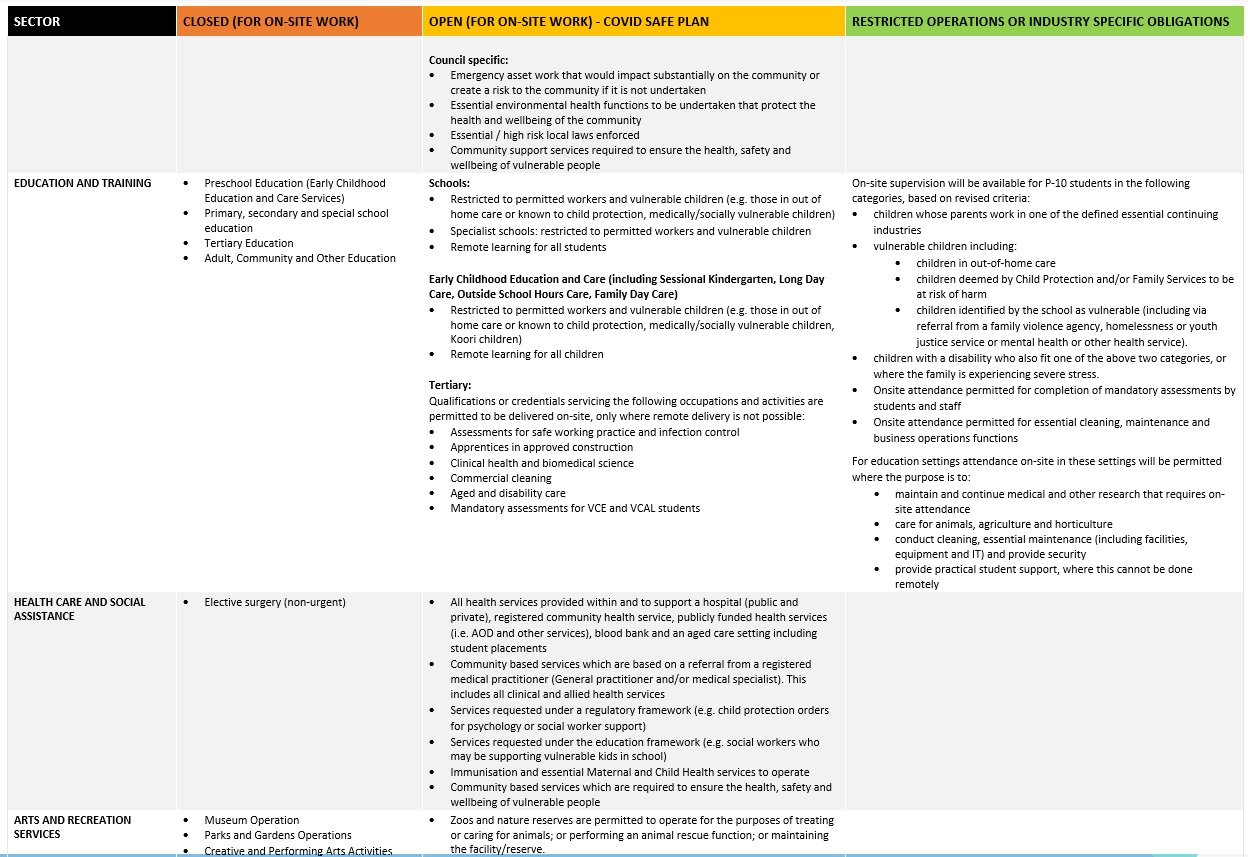 Previous article THE LIST: What Victorian businesses must close or can stay open under new stage 4 covid-19 restrictions
Next article Australia’s new biggest VC fund is worth $500 million
Via Topics
Tags COVID-19daniel andrewsVictoria