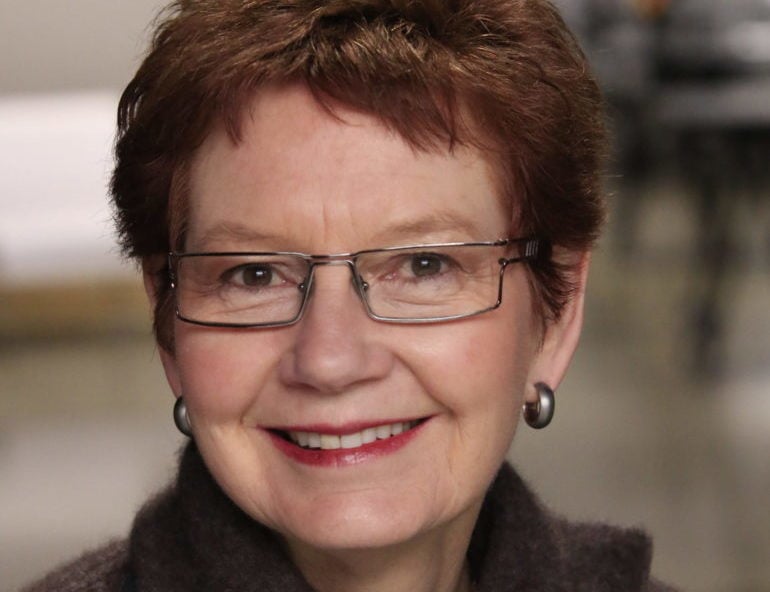 Scale Investors co-founder Susan Oliver has been named the Angel of the Year in Techboard’s annual Australian Angel Awards.

Oliver, who early this year stepped away the governance side of Scale to chair the Alice Anderson Fund, the Victorian government’s sidecar fund, was a worthy recipient accord to Angel Awards founder and Techboard co-founder Rafael Kimberley-Bowen.

She was recognised for her contribution to Angel investment and overall positive impact on the Angel community. She’s the first female winner of the category in the four years the awards have been held.

“Susan Oliver is a pillar of the Victorian and indeed Australian Angel community, and has been instrumental in facilitating Angel investment and education, as well as much needed support for women entrepreneurs,” Kimberley-Bowen said.

“We often lament the discouragingly low rates of female involvement in venture capital and Angel investment. But in a further acknowledgement of the increasingly key role played by females in the community, half the nominations received for this year’s Angel of the Year award were for female investors.”

Oliver co-founded her female-focused VC fund in 2013 and said the startup ecosystem was on a roll.

“In the past 10 years it has built exponentially. It is exciting, it is great to see the flow of creative solutions to important problems, it is no longer only the domain of universities and research groups – it can be your neighbour or your student,” she said.

“As an angel it is a great place to learn what innovation is, where technology is heading and play a role in building Australia’s innovation ecosystem. It requires patience but the additional bonus is a good return on investments.”

But Oliver said there was still much that needed to be rethought and reinvented.

“There is much scope for the creators and technologists and they need the support of funders and mentors and none are more important than the first risk takers – the angels,” she said.

“Often angels are also mentors, facilitators of introductions and advisors. I am proud to be an angel. I am also proud to have enabled and supported Scale Investors to bring specific funding and support to women led start-ups  – at the time we at Scale pioneered a gender lens be brought to angel funding in 2013 only about 2% of early stage funding flowed to women – and to bring women investors into an ecosystem where they also are still dramatically under- represented.”

Among the other award winners, Brisbane Angels received Best Angel Exit of the Year, with a 23x return on its investment in fraud prevention platform Arkose Labs. The group made a series of investments in the company (previously known as SwipeAds), from 2014, and exited only part of its investment over two separate rounds in FY21, continuing to hold a substantial stake in the venture.

Queensland is on a roll at the moment too, with the edtech Go1 becoming a unicorn following a massive $273 million series D led by SoftBank, Brisbane workforce productivity startup Skedulo raising $100 million from SoftBank, and Clipchamp exiting with a sale to Microsoft.

Richard Moore was named Most Active Angel Investor. Moore for 14 investments over the year, predominantly in Brisbane and Sydney-based startups, but he was also an early investor in Arkose Labs and a lead for Brisbane Angels investment. That exit gave him the chance to reinvest in new startups

“Deals like Arkose don’t come along every day. We recognised the opportunity from the moment the deal was presented. A gap existed in the market and Arkose team truly stacked-up in terms of both drive and capability. It proved to be an outstanding winner,” he said.

Moore said he thinks of angel investing as a positive-sum probability game.

“In the last few years, the Australian startup ecosystem has matured significantly, so it is now much easier to access a lot of high quality curated deal flow via Angel groups like Brisbane Angels and early-stage syndicates. I hope I have a 100x somewhere in my portfolio!”

The Brisbane Angels received the Most Active Angel Group award, with 32 qualifying investments (down from last year’s tally of 37) into 34 companies over the 12 months.

Chairman John Mactaggart said the win was testament to the active involvement of the group’s 85 angel investor members.

“We might not be the largest angel group in Australia, but our membership punches above its weight and is very active in the angel investing space. In that regard 20/21 saw us get involved in more deals than ever,” he said.

Mactaggart said 14 of the group’s members participated in the Arkose deal, and further exits are imminent for other group investments.

“We’ve hit what we think is a bit of a purple patch,” he said.

“The quality of the deal flow is outstanding, and the time is right for many of the companies we invested in several years ago to exit.”

While Brisbane dominated in number of investments made, the total amount invested was a closer call between the top three Angel groups, Scale, Brisbane and Sydney.

Perhaps unsurprisingly given the broader economic climate, total funds deployed by Australian angel groups fell in 2021, returning to 2019 levels at around $9 million.

All angel groups saw a drop in total amount invested, except for Scale Investors showing a minor increase. 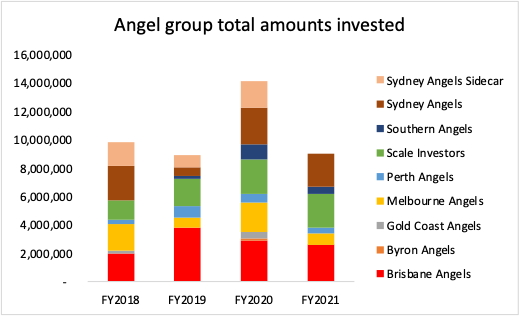 More details on angel investing in Australia are available from Techboard.