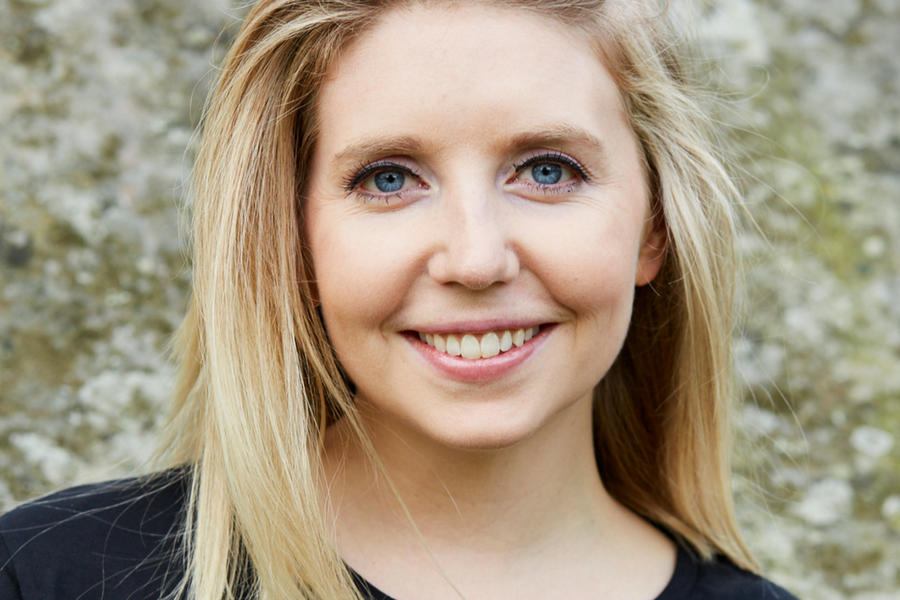 With perhaps its quickest turnaround yet, the results of this year’s Startup Muster survey are in and, as always, make for an interesting read.

Conducted across July and August, a total of 2214 respondents took part in this year’s edition, the fourth. Following a cleaning process, 567 verified startup founders, 226 future founders, and 452 startup supporters, such as incubators, accelerators, mentors, investors, and coworking spaces, have had their responses counted.

As the sector grapples with the challenge of engaging more people into startups, the answers to the question of ‘who is starting startups’ are first up.

As it turns out, the proportion of female founders has grown from 23.5 percent in 2016 to 25.4 percent this year, while 37 percent of future founders identified as female. However, just over 38 percent of startups reported that they have no full-time employees that are female.

Meanwhile, with concerns around the 457 visa high after Malcolm Turnbull in April announced the scrapping of the scheme to give Australian works priority “for Australian jobs”, the survey found 35.7 percent of founders and 37.7 percent of future founders were born outside Australia, with just over 46 percent of existing founders having moved to Australia between 5 and 15 years ago.

Startup Muster CEO Monica Wulff said, “New startups need to be able to fill skills deficits with talent from overseas if they are to survive and prosper and the startup community has been hit hard by the these changes. The consequences of changes should become clear in next year’s survey results.”

According to Startup Muster, 16.1 percent of startups have at least one current employee on a working visa, with 7.9 percent on a 457 visa. 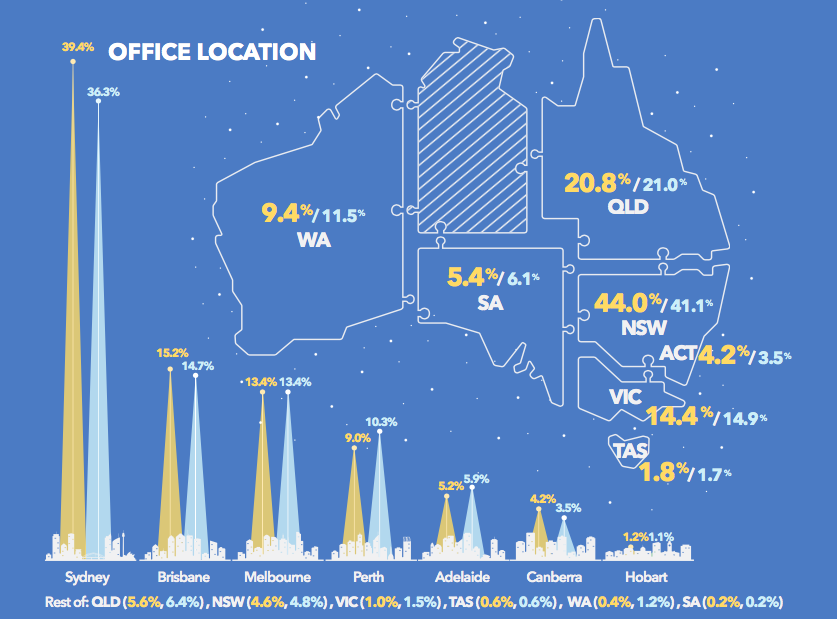 Victoria, meanwhile, has dropped. The 2017 edition reports that 14.4 percent of founders and 14.9 percent of all respondents are based in the state, with 13.4 percent in Melbourne alone. This is significantly down from the 18.8 percent based in Victoria as reported in last year’s survey.

Of course, participation must be taken into account here: a survey conducted across Victoria by LaunchVic earlier this year counted 1137 responses from businesses that met its definition of ‘startup’.

Home offices and coworking spaces are the most popular spaces for startups to set up in, at 54.6 percent and 48.8 percent respectively.

WeWork has made up significant ground since its launch down under just over a year ago, coming in second on the list of top coworking spaces used, behind Sydney and Brisbane’s Fishburners. Rounding out the top five are River City Labs in Brisbane, Sydney’s Stone and Chalk, and Perth’s Spacecubed.

As you may have expected, fintech is the most popular sector for local startups with 19.7 percent of founders working in this space, up from 15.9 percent in 2016.

Making a big jump is artificial intelligence; with 6.4 percent of founders in 2016 indicating they work in this space, this has grown to 14.5 percent this year.

Looking at who these startups are selling to, Australia remains the main market. Despite the wider business push to look to China, the USA and UK are the biggest foreign markets for local startups.

Selling subscriptions is how 32.9 percent of startups are making their money, down from 36.4 percent last year, while the amount raking it in from purchases through their website has also decreased, from 14.3 percent in 2016 to 11.1 percent in 2017.

‘Purchases through another medium’, meanwhile, increased from 4.6 percent to 8.1 percent in the last year.

As to how much these businesses are making, for 40.4 percent it’s nothing yet – though given 44.1 percent of founders stated they founded their business in 2016 or 2017, it makes sense many are pre-revenue.

Looking at how easy it is – or isn’t – to raise, 6.1 percent of founders stated they were approached by investors when not actively raising and in turn declined the investment, while 5.8 percent stated they couldn’t raise and 5.2 percent reported they tried to raise and were oversubscribed.

As the state and federal governments look to boost their support for startups, 47.7 percent of startups stated they have applied for a government grant or scholarship, and 29.2 percent have received one.

With the question of whether a university education is worthwhile for founders always a topic of debate, Startup Muster found over a quarter of founders have a Bachelor’s degree, while 24 percent have attained a Masters.

Rather than education or lack thereof, 34.8 percent of founders stated that life circumstances that require a stable income have been the biggest hindrance to running their startup, while 30.6 percent identified financial dependents as a factor and 22.4 percent said it was the lack of technical skills needed to start.

Life circumstances and financial dependents are also the biggest hindrances for future founders, but lack of confidence in their viability of their idea comes in third place, affecting 30.3 percent of future founders.

After identifying a compelling opportunity or solving a problem they were experiencing, for 23 percent of founders having a supportive partner or spouse is the most critical thing in founding a startup.

According to Startup Muster, 63 percent of founders consider themselves to have strong skills in strategy, 53.5 percent in general business operations, and 40.8 percent in project management.

With 59.1 percent of founders having founded at least one startup in the past, 47 percent of these respondents stated their last business is still operating, while 19.2 percent said they found a better idea to work on, and 17.8 percent are still actively involved in their previous business.

Looking ahead to the next 12 months, undertaking a capital raise in Australia is top of the to-do list for 60 percent of founders, while expanding sales significantly inside Australia and out are also priorities. Almost 30 percent of founders stated they will be looking to raise capital overseas, while 18.5 percent stated they will travel overseas to take part in a program that will add value to their organisation.

Startup Daily had a chat to Wulff about the survey results in the latest episode of the Glass Ceiling podcast: