The startup, founded in 2018, is building the next generation of Earth observation services using artificial intelligence and what’s known as Space Edge Computing.

Two of Spiral Blue’s SEZ computers are aboard SatRevolution satellites sitting at an altitude of 500km above Earth in a sun-synchronous orbit.

As part of this mission, 5m resolution imagery captured by Satrevolution’s optical satellites will be passed onto an onboard SEZ unit, allowing the prototype computer to take in and process EO imagery in real time. 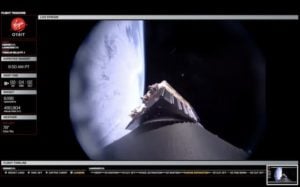 The satellite payload bay in Space 1 ready to be deployed Photo: Virgin Orbit

This mission gives Spiral Blue the chance to perform end-to-end testing and space qualification of its SEZ computer on the Polish satellites.

Spiral Blue’s CEO Taofiq Huq said that following in-orbit qualification, the SEZ will be tested in Q4 2021 and throughout 2022.

“We’re incredibly thankful to see the successful launch and deployment of the satellites carrying our Space Edge Computers,” he said.

“We are looking forward to working with SatRevolution to begin testing our hardware in orbit.”

The cargo, which took off from the Mojave Air and Spaceport in California, was part of a rideshare mission for Virgin Orbit titled “Tubular Bells, Part One” – a reference to the 1970s Mike Oldfield album that made Sir Richard Branson’s first fortune and launched Virgin Records.

Spiral Blue was recently a recipient of the Australian Space Agency’s Moon to Mars Supply Chain Capability Improvement Grant, to support  the development of the startup’s Space Edge Services platform. The company is also developing Vessel Detect under a Defence Innovation Hub contract.