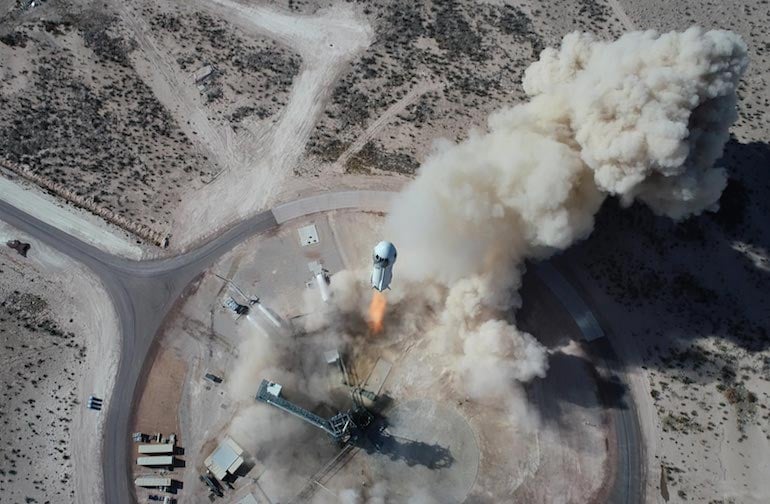 Amazon boss Jeff Bezos and his brother Mark will be among the first passengers aboard his Blue Origin space mission next month.

The world’s second richest man took to Instagram to announce he’d be aboard New Shepard’s first human flight on July 20.

“Ever since I was five years old, I’ve dreamed of traveling to space,” Bezos wrote, announcing his brother would join him.

“The greatest adventure, with my best friend.”

Jeff Bezos founded Blue Origin with a vision to start colonising space, including the moon, using reusable rockets. The company has been flight testing its rocket systems since 2012, and has completed 15 successful consecutive missions, including three successful escape tests. Inside Blue Origin’s New Shepard capsule, which will carry Jeff Bezos and others into space. Photo: Blue Origin

New Shepard takes its name from Alan Shepard, who 60 years ago this year became the first American to fly into space. Since then, fewer than 600 astronauts have reached space above the Kármán Line to see the borderless Earth.

The suborbital flight will rise about 100km above earth and spend several minutes in space before returning to Earth, giving the trio of passengers the chance to experience weightlessness and see the planet’s curvature.

Alongside the Bezos brothers, an auction for the remaining seat in the New Shepard capsule is currently underway at BlueOrigin.com ahead of a live online auction on June 12.

Registrations for the live auction close on June 10. Bidding is already at US$2.8 million (A$3.6m) with nearly 6,000 participants from 143 countries.

The winning bid amount will be donated to Blue Origin’s foundation, Club for the Future, to inspire future generations to pursue careers in STEM and to help invent the future of life in space.

The New Shepard rocket and capsule is capable of flying six passengers autonomously into suborbital space on commercial sightseeing trips before the capsule drops back to earth under parachute.

It will take place just a fortnight after Bezos steps down as Amazon CEO.

Blue Origin is also working with NASA on the Artemis program, its mission to return to the Moon in the mid-2020s.