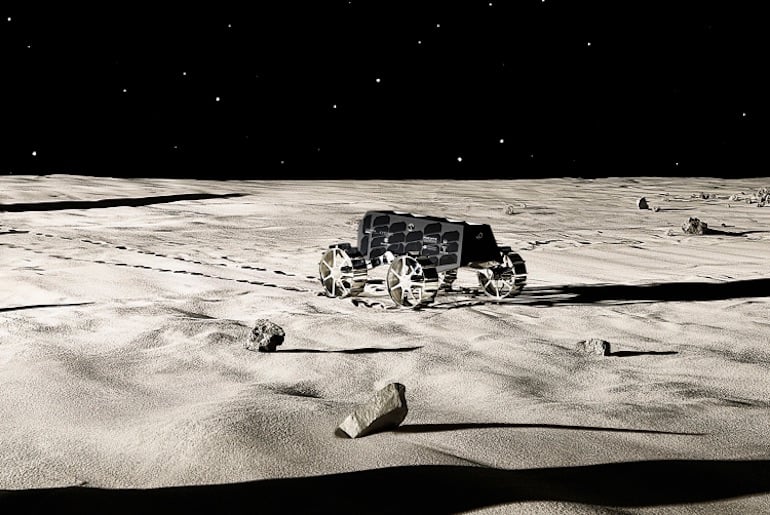 Last month the Australian Space Agency announced plans to send an Australian-made rover to the Moon by as early as 2026, under a deal with NASA.

The rover will collect lunar soil containing oxygen, which could eventually be used to support human life in space.

Although the deal with NASA made headlines, a separate mission conducted by private companies in Australia and Canada, in conjunction with the University of Technology Sydney, may see Australian technology hunting water on the Moon as soon as mid-2024.

If all goes according to plan, it will be the first rover with Australian-made components to make it to the Moon.

Roving in search of water

The ten-kilogram rover, measuring 60x60x50cm, will be launched on board the Hakuto lander made by ispace, a lunar robotic exploration company based in Japan.

The rover itself, also built by ispace, will have an integrated robotic arm created by the private companies Stardust Technologies (based in Canada) and Australia’s EXPLOR Space Technology (of which I am one of the founders).

Using cameras and sensors, the arm will collect high-resolution visual and haptic data to be sent back to the mission control centre at the University of Technology Sydney.

It will also collect information on the physical and chemical composition of lunar dust, soil and rocks — specifically with a goal of finding water. We know water is present within the Moon’s soil, but we have yet to find a way to extract it for practical use.

The big push now is to identify regions on the Moon where water sources are more abundant, and which can deliver more usable water for human consumption, sample processing, mining operations and food growth.

This would also set the foundation for the establishment of a manned Moon base, which could serve as a transit station for further space exploration (including on Mars).

Once the Hakuto lander takes off, the first challenge will be to ensure it lands successfully with the rover intact. The rover will have to survive an extreme environment on the lunar surface.

As the moon rotates relative to the Sun, it experiences day and night cycles, just like Earth. But one day on the Moon lasts 29.5 Earth days. And surface temperatures shift dramatically during this time, reaching up to 127℃ during the day and falling as low as -173℃ at night.

The rover and robotic arm will also need to withstand the effects of space radiation, vibrations during launch, shock from the launch and landing, and exposure to dust and water.

At the same time, the arm must be light enough to conduct advanced manoeuvres, such as grabbing and collecting moon rocks. Advanced space-grade aluminium developed in Australia will help protect it from damage.

The team behind the mission is currently in the process of testing different designs of the robotic arm, and figuring out the best way to integrate it with the rover. It will be tested together with the rover at a new lunar test bed, at the EXPLOR Space Technologies facility in New South Wales.

Like the one used by NASA, this test bed can mimic the physical and chemical conditions on the Moon. It will be critical to determining whether the rover can stay mobile and continue to function under different environmental stressors.

Step into your astronaut boots

The rover will also send back data that allows people on Earth to experience the Moon with virtual reality (VR) goggles and a sensor glove. Haptic data collected back by the robotic arm will essentially let us “feel” anything the arm touches on the lunar surface.

We plan to make the experience available as a free app — and hope it inspires future generations of space explorers.