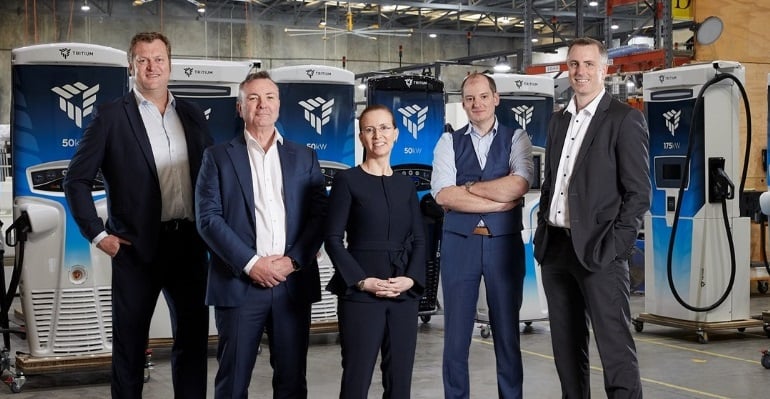 Brisbane-based electric vehicle fast charging company Tritium will list on the NASDAQ exchange under a deal with a US listed special purpose acquisition company (SPAC) Decarbonization Plus Acquisition Corporation II (NASDAQ: DCRN) that values the 20-year-old Australian business at A$1.55 billion (US$1.2bn).

It’s most notable client is film director James Cameron, with Tritium supplying the battery management system for his Australian-made “Deepsea Challenger” submersible, which descended to the bottom of the Mariana Trench in 2012.

More recently the company turned its attention to the EV sector and says it has now supplied more than 2.7 million high-power charging sessions for electric vehicles 41 countries. The business has more than 340 employees on four continents and is the world’s only pure-play DC fast charging manufacturer.

It’s the world’s second-biggest fast-charging business with more than 4,400 units in place globally.

Tritium CEO Jane Hunter said the deal was a vote of confidence for the company’s vision and market viability.

“We plan to expand to three global manufacturing facilities, expedite product development, grow our global sales and service operations teams, and so much more,” she said.

“This agreement funds that growth plan, enabling us to expand our business operations, enhance our products, and provide even more services to our customers.”

DCRN chair Robert Tichio will join Tritium’s board under the deal and said: “As the wave of investment capital directed to environmental, social, and corporate governance (“ESG”) goals continues its acceleration, we believe a publicly traded Tritium will serve as a valuable core holding for ESG investors.”

The transaction is anticipated to generate gross proceeds of up to approximately US$403 million (AUD$520m) of cash, assuming minimal redemptions by DCRN’s public stockholders.

The cash injection will be used to fund operations and growth.

The pre-money enterprise value of the combined company is US$1.4 billion (AUD$1.8 billion) at the price of US$10 per share, excluding cash to go to the balance sheet.

When the deal goes through, Australians Trevor St Baker, founder and chairman of St. Baker Energy Innovation Fund), and White Energy director Brian Flannery will also join the board along with Kara Frederick, MD of Tiger Financial Group.

St Baker said it was an “incredibly proud day” for the three founders and the country tech and e-mobility sectors.

“We’re proud to have supported the Tritium success story from a start-up in Brisbane, to a global exporter and manufacturer of advanced charging technology with a leading global market share,” he said.

His private fund, the St Baker Energy Innovation Fund, was an early investor in Tritium and is currently the largest shareholder, at around a 26% stake. DCRN will have a 30% stake in the merged entity.

The deal has already been approved by the boards of both companies. The listed company will take Tritium’s name and trade under the NASDAQ ticker DCFC.

SPAC deals boomed during 2020, with more than A$100 billion raised, up more than 400% on the previous year. But have fallen out of favour in 2021 amid a growing view that they provide minimal value for retail investors.

SPACs are sometimes derisively referred to as a “blank check company” or “poor man’s private equity fund”. While not allowed in Australia, they operate in a similar fashion to a reverse takeover or “backdoor listing” here, with the listed shell company designed to acquire a private company and avoid the traditional IPO process.