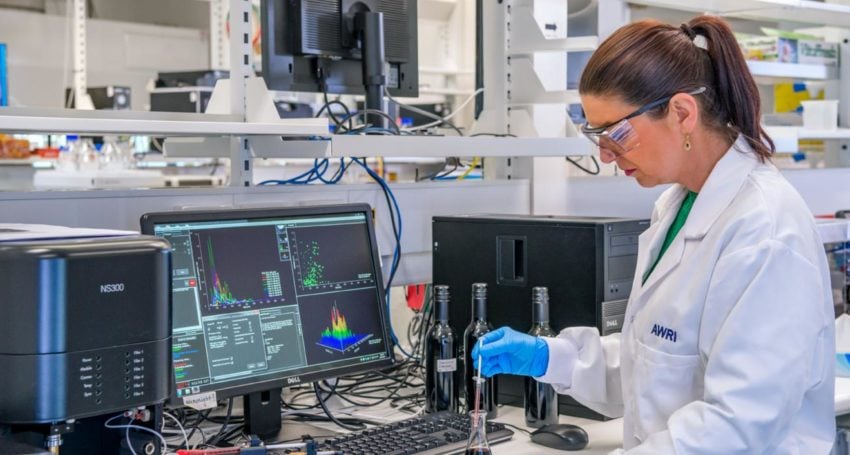 Scientists at the Australian Wine Research Institute and the University of South Australia have built on world-leading research to bind unwanted proteins in wine to coated nanoparticles, then using a magnet to remove them from wine altogether.

Now new Wine Australia-funded research has also shown costs can be slashed by effectively cleaning the nanoparticles so they can be used multiple times.

“Protein haze is a serious problem for the wine industry. Not only because consumers see it as a defect, but also because conventional bentonite treatments can cause significant wine volume loss, which is also reflected in the bottom line,” Mierczynska-Vasilev said.

Unwanted proteins that are unstable in heat can cause cloudiness in white wines, if the temperature rises the proteins can accelerate ageing and create a haze in the once-clear wine.

Winemakers traditionally use bentonite to remove these proteins and prevent haze formation, but it is a clay and swells in the wine solution.

When bentonite is removed it can lead to a loss of wine volume of approximately three per cent, it is also difficult to dispose of and cannot be recycled.

“In Australia, the overall estimate of loss caused by bentonite fining is around $100 million annually, and globally, this equates to approximately $1 billion per year,” Mierczynska-Vasilev said.

“Using this technology, winemakers could potentially remove haze-forming proteins safely and efficiently, without bentonite-associated volume loss, and importantly, could do so multiple times with the same nanoparticles.”

Currently, the magnetic nanoparticles being used are coated with acrylic acid polymers which, when placed in heat-unstable wine, attract and bind proteins to the nanoparticles’ surfaces.

Researchers explored ways to clean the particles once they are drawn from the wine using a magnet.

They found the magnetic nanotechnology successfully removed 98 per cent of haze-forming proteins from wines in ten consecutive adsorption-desorption cycles with cleaning.

This was “clearly indicating its ability for reuse”.

“Unlike bentonite, a defining feature of this nanotechnology is its ability to be regenerated for re-application, without any adverse effects on the wine’s colour, aroma and texture compounds,” Mierczynska-Vasilev said.

“While there is still some way to go before the technology can be practically applied in wineries, and the need to obtain regulatory approval both in Australia and overseas, given the clear economic, sustainable and sensory benefits, this nanotechnology has a very strong potential for adoption – it’s absolutely a ‘watch this space’.”

Project manager Dr Keren Bindon said coated nanoparticles are expensive and this new research showed that being able to recycle improved its ability to be commercialised.

“What we are looking at now is for alternative nanoparticles that are not coated that may be cheaper to produce,” she said.

Funded by Wine Australia, the research combed the global standing of the AWRI in wine research and the world-class capabilities in surface nanoengineering developed at UniSA’s Future Industries Institute.