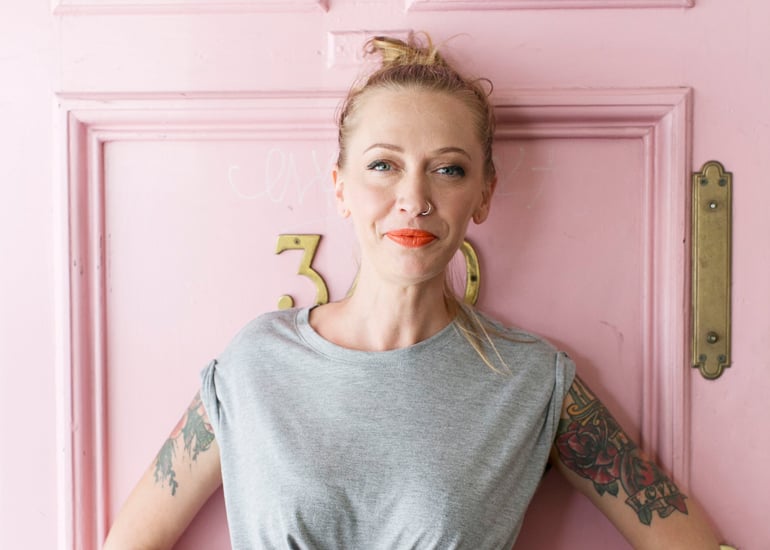 Renae Smith owner of Bake Mixes has a long been a lover of fast, simple healthy food.

In 2014 at the urging of her daughters she auditioned as a contestant on Masterchef. Her flavoursome cooking earned her a spot on the show, where she was soon bestowed with the moniker of ‘Mystery Box Queen’. Renowned for her ability to turn a series of unrelated ingredients into a delicious feast, she became a favourite of the judges. Knocked out of the series before the final round, Smith’s appetite had been whet.

Trading on the profile she had gained through the Masterchef experience, Renae packed up her cooking knives and her family and set off to travel the world. Her culinary adventures saw her landing in India where she soon became a regular at Good Food Shows in Mumbai and Durban.

More travel and more cooking shows followed. Wherever she went, this home chef turned professional, found herself approached by people asking for tips on how to make wholesome, healthy treats. The questions stayed with her, and the kernel of an idea began to form.

Cut to 2018 and Renae was back in Australia and the opportunity to take over the Bake Mixes brand fell in her plate.

“I had been considering a business similar to Bake Mixes after I’d spent a couple of years doing cooking shows around the world. I was regularly asked for healthy and delicious snack ideas rather than the gourmet dinner party stuff I was making. Then I saw Bake Mixes was for sale, so I thought – this looks like a great start. It gave me the kick start I needed to get going,” she explains.

Not satisfied to simply take over the brand, Renae sought to reinvent Bake Mixes with a focus on healthy solutions for time-poor families and singles.

“Firstly, I wanted the mixes to be customisable. So, they can work for vegans and non-vegans. I wanted any milk to work. Any oil. Any sweetener. Secondly, I didn’t want to compete with Betty Crocker’s sugar-loaded mud cakes, or on the flip side, the protein-enhanced gym supplement style mixes. I wanted them to be for everyday people every day. Delicious. Easy. Healthy. But also not insane. Approachable! I wanted my kids to love them, AND my nana,” she says.

From school lunches to mid-afternoon snacks in the office, the Bake Mixes range is designed for convenience with most products working with any choice of milk (soy, nut, dairy), sweetener (honey, maple, agave) and oils (coconut, olive, rapeseed). To ensure Bake Mixes would also be suitable for those who suffer from food sensitivity, the products are also wheat-free, egg-free, dairy-free and refined sugar-free. Renae says Bake Mixes are 100 per cent committed to using high-quality whole ingredients. Many of which are organic and locally sourced, offering complete assurance of quality with every pack.

To assist in the manufacture of her Bake Mixes, Renae works with the Endeavour Foundation. This organisation supports people with intellectual disabilities to find gainful employment, education and training. The mixes are all produced out of one of Endeavour’s premises. Speaking of the partnership, which she had inherited from the brand’s original owner, Renae comments:

“I found Endeavour to be incredibly supportive of the people who work for them, and they were also incredibly nice to work with for me as well. They understood that I was new at the whole thing and tried to make it as easy as possible for me.”

Initially thinking she would ‘shop the job around’, Renae says she was won over by Endeavour’s commitment to her product.

“After a little while, I decided that I wasn’t going to shop around and would develop my relationship with them. I’ve been with them since the beginning, and I won’t be changing. I love the business ethos and the fact that they give so many great opportunities to people who need them,” she says.

Another fortuitous partnership for the brand has been its inclusion as a product on Amazon Launchpad. Renae credits this with raising Bake Mixes brand awareness and making the logistics of shipping her products simple.

“Directing people to a website is quite tricky. SEO takes a lot of time, Facebook ads charge a fortune, and doing the PR and marketing yourself it’s a full-time job. By using Amazon, you are already reaching a pool of qualified buyers who are already looking for products to purchase. By using Amazon Launchpad, I was able to have my product positioned directly in front of people who wanted to buy them,” she says.

Now, based in the UK, Renae says partnering with Amazon has allowed her to simplify the purchase cycle.

“While I live in the UK, my business and entire customer base is in Australia. Working with Amazon has allowed me to have my products available to customers whom I may not have been able to reach without the service. It has allowed me to focus more of my time on growing the business and producing new products and developing new relationships with distributors, rather than having to constantly try and market my product and then distribute those manually. It also is incredibly cost-effective. It worked out to be much cheaper for me to sell products through Amazon than to sell them myself and use an independent fulfilment company.”

While Renae said she had initially considered selling her products through supermarkets, costs were prohibitive and online has proved a far better sales solution.

“We initially spoke to a supermarket who wanted us to drop the price of a product so far down that we would be making only around four to six cents per product. This was just completely ridiculous to me and I decided that managing the sales online would be a much better option. I also believe that my products need to be understood and having them simply sit on a shelf next to other cake mixes would not be able to explain the brand in the correct way,” she explains.

As for what’s next, Renae has world domination in her sites.
“As I’m living in the UK, I have toyed with the idea of launching the brand over here. Thanks to Amazon, I am considering trialling the products on Amazon in different countries. I can do this by first sending my products to their international fulfilment centres, rather than diving headfirst into international production,” she says.

“I would love to be able to have Bake Mixes sent all over the world. We get enquiries constantly from many other countries, specifically the USA and UK.”

This month Renae will be one of the judges of Amazon’s Launchpad Grant initiative. She encourages small business owners to consider applying.

“As a small business, I know it can be very hard to make ends meet and profit margins are usually consistently quite small. Entering any sort of business grant is a good idea, but one such as the Amazon Launchpad Grant is incredibly generous. It also has such a great concept of helping businesses focus on growing their business rather than working in the business.

“I know that if the grant had been around when I was taking over Bake Mixes, it would’ve been an incredible help to me. I think that other businesses should take advantage of this opportunity. Especially during the difficult times that we are living through at the moment.”

She says for her, a stand out entrant will have a good understanding of where there is business is at and where they want to be.

“I’ll be looking for entries that are able to show a clear pathway of growth and understand what is required to make their company shine. It will then allow the most effective use of the grant to be implemented across the business and gain the strongest results.”

Previous article A breakthrough CSIRO-backed startup using seaweed to cut down cow farts is set to change agriculture
Next article The incredible story behind creating Buildkite, the $200 million ‘best-kept secret in DevOps’, by an investor there from the start
Via Amazon Launchpad
Tags Amazon Launchpadinnovation grants