ASX-listed online marketplace Redbubble, which sells t-shirts, mugs and art by independent artists, has seen its revenue jump 37% to AU$70 million in the first quarter of FY2020, posting a massive turnaround in its profitability on 12 months ago.

Shares in the business (ASX: RBL) have doubled in value since June and in early trade today, sit around $1.76, although that figure is roughly the same level as 12 months ago.

Redbubble was founded in Melbourne in 2006 and listed in May 2016. Last October the company bought US online retailer TeePublic for A$57.7 million, a move that has rapidly boosted the bottom line.

CEO Barry Newstead called it “a strong result” in the company’s investor call yesterday.
TeePublic revenues have grown by 42% since its acquisition and now contributes around 17% of the company’s total revenue.
“I could not have imagined a better outcome 12 months ago. This is a great business with a ton of potential,” Newstead said.

Announcing its Q1 results to the ASX, Redbubble’s operating EBITDA (Earnings Before Interest, Taxes, Depreciation and Amortisation) profit was $3.7 million, a $4.5 million turnaround in the year-on-year comparison. (The company reports on a constant currency basis taking into account fluctuations in the AUD, with 94% of revenue generated offshore.)

That figure was also bolstered by $700,000 due to a change in the accounting treatment for property leases. 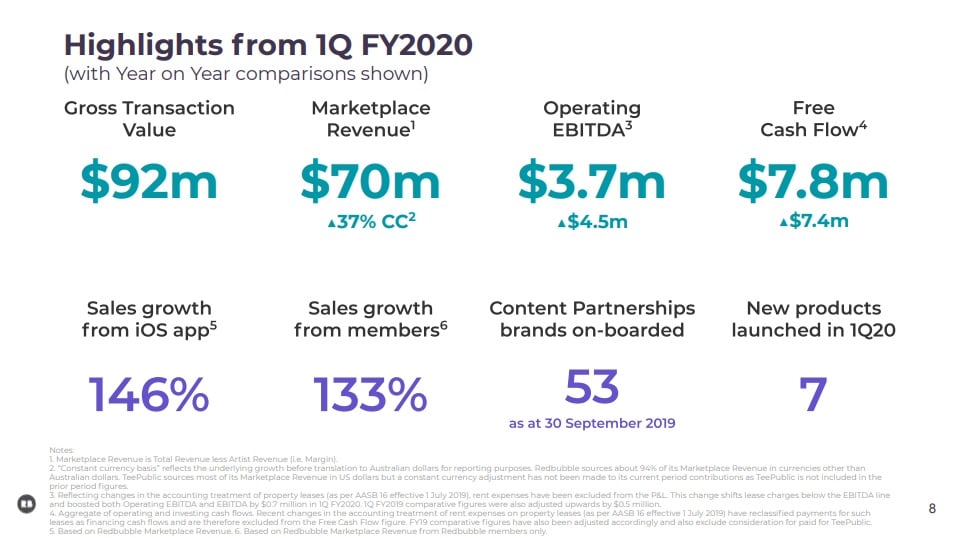 In FY19, Redbubble posted its first result in the black since listing, with an operating EBITDA profit of $3.8 million, a $7.7 million improvement on the previous year.

North America is Redbubble’s biggest market, accounting for 66% of revenue. Australia as a percentage of total revenue, has been in decline and now sits at 6%.

Newstead said both Redbubble and TeePublic were both profitable in the quarter.

The business now has 2.8 million active members and more than one million artists selling on its sites and recently signed a deal with entertainment giant NBC Universal.

Newstead pointed to gross profit increasing towards 37% as Redbubble moved from “a search transactional business to a branded relationship business” reducing its reliance on Google and Facebook and social media marketing investment.

Operating expenses as percentage of marketplace revenue have also been falling and now sit under 25%.

CFO Emma Clark told investors yesterday that “we believe the company is undervalued compared to its peers” and despite the dramatic rise in the share price in Q1, “a valuation gap still remains”.

Redbubble’s share price sat at $1.46 on Tuesday before the Q1 results release.

The company’s market cap sits at about $450 million.

Morningstar analysts agreed the business is undervalued, but has a target price of $1.67.