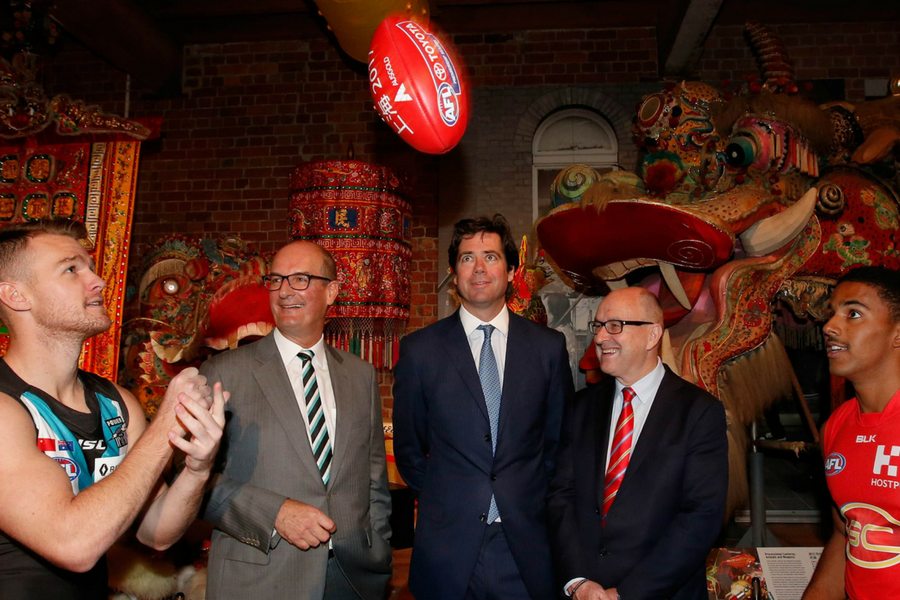 There’s a lot of money to be made by forward-thinking sports clubs and leagues taking China seriously.

Years of playing pre-season friendlies and tournaments in Asia saw the English Premier League bag around US$700 million for its Chinese television rights last year, while the NBA’s streaming deal with Chinese giant Tencent is also worth a reported US$700 million.

A local club making inroads is the AFL’s Port Adelaide, which will this weekend play a sold out match against the Gold Coast Suns in Shanghai.

While it may the focus of many a headline this week, Andrew Hunter, Port’s general manager of China and government relations, said the match is just the beginning of the club’s efforts and business interests in China.

“The game itself isn’t the final point, it’s really the beginning and intrinsic to what we’re trying to do, which is bring people from Australia and China together for mutual understanding, for mutual business benefit, and to strengthen, ideally, the bilateral relationship,” he said.

The club first began looking to China in 2014, hosting business lunches in Hong Kong and investing in game development in Chinese schools. Over the years it has created a China Strategy, securing a broadcasting deal, sponsoring Team China and the South China Australian Football League, and coming to see itself as a vehicle for the development of business relationships between Australia and China.

This is “sports diplomacy”, as the club puts it; cultural and language barriers can be hard to overcome in business, but sport can break through.

“If we can bring those people together so they can get a mutual benefit, where investors want to invest and people on the other side are looking for investment, and we can get a commercial benefit out of it, I think we’re playing a really strong role.”

The business community has been growing over the last few years through Port’s China Power Club, in effect a business matching group or forum . Here the club worked in collaboration with the South Australian Government, who would fly a dozen or so high net worth business people in from China for networking opportunities with local business people, centered around a football event.

Looking to freshen up the concept this year, Port Adelaide is working with the state government to host an Investment Attraction Forum at Adelaide Oval in June ahead of Port’s round 13 match against Brisbane.

Here, five South Australian businesses will be chosen to pitch to around 25 potential investors. The government has assisted in selecting in investors, with Hunter explaining those chosen all hold visas predicated on their intent to do business in South Australia.

“Similarly, we want to put them in front of people from South Australia who want to do business in China,” he said.

The government will also assist in vetting the businesses selected to pitch; the opportunity is open to companies from all industries looking for a minimum investment of $2-3 million.

The companies must also be willing to enter into a commercial arrangement with Port Adelaide, with the club to take a “modest success fee” from any deal made through the event.

Hunter said the club is treating this first event as a proof of concept, but believes there is enough appetite to expand it in the future; already in the pipeline is a second event in Shanghai towards the end of the year, with a view to running another two in Adelaide and two in China next year.

“I haven’t found another sports club that does this, but if you’re a business, you need to understand what your assets are, and ours aren’t just what’s on the field.”

You can learn more about the Investment Attraction Forum here.