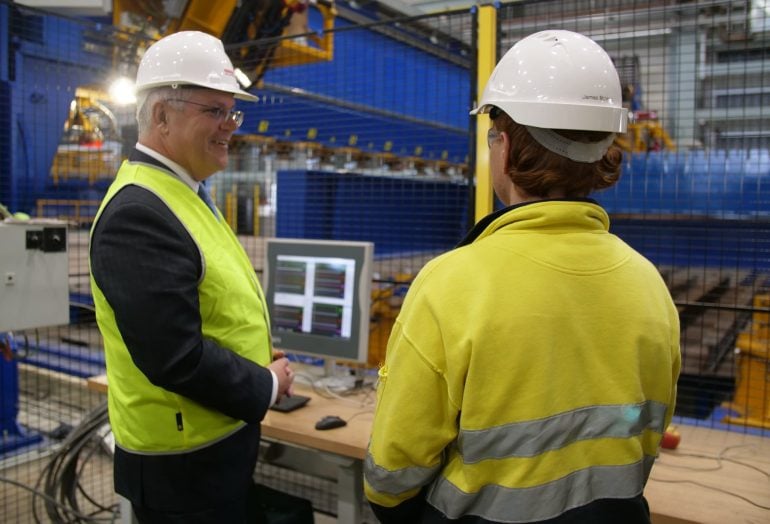 The Australian government is hoping the private sector’s appetite for investment in climate change tech will make it want to partner with the Commonwealth in a $1 billion commercialisation fund to develop new low emissions technologies.

The government is chipping in $500 million for the fund, to be run by the Clean Energy Finance Corporation (CEFC).

Prime Minister Scott Morrison hopes the private sector will match that figure with another $500 million to create a $1 billion investment pool.

“Australia can become a world leader in creating low emissions technology that is both affordable and scalable, helping get emissions down while creating jobs,” he said.

“We are backing Australian businesses by creating an environment for their successful ideas to thrive.”

The announcement comes a day after the government announced an extra $178 million for its future fuels fund to encourage low emission vehicles. The announcement was widely seen as a lost opportunity.

And last week, Byron Bay VC ReGen Ventures announced its $67 million fund to back tech startups with a focus on regenerative technologies.

Despite that growth pool of private sector funds, federal emissions reduction and energy minister Angus Taylor said the fund will address a gap in the Australian market “where currently small, complex, technology-focused startups can be considered to be too risky to finance” .

“The Fund will support Australian innovators to develop their intellectual property and grow their businesses in Australia,” Minister Taylor said.

“Our investment will leverage 3-5x that amount in co-investment from the private sector and other levels of government, or between $84 billion and $126 billion in total investment by 2030.”

The government plans to introduce legislation to establish the fund in this term of Parliament. But there are concerns among climate change advocates that today’s announcement is part of the government’s ongoing campaign to broaden the remit of the CEFC to invest in carbon capture and storage (CCS).

CCS is remains unproven at scale and remains a controversial solution to reducing emissions.

While the government is keen on CCS – it’s central to the Morrison government’s Technology Investment Roadmap – the Senate is less enthusiastic. The upper house has blocked previous attempts by the government to push through legislative amendments to the CEFC’s remit so it can back CCS projects

With an election pending, the new fund to address climate change through tech startups – yet to be created tech is also a key feature of the government’s plan to cut carbon emissions – could be used to wedge the Labor opposition and drive through changes to the CEFC.

Previous article Do you have an abandoned cart problem? Here’s how to improve your online checkout flow
Next article The NSW government just put together a $105 million bag of financial incentives to get more EVs on the roads
Via Politics
Tags auspolclimate technet zeronews